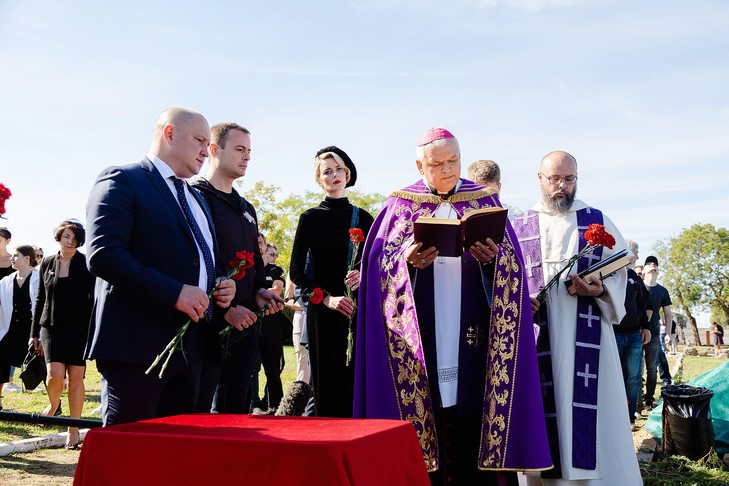 In Crimea, the very political funeral of French soldiers

Lost underground for 160 years, left for seven years in plastic bags, 155 French soldiers have finally received the honors. “We don’t fight with the dead”, insisted Mikhail Razvojaev, the governor of Sevastopol. It was Saturday, October 3, in the French military cemetery of the Russian naval base in Crimea. At the entrance, side by side, flutter the French and Russian flags. Speeches, hymns and religious blessing follow one another before the burial of French soldiers who died during the Crimean War, between 1853 and 1856.

“Beyond the homage, a mark of respect and friendship for France ”, slides at the foot of the monument to the dead Vladislav Lagoïda, one of the employees of the Historical Museum of Sebastopol who, for the occasion, has donned a reconstituted uniform of Zouaves, these African soldiers of the French infantry. Beside him, a soldier in the Russian uniform of yesteryear.

Discovered during a construction site in the suburbs of Sevastopol

“It’s a paradox. We Russians lost this war against France. But, today, we wear their bodies and pay homage to them ”, entrusts one of the twenty Cossacks of Sevastopol charged to cover the coffins of the French flag and to deposit them in the pit. The Marseillaise and the Russian anthem resound, beautifully interpreted by a former Bolshoi singer. A military orchestra from the Sevastopol fleet plays the funeral march. In Russian then in French, the Vatican representative in Crimea delivers the eulogy. “A moment of peace”, explains in aside Mgr Jacek Pyl, auxiliary bishop of the Catholic diocese of Crimea. Before adding in a smile: “The story is complex …”

If the story of these 155 French soldiers is simple, their fate, a century and a half after the Crimean War, has turned into an imbroglio. When at the end of 2012, a construction company launched its site in the suburbs of Sébastopol, the workers discovered human bones. “A bundle of clues quickly allowed us to conclude that they were French soldiers from the Crimean War”, remembers Patrice Georges, the French archaeologist invited to conduct the expertise. “There were thousands of bones, including 88 femurs. They were men, the age and size of soldiers. With their uniform buttons, they were found in the place where, during the conflict, the French had their camp. “ Little doubt then.

A long wait after the annexation of Crimea in 2014

It was in the fall of 2013. At the same time, 700 km north of Crimea, political upheavals in Kiev turned the history of the peninsula upside down. Ukrainian, she became Russian after a referendum in 2014 not recognized by the international community. Vladimir Putin’s Kremlin talks about “Reunification”. Westerners denounce a “Annexation”, the starting point for the sanctions taken by the Europeans and Americans against Russia. The 155 bodies are waiting. They end up in plastic bags, stored in an annex of the historical museum of Sevastopol. “Nothing is happening …”, summarizes Patrice Georges. Russia asks to bury the French soldiers. But, in the eyes of Paris, nothing can be decided because the Crimea, de facto Russian, remains legally Ukrainian.

The Crimea-Russia bridge, the realization of an annexation

“It was a dead end. To unblock the situation, we asked the Kremlin for an exception ”, says Pierre Malinowski. This French passionate about military excavations acts outside diplomatic networks. Former legionary, former parliamentary assistant to Jean-Marie Le Pen in the European Parliament, he does not deny his far right past. But, since moving to Moscow in 2017, he claims to have left politics. Having good connections with the Kremlin, he created a Franco-Russian foundation for the development of historical initiatives, funded by a discreet oligarch.

A forgotten conflict in France

“History will help bring France and Russia together”, enthuses Pierre Malinowski who, last year, found the remains of the Napoleonic General Charles Étienne Gudin de La Sablonnière west of Moscow, more than two centuries after his death during the Battle of Russia. Next step: the excavations launched in Sebastopol and on the Alma plateau to unearth other soldiers of the Crimean War.

“There is a duty to remember because this conflict is forgotten in France. And these bodies are archival sources for understanding the diseases that have killed many more men than the fighting ”, explains Michel Signoli, anthropologist who came from Marseille with part of his team. “An international project”, welcomes next to him, in front of the first six skeletons discovered, Alexander Khokhlov, of the Archaeological Institute of the Moscow Academy of Sciences.

Very quickly, however, the discussion took a political turn, the scientist launching into a tirade to reproach Europeans for not understanding that Crimea is Russian and that “Ukraine is certainly a country with borders but not a nation for all that”.

French people who circumvent the sanctions

In France, this funeral diplomacy worries. “Beware of handling the bodies of soldiers transformed into political objects. The Crimean War has fallen into oblivion in French history. Burying soldiers today is not just an act of homage. It is also an attempt to use them to drape themselves in an international posture ”, confides an academic, recognized anthropologist, very suspicious of the initiatives of Pierre Malinowski. Michel Signoli and the other French guests, employees of the CNRS, academics and civil servants a priori therefore forbidden to officially go to Crimea under sanctions, moreover made the trip as simple tourists coming to spend a study holiday.

The unease is also palpable in political circles. “Pierre Malinowski is closer to the theses of the Kremlin than of the Elysee”, a French diplomat is wary. Pierre Lévy, the French ambassador to Moscow, who did not receive a formal invitation for the funeral, recalled the position of Paris: “We are very committed to honoring our fallen soldiers. But France does not recognize the illegal annexation of Crimea and refuses any instrumentalisation of the memory of its children. “

Widely covered by the Russian media, the funerals and excavations launched at the same time are indeed loaded with political signals. “Lost by the Russians, won by the French, the Crimean War can bring us together. If we bury your dead with honor, it is because we want to have good relations with you ”, ensures in Moscow the historian Yourï Pétrov. “In Paris, there is indeed a Boulevard Sébastopol and a Pont de l’Alma. In Russia, this war is associated with heroism. We defended Sevastopol, a hero city. It is a symbol of Russian Crimea… ”

Does Russia remain a threat to NATO countries?

At the Crimean War Museum in Sevastopol, which recalls the role of the city in the entire history of the country, the visit begins with a portrait and a quote from President Vladimir Putin: “This strategic territory can only be under the sovereignty of Russia. “ Beyond the tributes and calls for Franco-Russian friendship, the message is therefore clear behind the funerals and excavations orchestrated by the Kremlin: if Russia buries French soldiers in Crimea, it is to stage its control on the peninsula.

It was over a century and a half ago, between fears of the collapse of the Ottoman Empire and fears of Russian expansionism.

In Crimea, France and England, together with Turkey and the Italian kingdom of Sardinia, had formed a coalition to prevent the Russian Empire from expanding further south and gaining access to warm seas.

The Crimean War lasted for three years, from 1853 to 1856. It is one of the first global conflicts in modern history.

Out of two million soldiers mobilized in total, nearly 90,000 died in action. But even more are the victims of epidemics, especially typhus: more than 200,000 dead.

The Treaty of Paris of 1856 endorsed the end of the war and the defeat of Russia.