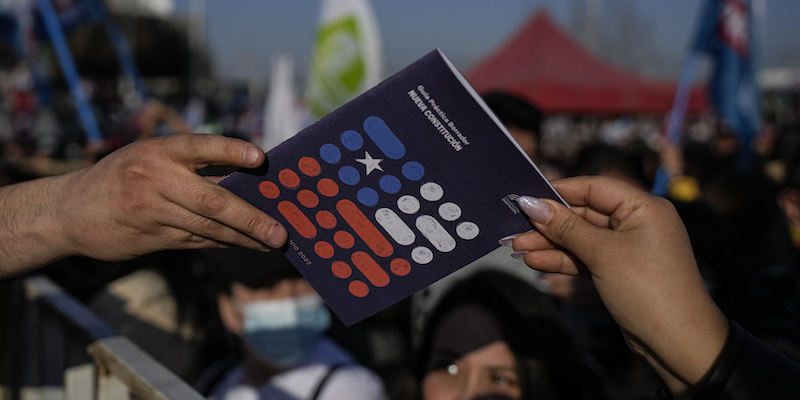 Just over a week ago, the President of Chile, Gabriel Boric, announced the start of a communication campaign dedicated to “informed voting” regarding the referendum on the new Chilean Constitution, which will take place on 4 September. The initiative, which has so far been rather limited, has been presented in general as a means to better inform voters and electricians who will have to decide whether to replace the current Constitution, written during the dictatorship of General Augusto Pinochet in 1980, with that exit from the Constituent Assembly and result of the huge protests that have been held in Chile since the end of 2019.

With the campaign on the “informed vote”, Boric would like to counter the disinformation that has spread around the constitutional text, and which also concerns very important issues such as the right to property and the right to voluntary termination of pregnancy.

Sebastián Valenzuela, a Chilean university professor, called the disinformation on the Constitution “brutal”, made with the aim not only to create confusion in the vote, but also to function as a tool of political attack against the less conservative sectors of society, those who the more they are in favor of voting “yes” in September.

For example, in recent weeks, false news has spread that the new Constitution would not protect private property, and that private homes would end up being owned by the state. This is not the case, of course, and Article 78 clarifies that ownership is a right protected by law and that no one can be deprived of ownership of his assets, unless an expropriation is authorized (possible in some specific cases regulated by law) .

It has also been said that the text would allow women to abort up to the ninth month of pregnancy, but this is not true. Article 61 guarantees the right to abortion but specifies that it will be regulated according to the law in force: that is in case of danger to the life of the woman, for serious malformation of the fetus and in case of rape within 12 weeks, which rise to 14 if the victim is under the age of 14 (in Chile abortion was partially decriminalized in 2017, but remains illegal in the vast majority of cases).

– Read also: What’s in the draft of the new Chilean Constitution

Other false news on topics of great public interest found a lot of space and were then denied by specialized institutions or bodies: such as the one according to which the private health system would disappear (false), or the one on the possibility that migrants from Venezuela also vote or from Haiti.

Nor is the news that there are no fines for people over 60 who will not go to vote, a rumor spread with the belief that most of them would vote to reject the new Constitution: the vote. of next September 4th it will be mandatory for anyone who has the requisites to do so.

Ana María Castillo, co-director of the Nucleus of Artificial Intelligence and Society of the Institute of Communication and Image of the University of Chile, told ADN radio that these attempts to manipulate information are nothing new, but still a lot. present in this election campaign period.

See also  Want to start your career in the state? Internship program in 2022 will have more than 1000 vacancies – Human Resources

A little less than a month after the vote, there is still a lot of uncertainty about what the outcome will be. According to the most recent survey carried out by the analysis company Cadem (published on July 22), 47 percent of respondents would be willing to reject the new Constitution, while only 39 percent would like to approve it and 14 percent said they were undecided. In January, the people who had said they were in favor were 56 per cent, those against 33.

– Read also: From the Pikachu costume to the Chilean Constituent Assembly