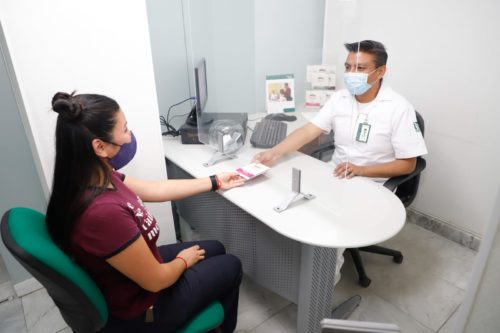 Listen to the note:

The Mexican Social Security Institute has joined efforts to recover in its three levels of care at the national level the routine medical consultations and procedures that were deferred due to the pandemic of COVID-19, such as preventive health care, disease detection and surgical services.

Between May 31 and June 6, the provision of services was focused according to the specialties with the greatest deferral of Outpatient Consultation and Surgery in the Second and Third Level of Care, as well as Integrated Preventive Actions and Family Medicine Consultation in the First Level. All these actions were carried out in an extraordinary way to the usual operation of the medical units.

Said medical activities were carried out within the framework of the National Plan for the Recovery of Health Services deferred due to the health emergency and there was the participation of 19 Decentralized Administrative Operation Bodies (OOAD) and 16 High Specialty Medical Units (UMAE).

The highest demand for outpatient care was in the specialties of Internal Medicine, General Surgery, Traumatology and Orthopedics, Infectology, Oncology, Psychiatry and Pediatrics.

Surgical care was also provided in the specialties in General Surgery and Pediatric, Hip, Spine, Plastic and Reconstructive Surgery.

Among the relevant actions of the strategy are the holding of vasectomy and salpingoclasia sessions in the Second Level of Care medical units in Oaxaca and Sinaloa, in the latter IMSS Representation, 162 Bilateral Tubal Occlusion (OTB) and 15 vasectomies were performed.

For the Representation in Jalisco, the Family Medicine Day and the detection of chronic degenerative diseases were held, in addition to attending to those patients who were deferred for trauma and orthopedic surgery with knee arthroplasty surgery.

In the Western State of Mexico 26 specialties were activated in Outpatient Consultation for the recovery of Health Services, as well as surgical activities in General Surgery, Gynecology and Traumatology and Orthopedics.

For its part, the Torreón Specialty Hospital performed two corneal and two kidney transplants. Also surgical days of Traumatology and Orthopedics, with recovery in radiology and image service with a day of magnetic resonance and outpatient neuropediatrics.

For its part, at the Hospital General Regional 1 de Querétaro two kidneys were obtained from a cadaveric donation, which were successfully transplanted en bloc to a patient at the UMAE Hospital de Pediatría del CMN de Occidente, the recipient is reported in good general condition .

The UMAE of Puebla IMSS scheduled the extraordinary local day for patients with spondylolisthesis L5-LS1 with a surgical plan Liberation of the lumbar segment L5-S1 and transpedicular stabilization, highly complex surgery.

For its part, the UMAE of Traumatology in Magdalena de las Salinas Total knee and hip arthroplasties and shoulder and knee arthroscopies were performed, in addition to 606 consultations, 99 surgeries, 10 Tomography studies and 13 Nuclear Magnetic Resonance studies.