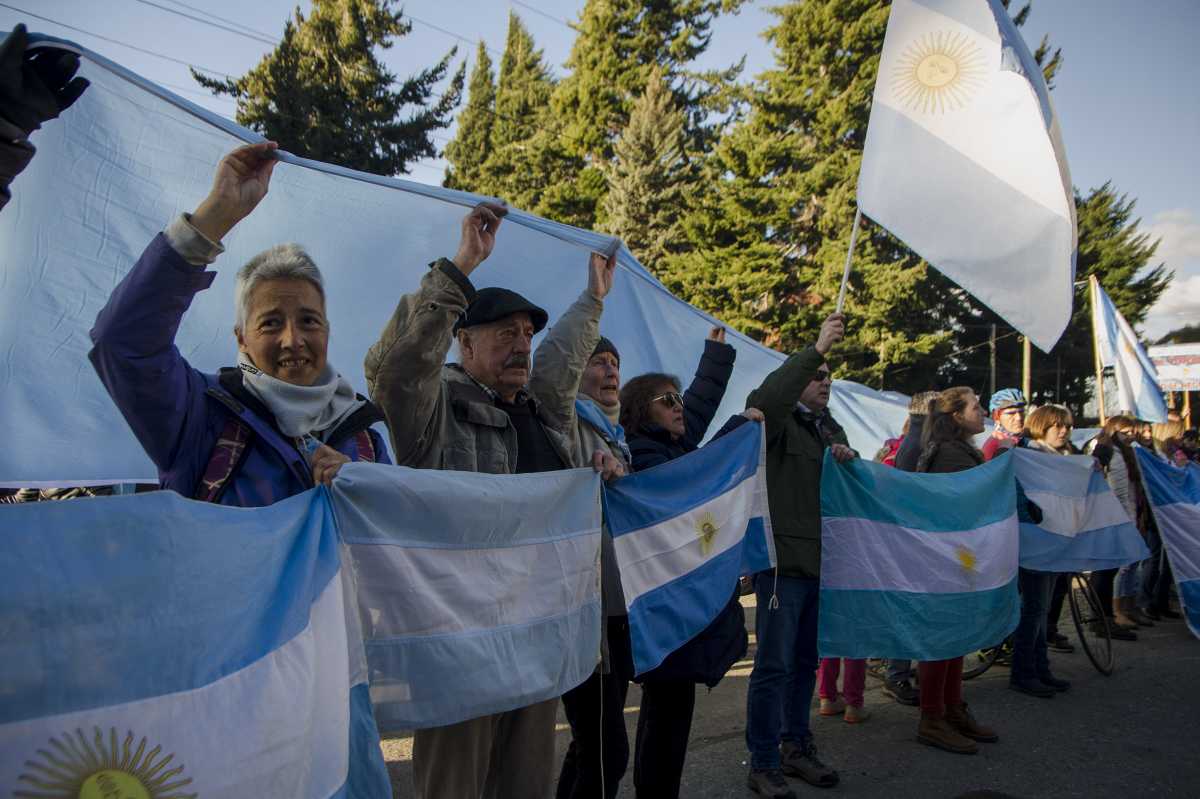 Las Argentine flags and military marches were the common note in the mobilization carried out this afternoon in Bariloche by a large group of people who expressed their rejection of the territorial recognition achieved by a Mapuche community on a property that is also claimed by the Ministry of Defense.

The call “hug” to the “Juan Domingo Perón” Mountain Military School summoned some 300 peoplewho sang the anthem twice, read a declaration of support for the Army and took photos of themselves at the front of the military garrison, located at kilometer 9 of Bustillo Avenue.

Minutes earlier the group had concentrated on the Virgen de las Nieves roundabout, a short distance from where the Tripay Antu and Millalonco Ranquehue communities are located.

The latter presented a lawsuit several years ago, which last February had a favorable first-instance ruling, later ratified by the Federal Chamber of Roca, which orders the national State to hand over the community property of 180 hectares.

At the request of the Defense Ministry, Army lawyers appealed that sentence, with the expectation of reaching the Supreme Court. They argued that this territory is essential for the training of mountain troops.

The protesters set up a caravan of vehiclesmany of them carrying banners, who went to the door of the military establishment (about three kilometers away), where they performed a brief act, without cutting off traffic.

One of them, Carlos Ávila, said that they were there “to defend an outstanding institution, to which the lands correspond, and it needs them to carry out its activities”. He interpreted that “the political power and submissive judges they are provoking something that is no longer enough”.

Ávila is retired from the Army, he lamented that “all of Bariloche” was not in the embrace and extended his criticism to “big foreign capitalists like Mr. Lewis, that they have land that nobody explains how they could obtain it, and that a lake is closed”.

Participated in the call falklands veteransrepresentatives of the PRO party such as the national deputy Hannibal Tortoriellothe Rio Negro legislator Juan Martin and the local reference Sergio Marcozzi.

Also present were the resident of Villa Mascardi Diego Frutos (complainant of the Mapuche community settled there), some businessmen, retired officers of the armed forces and “self-summoned” neighbors, who had already organized a similar hug in October 2020when the Army evicted and destroyed a community garden in the Millalonco Ranquehue community.

Many women participated, including Elena Enríquez, who introduced herself as a “journalist” and a reference for the National Defense University. “We come here to express our support for the Army, because at this rate it will be left without a presence in Bariloche -he claimed-. If they dismantle this school, who is going to bring support to the Southern Line, who is going to assist in emergencies?”

At the beginning of the act, a middle-aged man took the microphone to exclaim that “Patagonia will always be Argentine” and shout several times with military fervor “long live the homeland.” Then they sang the anthem, the song Aurora and the march of San Lorenzo. The doors of the military garrison were open but no uniformed man came out.

Enríquez read a statement, according to which “it is not a mere whim to want protect the lands guarded by the Argentine Army since 1934”. He recalled that the current governor Arabela Carreras He presented a project to create the Central Park of Bariloche there, which would function as a “green lung” and as a sports and recreational space. And he contrasted that proposal with the claim of the Mapuche communities that, according to what he said, impose “the risk of transforming these lands into an urban area” and advance in “the destruction of the natural and cultural heritage of our Patagonia.”

Said they proposed embrace the military school “for everything it represents and because it is closely linked to the history of the area”. He recalled that there are only three similar schools in America and the one that works in Bariloche needs the disputed territories “to practice skiing and mountaineering.”

“Enough of so much outrage, enough of usurpations, enough of corruption said Enriquez. There is no peace without Justice”. The organizers had asked that no one carry signs with slogans or sector identifications, but only argentinian flags, which were the vast majority.

However there were some signs that said “Argentina or komunism”, “without justice there is terrorism” and “with terrorists there is no negotiation”. A flag was also unfurled with the Argentine colors that requested “everyone leaves”.