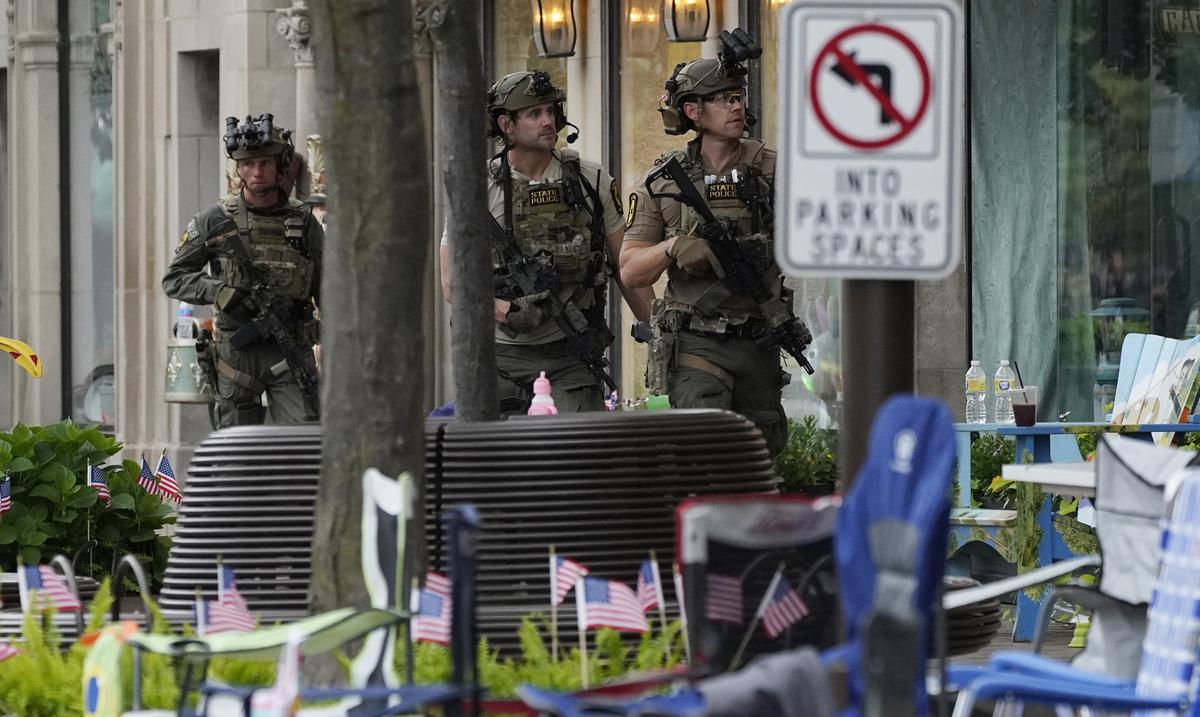 Illinois parade shooter fired more than 70 bullets, then posed as a female participant

Illinois — The man who gunned down an Independence Day parade near Chicago fired more than 70 bullets from an AR-15-style weapon, then evaded initial capture by dressing as a woman and blending in with the fleeing crowd, the police said Tuesday. Policeman.

The suspected shooter, who was arrested Monday night, used a high-powered rifle “similar to an AR-15” to fire bullets from the top of a commercial building into a crowd that had gathered for the parade in Highland Park. , a tight-knit community on the shores of Lake Michigan that has long attracted the rich and sometimes the famous.

The shooting killed at least seven people and more than 30 were injured in the attack, the task force spokesman said. Christopher Covelli.

Investigators who questioned the suspect and reviewed his social media posts did not determine a motive for the attack or find any indication that he targeted anyone based on race, religion or other protected status, Covelli said.

Earlier, agents of the FBI They looked inside trash cans and under picnic blankets as they searched for more evidence at the site where the shooter opened fire.

The shots were initially mistaken for fireworks amid the national holiday parade in Highland Park, a Chicago suburb on the shores of Lake Michigan where the rich and even famous often go.

Within the police perimeter, ordinary artifacts such as strollers and lawn chairs abounded, abandoned by terrified neighbors when shots rang out. Some people came to the outskirts to collect the belongings they had left behind.

Authorities took a suspect into custody Monday night after conducting a traffic stop that degenerated into a brief police chase. The individual was initially said to be only a person of interest, but on Tuesday a police spokesman confirmed that he is now considered a suspect.

Charges will be announced later in the day, said a spokeswoman for the Lake County District Attorney’s Office, Sarah Avalos.

The authorities at the moment have not revealed what motive the aggressor would have had. The shooting on a July 4 is added to other events that have shattered the rituals of life of the Americans.

In recent months, schools, churches, grocery stores and now community parades have become the scene of massacres. This time around, bloodshed ensues as the nation tries to find a reason to celebrate its founding and the ties that still hold it together.

“It definitely hits you a lot harder when it’s not only your hometown, but it’s happening right in front of you.”said the resident Ron Tuazon as he and a friend returned to the parade route Monday night to collect chairs, blankets and a children’s bike that he and his family abandoned when the shooting began.

“Now it’s normal”Tuazon said of what he called yet another American atrocity. “We don’t even blink anymore. Until the laws change, it’s going to be more of the same.”

The shots were fired at a point along the parade route where many residents had lined up earlier in the day to get a prime view of the annual celebration.

Among them was the family of Nicholas Toledo, who was in his 70s and visiting from Mexico when he was shot. She died on the spot, her granddaughter said, Xochil Toledo, to the Chicago Sun-Times. he passed away too Jacki Sundheima member of the nearby North Shore Congregation Israel synagogue, who announced her death on its website.

In their wake they left a trail of abandoned objects that showed daily life that was suddenly and violently interrupted: a half-eaten bag of potato chips; a box of chocolate chip cookies scattered on the grass; a children’s cap from the Chicago Cubs baseball team.

“There is no safe place”said Barbara Harte73, a Highland Park resident who, fearing a mass shooting, had stayed away from the parade but then ventured out of her home.

Highland Park Police Chief, Lou Jogmensaid an agent forced Robert E. Crimo III to stop while driving about five miles north of where the shooting occurred, several hours after police released the photo of the man and an image of his silver Honda Fit, warning the public that he was likely armed and dangerous. Authorities initially said he was 22 years old, but an FBI bulletin and Crimo’s social media said he was 21.

Lake County Coroner, Jennifer Baneksaid that five of the fatal victims were adults, but had no information on the sixth.

Police have not released details about the victims, but Toledo’s granddaughter told the Sun-Times that her grandfather had lived most of his life in Morelos, Mexico.

Xochil Toledo remembered seeing her grandfather as the band paraded in front of him.

“I was so happy, happy to live that moment”recounted the granddaughter.