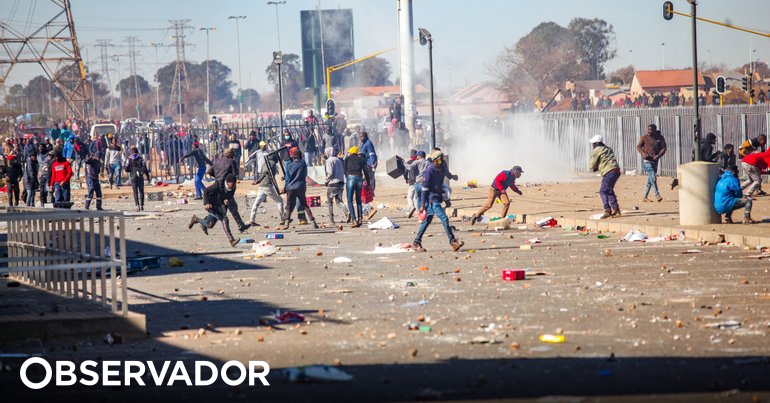 “We are extremely concerned, we are still attentive to the evolution of the situation and we are hoping that the authorities and especially the South African people will be able to resolve this crisis”, says Alexandre Santos, who guarantees that he is not aware that Portuguese communities are organizing themselves in vigilante groups or militias to protect their properties, although I recognize that this can happen at the individual level and that, in the future, should the situation deteriorate, this possibility cannot be ruled out.

Portuguese Ambassador to South Africa urges the approximately 450,000 Portuguese in the country to “stay at home”

“In community terms, there is no movement to defend, in an armed way in particular, our establishments and residences. For a while. I do not rule out the possibility of this happening, but there is no desire or any attempt, nor does it seem to me that there are grounds for organizing ourselves in this regard”, reiterates Alexandre Santos, currently retired — although doing work as a translator and interpreter — later of having worked in industrial and commercial risk assessment for the insurance industry.

Aware of the political and social reality of South Africa, Alexandre Santos says that a scenario of civil war is something that most South Africans do not want. However, he notes that political tensions within the African National Congress (ANC) — the historic party of Nelson Mandela, of which Cyril Ramaphosa and Jacob Zuma are part — are “increasingly deep”, which may have unpredictable consequences for the future of the country.

Ramaphosa became President of South Africa in February 2018, having won the ANC presidency at the end of the previous year, defeating Nkosazana Dlamini-Zuma, the ex-wife of Jacob Zuma. With the arrival of a new President, there was also a promise to fight corruption, which left the former head of State, targeted in several suspicious cases, in a sense.

Protests continue across various parts of South Africa ????????. Supporters of ANC struggle stalwart Jacob Zuma, have taken to the streets to call for his release from prison #FreeJacobZuma #SAShutdown

Zuma tried to resist and refused to testify in a commission that investigates corruption cases during the mandate (2009-2018) of the former President, which made him sentenced to 15 months in prison, at a time when he faces another lawsuit for corruption, money laundering and fraud related to an arms deal in the late 1990s. However, after the initial refusal, Zuma ended up turning himself in to the authorities, which gave rise to the escalation of violence.

But what in the words of analyst Christopher Vandome was, at an early stage, a “political protest by Zuma supporters to demonstrate the unpopularity of the court’s decision”, quickly turned into “protests against the socio-economic difficulties in the country, moving , also, for criminal activities”, which showed how “fragile and volatile is the socio-economic landscape of South Africa”.

Peace and stability in South Africa is directly linked to the release of President Zuma with immediate effect.

It was just pure malice to incarcerate President Zuma whilst litigation on his Detention Without Trial case (for a civil contempt) was on-going.#WenzenuZuma

In one of the most unequal countries in the world, where, according to Reuters, half the population lives below the poverty line and unemployment rate is 32%, Zuma’s arrest turned out to be the “spark” that triggered an unprecedented wave of chaos, where the population’s desperation for food and essential goods was mixed with the political use of groups close to former President Zuma, who took advantage of the void of security left by the authorities and the lack of response to the problems of South Africans to instigate violence — the Jacob Zuma Foundation made a post on Twitter saying that “peace and stability in South Africa are directly linked to the release of President Zuma with immediate effect”.