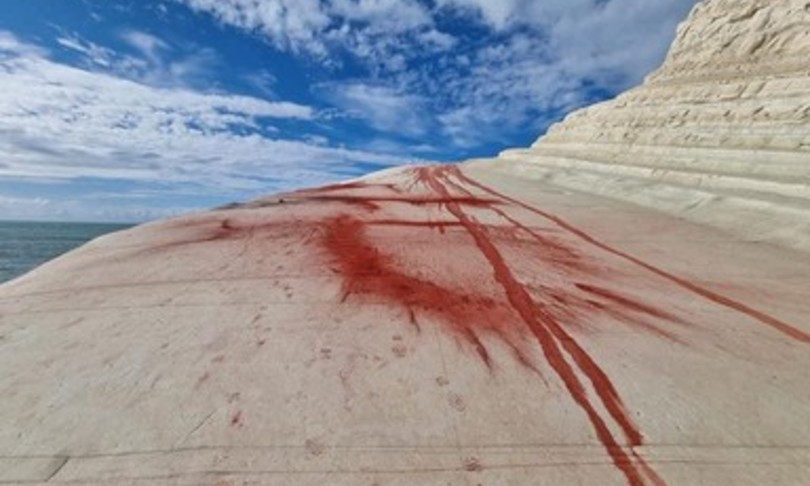 Identified the two vandals who defiled the Scala dei Turchi

AGI – The Public Prosecutor of Agrigento has identified the perpetrators of the damage to the Scala dei Turchi, smeared with a red substance in the night between Friday and Saturday. The investigation, initially against unknown persons, had been opened for damage to an asset with a landscape value.

The carabinieri acquired the images of the video surveillance system in the area and started investigations on the sale of the product used for the soiling, tightening the circle in a few days. Sunday morning already the marl cliff was cleared by volunteers: a gesture of extraordinary civility that was also exalted by the president of the European Parliament, David Sassoli, in one of his last messages before dying from a serious illness.

The two authors of the vandalic raid have been identified in the Scala dei Turchi, a Sicilian landscape jewel, smeared with red chemical substance in the night between Friday and Saturday: confirmation also comes from the Prosecutor of the Republic of Agrigento. “Following a house search and the seizure of things pertinent to the crime”, explains the prosecutor Luigi Patronaggio, “the carabinieri of the Agrigento Company reported, in a state of freedom, to the Public Prosecutor of Agrigento DQ and FG both of Favara, as they were held responsible for the damage to the Scala dei Turchi. As evidence against the two denounced – he adds – the soldiers of the Arma have adduced the images extrapolated from the video surveillance systems of the places and the outcome of the ordered house searches “.

One of the two alleged perpetrators would therefore be Domenico Quaranta. A “Multiprejudiced with various judicial and police precedents including an attack on the Milan metro and another in the Valley of the Temples in Agrigento“,” as well as another damage action against the Punta Bianca marl “, between 2001 and 2002, after an alleged conversion to Islam in prison. The same, in the past has been subjected to preventive measures and recently a similar request was rejected by the court but is subject to the prohibition of approaching Agrigento ordered by the police headquarters “.

As for the reasons for the gesture “it is assumed – adds the prosecutor – an attitude of generic and vague protest against the system and the police, as can be seen on the social media pages of the same suspect “.

A little less than 48 hours, then. The carabinieri of the Agrigento Company took so long to give a face – painstakingly reconstructing what had happened the night between last Friday and Saturday at the Scala dei Turchi in Realmonte – to the alleged perpetrators of the vandalic raid that he defaced, with oxide powder iron, the white marl cliff.

Two were reported to the Agrigento Public Prosecutor’s Office for the crime of damaging goods having landscape value. The Carabinieri of the Agrigento Company managed to shed full light on the identity of the perpetrators of the serious damage, using the images of the video surveillance systems and a barrage of searches and checks carried out between Realmonte and Favara, also passing through Porto Empedocle and the city of the Temples. The investigative file, initially opened against unknown persons, was coordinated by the Agrigento prosecutor Luigi Patronaggio and the substitute Chiara Bisso.

The video surveillance footage made it possible to ascertain that a van, a Ford Transit, arrived at the Scala dei Turchi in the evening; then two people got out of that vehicle, dragging mysterious sacks, those that contained the iron oxide powder. After a careful and repeated analysis of the images, the Carabinieri managed to acquire the license plate number of the van.

From that moment on, it was a frenzied race to put firm points in the investigation of a case that caused a sensation and outrage worldwide. The suspicions of the Carabinieri immediately focused on a man from Favara, already known for similar damage.

Its identification in Favara and the inspection of the van made it possible to find traces of iron oxide dust. The subsequent searches made it possible to find, inside the inspected warehouses, gloves soiled with the same powder and further, unequivocal, evidence. Meanwhile, the Scala dei Turchi – well candidate to become a UNESCO World Heritage Site – was cleaned up by an army of volunteers.

The wound to the landscape and the beauty of Sicily was in fact immediately healed. These are the declarations of Colonel Vittorio Stingo: “The Arma dei Carabinieri intervened immediately to immediately identify the perpetrators of this crime by villains who defaced one of the most important landscape assets of Sicily. territory in defense of our citizens and natural beauties “.