Even a good 70 years after its birth, the VW bus, as the forefather of all motorhomes, is still the benchmark in its class. With the introduction of the fully electric ID.Buzz last year, a first step into the future of e-mobility was taken, but only with the car and cargo variants of the modern Bullis. For the all-electric successor to the California, the emotionally-triggered fan base still has to muster a good deal of patience. Volkswagen Commercial Vehicles does not intend to launch the camper variant of the ID.Buzz until 2025, when the long version of the Bulli-Stromer is available.

Those who don’t want to wait that long will now find an alternative for the first time: At the CMT leisure fair in Stuttgart (caravanning, motor, tourism), a first camper extension for the ID.Buzz is celebrating its premiere. Alpincamper, a small manufacturer and specialist in mini campers, is transforming the E-Bulli into a hip vehicle for the booming “van life” – albeit at handsome prices. 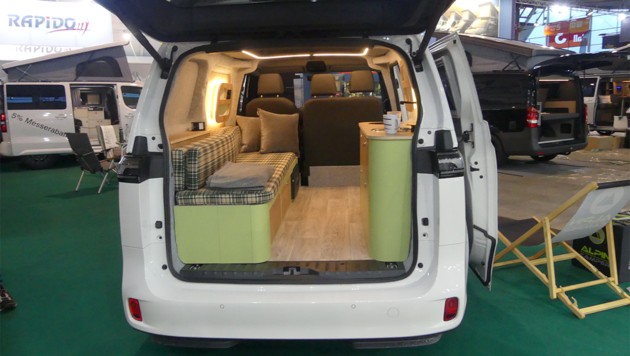 “For me, the ID.Buzz is currently the only van that is suitable for upgrading to an electric camper,” explains company boss Michael Zaiser, because in his opinion a realistic range of 300 to 350 kilometers ensures at least a halfway acceptable range of action and an 80 -percent charge should be completed in 30 minutes with a direct current fast charger with a maximum of 170 kW. According to WLTP data, the combined standard consumption of just over 20 kWh/100 km would theoretically result in a range of around 400 kilometers. The 77 kW battery (gross 82 kW) is located in the underbody and supplies the 150 kW/204 hp electric motor, which drives the rear wheels with a maximum torque of 310 Nm. Top speed: 145 km/h.

It is also clear, however, that the variant currently offered on its own, with a short wheelbase, 4.71 meters overall length and overall smaller dimensions, at best meets the travel needs of two people. The yardstick of a California expansion can therefore by no means be set here.

This is how the camper is set up
The Alpinecamper extension is based on the cargo variant of the ID.Buzz, so it offers space for a total of three occupants in the front with the second bench seat next to the driver’s seat. Behind it on the left-hand side is a bench seat that can be extended in the sleeping configuration to form a 1.95 by 1.20 meter double bed. The bench substructure is used for three drawers. One of them houses a 20-liter compressor cool box, the other two serve as storage space.

On the right-hand side of the prototype, there is a small kitchenette with an induction hob, a mini sink with fresh and waste water canisters, each with a volume of 12 liters, and storage compartments for kitchen utensils. A small, rectangular lifting roof from Reimo still guarantees headroom in this area.

It won’t be cheap
Michael Zaiser does not name a specific all-inclusive price for the ID.Buzz expansion, which was only completed immediately before the Stuttgart trade fair. However, a tariff well above 80,000 euros can be expected, since the VW van alone is estimated at over 64,000 euros.

For Alpinecampers, the ID.Buzz is the first e-car expansion. This year, Zaiser wants to complete another electrical project that the brand LEVC (London Electric Vehicle Company), which belongs to the Chinese Geely Group, once announced full-bodied, but then fell victim to the red pencil: a mobile home based on an electrified one London Taxi. Although this is exclusively powered by an electric drive, in contrast to the ID.Buzz it still has a combustion engine on board as a range extender. Cult character is certainly also in play here.

Incidentally, VW also offers minimalist camper equipment for the ID.Buzz, but this is not an expansion. But at least in the rear there is a pull-out two-burner gas stove, a pull-out sink and space for two water canisters. In addition, the entire area behind the front seats can be converted into a bed. (SP-X)