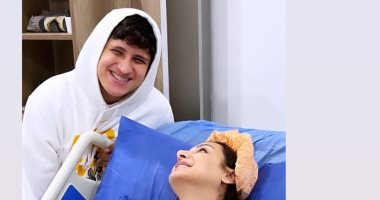 Ibn Angham publishes a new picture of her from the hospital: You are safe, six teachers

Abdel Rahman, the son of the star Angham, revealed a new photo of his mother from the hospital after she underwent two surgeries, after she suffered a health crisis.

Abdel Rahman appeared in the photo, smiling and looking at the camera, while his star mother, Angham, was looking at him, and she was also smiling, and “Body” wrote in his comment on the photo: “You will be safe, God willing, six teachers,” and attached this comment to the emoji of red hearts.


Angham is in the hospital with her son next to her

This comes after the star Angham was exposed to a health crisis, after which she was transferred to a hospital, where she underwent a delicate surgery in the shoulder as a result of her suffering from severe pain in the shoulder tendons.

At the same time, she also underwent surgery on the wrist, due to problems with the tendons of the hand, and she is now in a stable condition after recovering from general anesthesia, and she will undergo a six-week convalescence experience in which she will have to place her right forearm on a pregnant woman in parallel with physical therapy.

The star, Angham, had released her latest songs, “Bad Painting” via YouTube, from the words of Nader Abdullah, composed by Amer Ashour, and distributed by Tarek Madkour. Very special”, where he wrote the song “Ya Ritik Fahimni”, which caused a stir as soon as it was released on YouTube, and through one of the lyrical applications, especially since its launch coincided with Valentine’s Day this year.