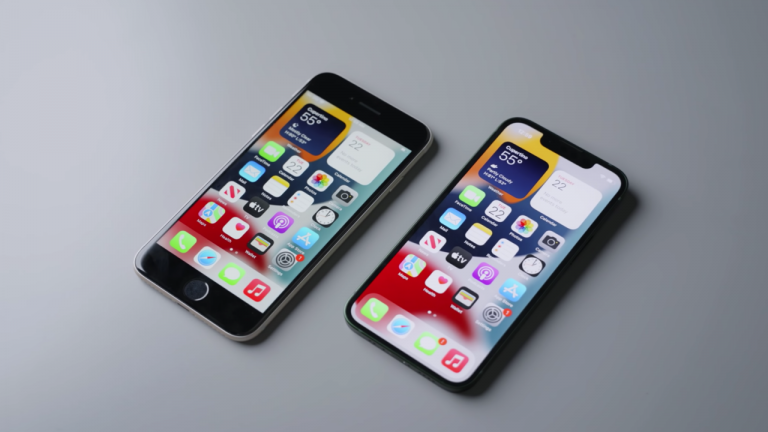 I went from an iPhone 8 to an iPhone 13 mini: my opinion after a month

After using an iPhone 8 for over 3 years, I was able to get my hands on an iPhone 13 mini. Here is my feedback on this transition, which could not be more personal, but which I hope will give you an idea of ​​the feeling in real use of the unloved of the recent iPhone range, coming from someone accustomed to the format before iPhone X notch.

The interest of this analysis is to share small details that are not necessarily obvious to notice and that do not appear on the tests, but still have their importance.

My smartphone profile: between large and small screens

During my career, I was able to test the three most popular operating systems for smartphones. My first camera was (unfortunately) the HTC 8s sous Windows Phone. This OS was far from being a piece of cake and for good reason, it was abandoned by Microsoft after only a few years of existence, simply due to a lack of applications and sales. After this debacle, the time had come for me to upgrade to my first iPhone: the iPhone 5c. The small 4-inch screen was the norm and its blue version won me over.

After 4 years of loyal service, my desire for change led me to a Samsung Galaxy S8. To me the large 5.8-inch OLED screen, and the discovery of the Android universe. But the inconsistency of the ecosystem and wonky unlocking methods pushed me over the edge. I wanted to find iOS and especially switch to a more compact format. This is how I set my sights on the iPhone 8, which I kept for 3 years.

Finally, thanks to JVTech, I had the opportunity to switch for the first time to the latest iPhone, the one sporting the smallest format: the iPhone 13 mini. Here’s what I take away.

Design and handling: similar but so different

It doesn’t look like that, but the iPhone 13 mini has a more compact size than the iPhone 8. The latter’s thick top-to-bottom bezels make it taller, even though the screen is only 4.7-inches. The 5.5 inches of the 13 mini are due to thin borders and a notch sporting the front camera and FaceID, a facial recognition unlocking system.

I place practicality at the center of my smartphone decision. I need to be able to use it with one hand, in situations where I have to take it out of my pocket as a tightrope walker to type a message for example. Of course, I appreciate small formats, and that’s why this 5.4 inch, unrivaled in its price range, is the choice that suits me the most.

On the other hand, even if the total dimensions are reduced on the 13 mini, in use, the iPhone 8 remains the one that requires the least finger gymnastics. Indeed, the larger screen of the 13 mini extends higher and therefore you have to look further to reach the control center (top right) and the notification center (top center).

The latest iPhone’s flat edges make it easier to handle, even though it’s inconceivable for me not to wear a case. If the latter is made of silicone, you may feel a slight difference with the iPhone 8, which is thinner and which slips a little more easily into the pocket.

The screen: day and night

When I first turned on the iPhone 13 mini, I saw the difference right away. With OLED, it’s as if the content on the screen seems more real and present before my eyes, while the LCD gives a more distant aspect to the image.

On the brightness side it’s the same thing, the 13 mini is at a level where even in full sun we can clearly distinguish the elements of the screen, where the 8 abandons me in this kind of condition.

The screen ratio has also changed my habits. Going from 16:9 to 19.5:9 means you can watch a Twitch stream while viewing the chat sideways and without having so much wasted screen real estate and having to squint to see what’s on. happens.

The status bar, which houses useful information at the top of the screen, has been revised. Who says notch says elements pushed to the sides but above all simplified. The operator name no longer constantly and unnecessarily appears at the top of the screen, but we no longer have the battery percentage. This bugs me a little because I like to know exactly how much I have left. To do this, I find myself having to swipe towards the control center.

On notched iPhones, the status bar takes up the full height of the latter, so the items displayed are larger. I find that things like the time, network, or Wi-Fi are much more readable than on the thin top bar of the iPhone 8.

The 13 mini’s gesture navigation is probably the biggest difference, and in my opinion that’s a big yes compared to the iPhone 8. A simple swipe to instantly return to the home screen is better than having to tap the center button on the 8. There’s also a delay between button tap and action as a double tap activates multi -task. The latter is accessible via a swipe up and a slight pause on the 13 mini, and you can swipe left or right with the virtual bar to switch from one application to another. It changes life.

To open the control center, you have to swipe from the top right down on the 13 mini, and from the bottom up on the iPhone 8. It makes all the difference when watching a YouTube video. If you want to bring up the control center on the 8, the swipe from the bottom will first display the video recommendations, and it takes a second swipe to finally get what you want. We don’t have this problem on the 13 mini, it’s a small detail but that changes everything.

FaceID vs TouchID: the big debate

This is what most differentiates the two models: the unlocking system. And this is where I am most divided, because the method of each of the two iPhones has its advantages and disadvantages. It’s a little complicated so here’s a little table not stung beetles.

Previously, I could never enjoy a notched iPhone. I doubted those who told me that it disappears with use, and I was wrong. We told you and I confirm it: the notch is not disturbing in daily use. The eyes are focused on the central part of the screen.

3D Touch vs Force Touch: we go with it

The iPhone 8 is one of the last iPhones to be equipped with 3D Touch, which allows you to perform actions by pressing more or less hard on the screen. Personally, I use it all the time to open the quick actions panel by pressing firmly on an app icon, or tapping on the left edge of the screen to show open apps.

Since the iPhone Xr 3D Touch is gone, and it’s been replaced by Force Touch, which can be boiled down to a long press. This is still useful, but you have to wait 1.5 seconds, which becomes very long when you repeat the operation many times a day.

Nevertheless, the gesture navigation of the latest iPhones makes 3D Touch less necessary, and above all it made it possible to compensate for the relative slowness of the iPhone 8 in 2022, a downside that the iPhone 13 mini of course does not have.

The iPhone 8 is the latest generation of Apple smartphones with mediocre battery life, and it really shows. Since I got the iPhone 13 mini, I never worry about how much battery I have left, as long as I can charge here and there when I have time.

With the iPhone 8, it’s a bit of constant stress as soon as you drop below 20%. However, the 13 mini is the least enduring of the latest models but puts a nice slap in the face to its opponent. Holding the day easily is an important milestone for my peace of mind, and only one of the two reaches it.

Fluidity is also difficult to compare. Four generations of processors separate the two models. Applications launch a little faster, as do shortcuts or various actions. It’s light but not negligible.

Photo and video: one is good, the other is excellent

With a single camera on the iPhone 8, complicated to compete with the ultra wide-angle of the 13 mini. Concretely, in a context of strong luminosity and without particular difficulty, the two are comparable but otherwise, I find it hard to go back to 8. Attention, the old model remains very correct.

For video, HDR is better controlled on the 13 mini but since the iPhone has been well ahead in this area for several years, the iPhone 8 is far from ridiculous.

The price: what makes all the difference

How not to talk about the price. To be honest, I don’t think I’ll be using an iPhone like the 13 mini at 100% capacity and therefore don’t find the point of spending €809. But objectively, it’s an awesome toy for those with that kind of budget aside.

As a fan of small formats, these two models are the only choices left to us by Apple, where Android does not even set foot. Paying a lot of attention to price, I find the improvements made to the 13 mini very pleasant but not sufficiently justifying the price difference.

When Apple introduced the iPhone 12 mini, it was the embodiment of the format I was looking forward to. This is surely the last iPhone mini so you might as well make the most of it.

Tests of the latest iPhones