“I know the problem, I’m not ignoring it,” Alberto Fernández said before the highest inflation of the year was released

“I know the problem, I don’t ignore it,” Alberto Fernández said about inflation

Hours before the famous inflation of the month of July, which according to private measurements will be the monthly index highest in the last 30 yearsassured President Alberto Fernández that he was not ignoring “the problem”.

“I know the problem, I don’t give up, I fight every day to see how to find a way out of a problem that is not only Argentinian, it is a problem unleashed all over the world”, assured the head of state in the province of Chaco during an act he shared with the governor Jorge Capitanich and the ministers Jorge Ferraresi, Juan Zabaleta and Gabriel Katopodis.

The resignation of Martín Guzmán was one of the political factors that promoted the rise in prices in a complex domestic and international context. July inflation is projected to exceed 7 percent. To find a similar monthly record, you have to go back to the beginning of the 1990s, when Argentina began to leave behind the hyperinflation of the Raúl Alfonsín government.

“I know we have a lot of problems to solve. I don’t want to stick to a speech where you say: “Doesn’t this guy see what’s going on with prices?” Sure I see it. That’s why we left all the parities open so that salaries match inflation, that’s why yesterday we announced the increase for retirees and a special bonus so that retirees’ salaries match inflation“Fernández assured during his speech.

See also  In an important session .. Al-Khatib calls on Al-Ahly players to close the page of the past

“And in the meantime, we are making the corresponding efforts of the state to solve the inflation problem,” continued the president, “and call on everyone, those involved, to help to solve the problem. Argentina is growing, it is creating jobs, we have to solve this problem as a society so that growth is fair, equitable, and we all live peacefully.”

Alberto Fernández’s statements were given within the framework of an official activity that this Thursday in the city of Villa Angela (Chaco), in which a delivery of houses was made and he visited a dairy cooperative, accompanied by the local governor Jorge Capitanich. The heads of the Ministries of Social Development (Zabaleta), Public Works (Katopodis) and Territorial Development and Habitat (Ferraresi) also participated.

Regarding the presidential activity, the president pointed out that “the State is the one that has to equalize where inequality has appeared” and questioned that during the previous government they “believed that the housing problem should be solved by the market.” 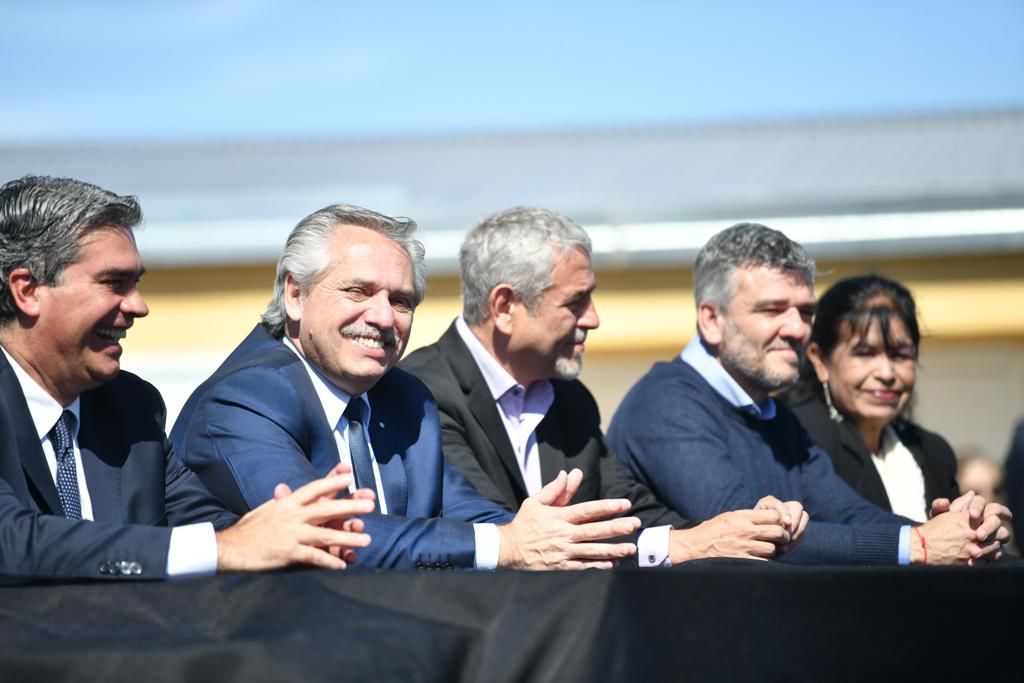 Alberto Fernández with the local governor Capitanich and ministers Ferraresi, Zabaleta and Katopodis (Presidency of the Nation)

A few hours after the July inflation data were known and while Alberto Fernández was visiting Chaco, the Central Bank of the Argentine Republic raised the reference rate by almost 10 points to 69.5 percent.

Indec will then finally reveal this afternoon how much the impact on prices was of the exchange rate crisis generated by the exit of Martin Guzman as Minister of Economy, at the beginning of last month.

That resignation, in a context of weakness in terms of reserves on the part of the Central Bank, the import stock and the arrival at the Palacio de Hacienda of Silvina Batakisa figure associated with Christianity that caused not tranquility, but rather greater discomfort, caused inflation to hit a new jump in July.

After that scenario and the arrival of Sergio Massa to the economy, the government was able to “what was an attempt at a run on the exchange rate and speculation that was a devaluation,” according to the spokeswoman for the presidency, Gabriela Cerruti , this morning. In this new context, indicated that “there is a sense of stabilization.”

“There is a sense of stabilization and we could face an attempt at a run on the exchange rate,” says Gabriela Cerruti
Juan Cabandié called for the resignation of the officials who declared the Lanín volcano a “Mapuche sacred place”.
Ricardo Lorenzetti and magistrates from around the country discussed the work of border judges