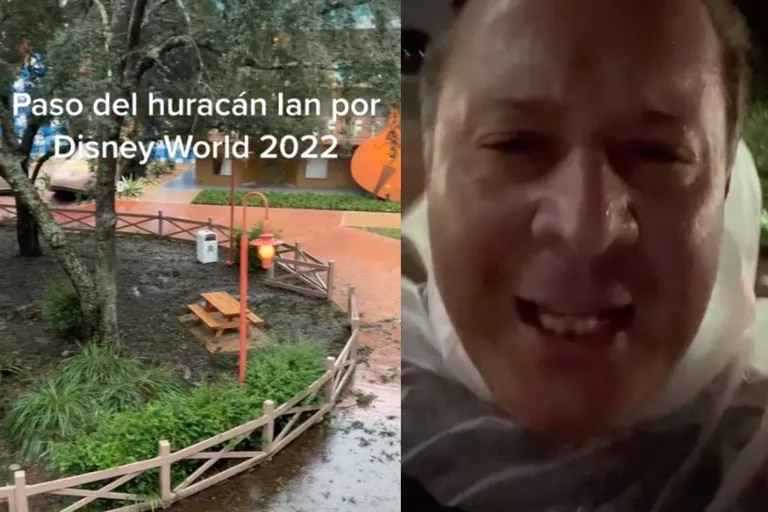 Hurricane Ian in the “happiest place on earth”: this is how she lived her time in Walt Disney World and other parks

They say there is no place happier and more magical than Disney and that is why the parks and hotels receive millions of visitors every year. This time, however, the discussion of some coincided with the arrival of Hurricane Ian in Florida. In social networks, Orlando’s major theme parks have announced their closures for Wednesday and Thursdayhours before this metrological phenomenon came ashore as category 4.

Faced with imminent danger, Walt Disney World, Universal Orlando, SeaWorld Orlando, Aquatica Orlando, Discovery Cove and Busch Gardens Tampa Bay they shut down to prepare for the consequences. All have made the pertinent notifications through communication and on social networks. Disney stressed that they will analyze the safety of their staff and visitors before reopening, so it was not clear whether they would resume operations on Friday.

Due to closures, the big hotels in the parks remained open and issued warnings to tourists who spent the hurricane there. In social networks, some videos stood out that show what their stay was like for them, and what turned from magic to reality.

“They gave us the order that after 21:00 no one should be here in these places, because the storm is going to get worse (…) You can see the intensity of the wind from this hurricane approaching the city of Orlando”, emphasizes Jorge Adam, who fought against the air that took away his protective plastic to warn about what the area is like.

One of the most prominent questions is what would happen to the animals in Animal Kingdom. Far from evacuating them, past hurricanes have shown that the facilities are designed to anticipate these phenomena and keep them safe without greatly altering their habitats.

after the hurricane some shared what the panorama was like in Disney hotels and whether or not major damage was sustained. From what can be seen, the winds felled some trees and also caused flooding, but the structures resisted without being affected.

A TikTok user identified as @Clearwatertodisney described the evacuation before Ian’s passage. After having exhausting days, the woman assured that everything became “quite decent” after that. “They all moved from the Fort Wilderness cabin to the main hotel,” he began as he made a turn revealing one of the Disney characters hanging out with people. “Video games are free. There is a small crowd here. (…) I think we will be fine”he added.

In another video, they highlighted the various activities that the main hotels in Florida opened for tourists, in addition to those mentioned, there were special meals at lower prices and also discounts on table games.

Hurricane Ian reached southwest Florida on Wednesday as a category 4, with winds of more than 240 kilometers per hour and caused flooding that was classified as “catastrophic” in several places. It made landfall on Cayo Costa as an “extremely dangerous” cyclone and around 8:00 p.m., the National Hurricane Center reported that it had been downgraded to category 3. Before passing through Florida, it caused severe damage in Cuba, especially in the Pinar del Río province.