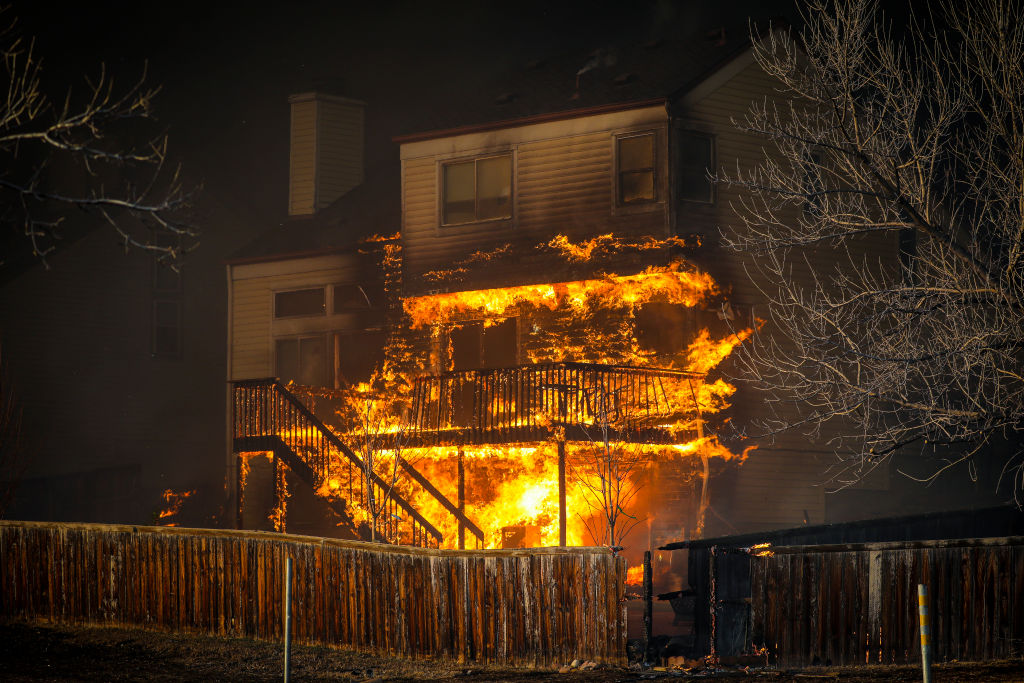 Hundreds of homes destroyed and thousands evacuated by fires in Colorado

2 Colorado cities evacuated due to wildfires 3:26

(CNN) — At least 500 homes have been lost after two wildfires grew rapidly in Colorado Thursday as high winds swept through the region, forcing tens of thousands of residents to flee their homes, the Boulder County Sheriff said.

About 35,000 people in Colorado have been evacuated in Superior, southwest Boulder County and Louisville due to the Marshall fire, Michelle Kelly of the Boulder Incident Management Team told CNN affiliate KUSA in an interview this morning.

“They are two entire communities directly affected by this fire, and it will take some time for them to recover,” Kelly said.

So far no deaths have been reported, according to authorities. “We could have our own New Years miracle on our hands if it is maintained that there was no loss of life,” said Gov. Jared Polis. One person has been found unaccounted for and others have been treated for injuries, authorities said.

The blaze, fueled by hurricane force winds, burned some 2,500 acres in Boulder County in a few hours Thursday.

“Historic” winds of 123-160 km / h have been recorded in the area, authorities said Thursday.

At least six people are being treated for injuries related to one of the fires, a UCHealth spokesperson told CNN. Kelli Christensen said there was no more information available about the patients, who are at UCHealth Broomfield Hospital.

There are about 2,000 houses in the burned area and officials “fully expect 500 or more to be lost,” Pelle said.

See also  KYK came to the fore with suspicious deaths in dormitories: Signs were removed

Damage assessments are currently in progress and final numbers are not expected before today or tomorrow, the sheriff said.

The cities, Louisville and Superior, are about four miles apart, not far from the city of Boulder.

“If you are in the area, act quickly,” the Boulder County Office of Emergency Management tweeted to Louisville residents.

The US Census Bureau says Louisville has about 21,000 residents and Superior has 13,000.

“The Boulder OEM is getting a lot of calls about residents who have seen a fire. IF YOU SEE A FIRE, EVACUATE. Go east, go north, but leave immediately. More information through OEM channels,” it read in a tweet from the Boulder Office of Emergency Management (OEM).

The National Weather Service called the situation “life threatening” in the Superior and Louisville areas.

Two houses burn after being consumed by a wildfire in the Centennial Heights neighborhood on December 30, 2021 in Louisville, Colorado. (Credit: Marc Piscotty / Getty Images)

“Fast life threatening situation in Superior and Louisville areas! There are fast-moving fires in the area. Gather more information and are prepared to evacuate immediately, ”the agency said on its NWS Boulder Twitter account.

One of the fires, called the Middle Fork Fire, is north of the city of Boulder, according to Boulder OEM, the other fire, the Marshall Fire, is south of the city.

People are being asked to avoid the area of ​​Highway 93 and CR 170 where there is a road closure, according to OEM.

Houses have exploded due to fire, authorities say

“It’s total devastation,” Folsom told CNN. “I was able to tour the area last night with the city manager and sheriff’s sergeant and we witnessed incredible devastation around the city, and then we also saw houses exploding before our eyes. It was one of the most unsettling situations I’ve ever encountered. “

People had minutes to evacuate due to the unprecedented winds, he said.

“This tragedy touches absolutely everyone in our community,” Stolzmann told Walker.

Stolzmann said that while the official cause of the wildfire has not yet been determined, one of the first assumptions was that it was caused by downed power lines.

“We are in the middle of a truly historic windstorm across the front, the hills and the urban corridor,” said the National Weather Service in Boulder, Colorado.

A West Metro firefighter observes the damage after a fast-moving wildfire ripped through the area in the Centennial Heights neighborhood of Louisville, Colorado, on December 30, 2021. (Credit: Marc Piscotty / Getty Images)

The “exceptional amplification of mountain waves”, which refers to a significant increase in wind speed as air flows over the mountains to lower elevations in and around Boulder, which can occur in very atmospheric conditions. specific, is attributed to hurricane-force wind gusts.

Combined with a relative humidity below 20%, extreme winds are fueling the rapid spread of the fire, even in the urban areas of Superior and Louisville.

Peak winds should be occurring by now and the NWS says the high-resolution modeling shows “a rapid retreat of the strongest winds to the foothills in the next 2 hours.” At dusk, the winds should decrease even more.