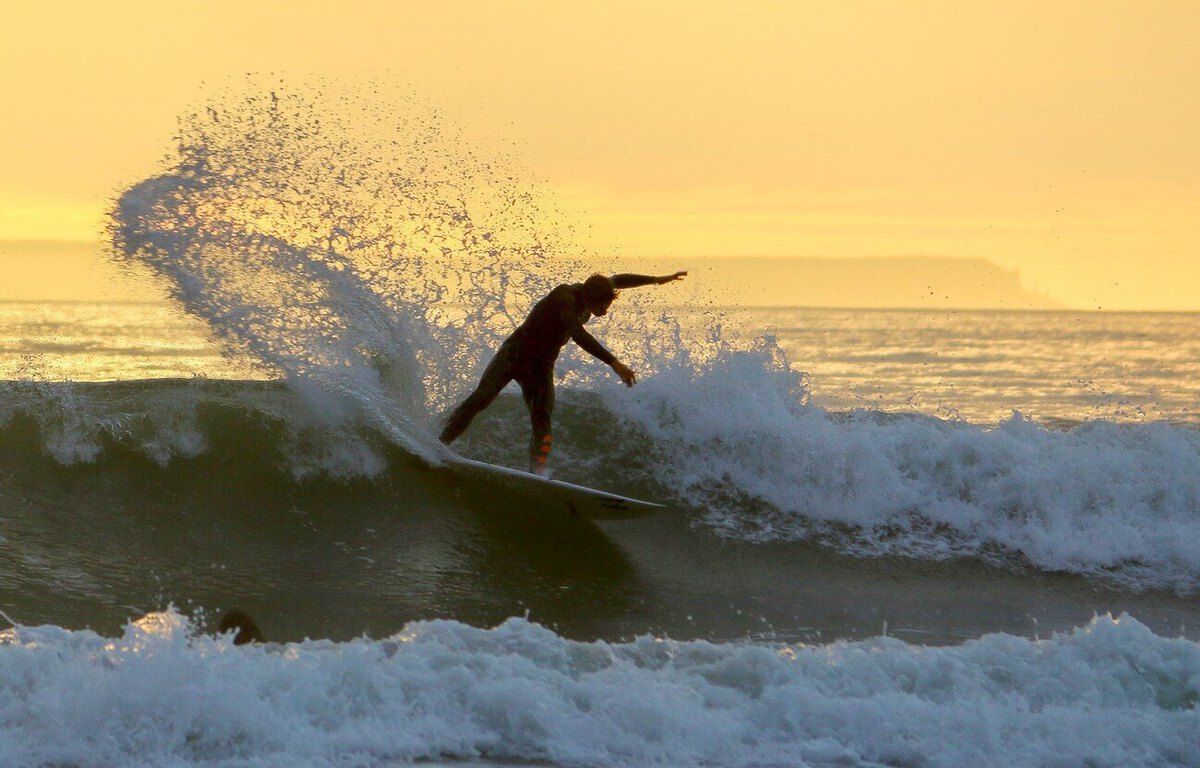 How waves form (and how surfers manage to tame them)

If you choose the sea (which dances along the clear gulfs) as your holiday destination, with its changing reflections, privileged witnesses to the whims of the sky, you will no doubt find yourself waiting for a wave to carry you away, before it does not come to run aground on the edge. We have all experienced it: nothing is more complicated than predicting how a wave will come to carry us away or how to get out of the water once in the impetuous waves.

At the moment of appreciating the extent of a wave, for a few seconds and in an improvised way, one becomes a physicist modeling a very complex phenomenon in order to predict its effects.

Origin and nature of waves

A wave is a deformation of the surface of a body of water most often caused by another fluid: the wind. At the interface, the wind creates waves on the oceans, seas and lakes.

Other phenomena, much less frequent, are also a source of waves: certain earthquakes, volcanic eruptions or meteorite falls creating waves called tsunamis or tidal waves. The tide is also at the origin of very particular waves, called tidal bores, sudden elevations of the water of a river or an estuary, caused by the wave of the rising tide in the mouth and the lower course. of certain rivers during high tides. Finally, ships are also sources of waves.

Waves are waves, that is to say phenomena that move periodically in time (we talk about period) and in space (we talk about wavelength). They can spread for miles before making landfall, and gain strength depending on the slope of the ocean floor. To understand this phenomenon, it is necessary to seek a physical model of the wave.

See also  MWC 2022: a robot dog is the sensation, all its functions make it feel like a real animal

A brief history of waves

Astronomer and mathematician George Biddell Airy provided the simplest theory for regular (periodic) waves. The Airy wave has a free surface, the surface of the water, of sinusoidal shape. This is a very simplified vision of reality, valid for waves of low “camber”, that is to say the ratio of height to wavelength.

If we look carefully at the waves at sea, we see that most of them are not sinusoidal: the crests are more pointed, the hollows more flattened.

But what is interesting for us today in Airy’s theory is that fluid particles describe almost closed ellipses, whose size decreases with depth. We always think wrongly that a wave carries us: in reality, if we swim in depth during the propagation of a wave, we realize that there is a back and forth movement, not necessarily intuitive from the point of view of everyday experience but well highlighted by Airy’s theory.

In deep water, that is to say for depths greater than half the wavelength, these ellipses are circles. The fact that the ellipses are not quite closed is a manifestation of “Stokes drift”. Near the free surface, the speed of a water particle is greater under a crest than the opposite speed when passing the next trough. This results in a drift in the direction of propagation of the waves which can be reversed at depth.

Let’s get back to what will concern us this summer: facing the waves… with dignity! In fact, “owning a wave” means understanding its surge.

Indeed, some waves are too steep to be stable: they break.

Approaching a shore, the depth decreases, the shape of the waves changes, first in a roughly symmetrical way then in general with an increasingly steep front face as soon as the height of the wave is same order as the depth. When the wave breaks, most of its energy is dissipated in eddies and air bubbles. The associated impulse contributes to accelerating the current in the direction of the breaking.

The shape of a wave in the vicinity of the shore depends essentially on the slope of the bottom. Going in the direction of increasing slopes, we most often distinguish three types of breaking. Progressive or slippery breaking generally occurs on beaches with very low slopes. The waves begin to break away from the shore with a frothy looking crest that steepens as it progresses leaving behind a layer of foam.

The plunging wave is particularly spectacular with its rolls appreciated by surfers. The wave wraps around an air pocket and then collapses creating a noticeable splash. This tends to happen most often on a steep slope or a sudden change in depth (a pitfall), and that’s why there are “spots” popular with surfers.

​Drawing energy from the waves

There is much more dissipated energy than reflected energy on the beach. The energy dissipated on the surface of the collapsing wave is beneficial to the surfer who can use it as a source of kinetic energy: the wave provides him with the necessary dynamics to move, and perform the figures he wishes on his board in motion thanks to the wave.

Frontal or swelling surf forms like plunging surf but the wave moves up the beach before the crest can roll up. The breaking zone is very narrow and a large part of the energy is reflected towards the greater depths. When the crest goes faster than the wave itself, a thick layer of crest foam forms at the top. We then speak of a slippery wave, typical of a gently sloping shore. This type of breaking completely disadvantages the surfer since the energy is given to the depths. The surfer’s talent as a “casual physicist” is to be able to recognize the types of surf for this purpose.

There is also an intermediate case between plunging and frontal breaking. Instead of forming a roll, the wave presents a vertical face before collapsing.

Surfers are often nicknamed the “tamers” of waves. The good wave conditions allow a good practice of surfing (with a lot of technique anyway!). This means good wind or swell conditions, which can vary by location.

Hollow waves, with a plunging break, are the favorite of “shortboarders”, who use short boards. Hollow waves are the most powerful waves, but not necessarily the biggest. Indeed, some waves that can be described as hollow are much more powerful than a soft wave of the same size. The principle of the shortboard (short board) is to allow a more “dynamic” surfing practice with multiple changes of direction on the wave to achieve different figures. This is made possible with a wave whose breaking is better controlled.

Finally, a surfer primarily does applied research in the “good waves” discipline.
In general, whether you play with them, contemplate them or face them, take advantage of these moments of freedom offered by Nature. And let’s remember that there is only one planet Earth to spend beautiful summers!

This analysis was written by Waleed Mouhali, teacher-researcher in Physics at ECE Paris.
The original article was published on the site of The Conversation.