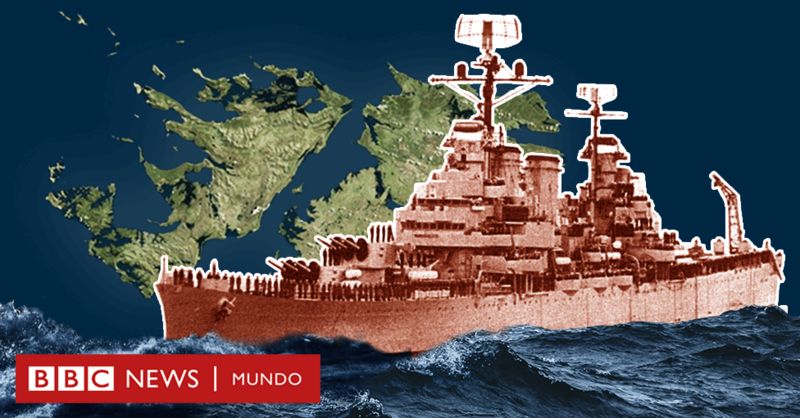 How was the sinking of the Belgrano, the deadly attack on the Argentine ship that changed the course of the Malvinas/Falklands war

Alberto Deluchi was aboard the Argentine cruiser ARA General Belgrano when the ship was attacked by the British submarine Conqueror.

And he says he survived thanks to chance.

A few moments before the first torpedo hit the ship, he had left the mess hall, which had been destroyed, killing dozens of men.

“If I stayed talking for half a minute more, I probably wouldn’t be here,” Deluchi tells BBC Mundo.

It was 4:00 p.m. on May 2, 1982. Just one month had passed since the Argentine military landed on the Malvinas or Falklands Islands to claim their sovereignty, an action that triggered a bloody war with the United Kingdom.

323 Argentines died in the attack on Belgrano, almost half of the 649 casualties that the South American country suffered in the war, in which 255 British soldiers and three islanders also lost their lives.

It was a key moment in the conflict. And also one of the most controversial.

40 years later, BBC Mundo tells you how the decisive assault was, what its consequences were and the human drama it unleashed.

A ship with history:
The ARA General Belgrano

The last mission of ARA General Belgrano It sailed from the Puerto Belgrano naval base to Isla de los Estados in the South Atlantic on April 16, 1982. It had 1,093 crew members on board, including officers, subordinate personnel and young people who were completing compulsory military service.

Built by the US in 1938, it had been sold to the Argentine Navy in 1951, after surviving the attack on Pearl Harbor where it participated under the name of USS Phoenix.

It was a ship with high firepower. She had five turrets of three 152mm / 47 caliber guns each, eight 127mm guns on her flanks and anti-aircraft artillery.

But it lacked a sonar to detect underwater objects.

Its protection was in charge of two destroyers, the ARA Piedrabuena and the ARA Bouchard, which did have this technology.

El HMS Conqueror It was a nuclear submarine of the British Royal Navy that departed from the Faslane naval base in Scotland, heading for the South Atlantic on April 3, 1982, the day after the Argentine landing on the Malvinas or Falklands Islands.

It had entered service in 1971 and its propulsion through a nuclear reactor allowed it to make trips in the ocean depths longer than conventional submarines.

But it did not have nuclear weapons, but six tubes to launch torpedoes of two types: Mark 8 and Mark 24, also known as “Tigerfish”.

On April 12, 1982, ten days after the start of the war, the United Kingdom drew a 200-nautical-mile maritime exclusion zone around the islands. And at the end of that month it turned it into a total exclusion zone, indicating that it could open fire on any hostile ship or plane that crossed the drawn limit.

There is consensus that the Belgrano was attacked outside that area.

However, the United Kingdom has indicated that on April 23 it had warned Argentina that it would respond to any ship that appeared to be a threat to British forces in the South Atlantic (which would not include specific limits).

The following maps recreate what happened from the moment the Belgrano was intercepted by the British submarine, based on the testimonies of former crew members of each of the ships. The Belgrano is identified with the color yellow and the conqueror with the color green.

He was the second commander of the Belgrano and at that time he was 44 years old. He was born on the same day the cruise ship was launched.

He was the navigating officer of the Conqueror and was 26 years old at the time.