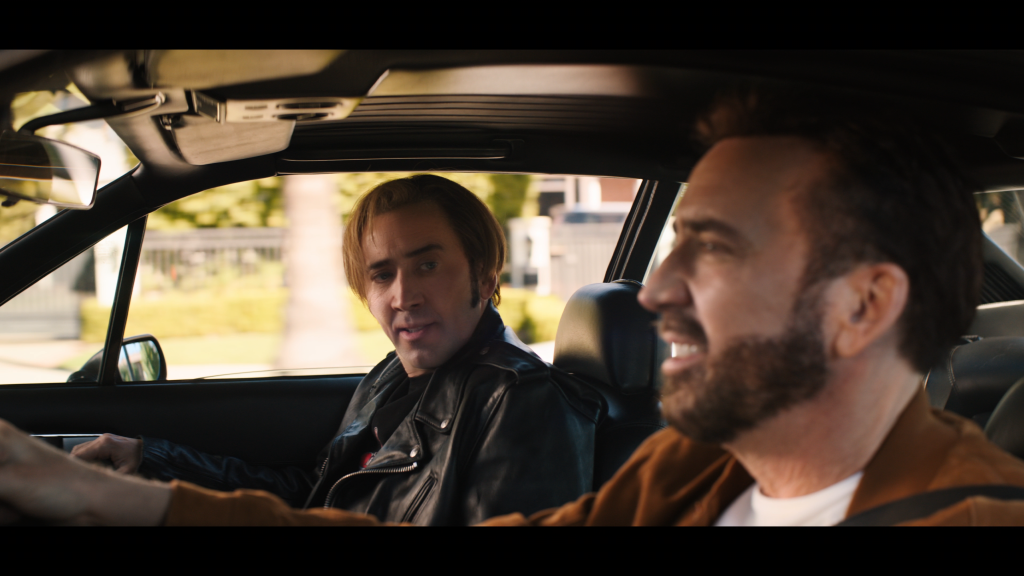 The VFX team on “The Unbearable Weight of Massive Talent” is no stranger to the intensive process of de-aging a known figure such as Nicolas Cage. For the film, the team was tasked to make Cage, who is 58 years old, appear about 20-25 years younger for the character of Nicky Cage. Nicky, Cage’s imagined younger self in the film, aims to keep the character of Nick Cage (with a K) on the road of being an uber-popular celebrity. The film’s visual effects team, headed by VFX supervisor Christopher Lance for the scenes shot in America, teamed up with CoSA VFX to bring Nicky to the big screen.

“Tom [Gormican] and Nic came up with the idea of Nicky from a specific persona that Nic created for an interview that he did on the Wogan show,” Lance told Variety. “But we were actually going for the look of his face, maybe like five years or so after that. Because I think that was the most iconic string of roles for Nick, like from 1995 or so through 2000.”

The interview showcases Cage at his wildest; the star cartwheels onto the stage, showers the crowd with money, does karate kicks and eventually takes off his shirt. Nicky aims to capture this crazed nature of Cage, allowing the actor to dial up his performance to 11.

“Everything that you’re seeing is Nic Cage acting,” Lance said. “And we were respecting all the artistic expressiveness that he brought to the role. Really, all we were doing was the de-aging. There were no dots, no special lighting or anything like that. It was just Nic Cage performing. And no matter what the lighting condition was, we could just take that and run with it.”

In order to create the effect, Lance’s team and CoSA VFX’s head of digital makeup Erik Bruhweiler used artificial intelligence to create a “template” of the actor’s face when he was younger based on footage from around that time.

“What we’ve done is set up a templating system that allows us to solve it once and then modify the details as needed. So you don’t have to rethink it every time,” Bruhweiler said. He added: “The biggest challenge of de-aging someone like this is that you’re targeting what they actually looked like when they were younger. This had to be an accurate de-age of the actual person, Nicolas Cage, because everyone knows his face.”

As expected, this process is extremely detailed even with the help of A.I. It takes hours of poring over every single detail of the actor’s face, changing any little discrepancy that may cause the viewer to notice the CGI.

“It’s like cracking a safe,” Bruhweiler said. “You’re sitting there listening and trying to get that little subtle detail that finally clicks it together.”

And, of course, there’s the kiss. The kiss between Nicky and Nick required a double playing Nicky, but presented its own problems.

“Well, it was shot during COVID,” Lance explained. “So they had to get them close to one another without actually touching. We had to lock them together to make it look like their lips were actually locked.”

He added: “That kiss was just improvised on set. That was Nic Cage’s idea. So we didn’t know that was going to happen until we actually got the footage back in post. And then we were like, ‘Okay, let’s tackle this new shot!’”