This week, a graph circulated on social networks that showed Argentina first in the ranking of countries that more years of recession had passed in the last 60. The sad record was reached with 24 years where the GDP fell, including 2019 and 2020. Back came the Congo, Zambia, Haiti, Chad, Burundi and Guyana. The data does not surprise, Argentina is a tragedy in terms of low growth with a particularly pronounced cycle. Exactly the opposite of the intended economic policy objectives of maximizing the trend and minimizing the cycle.

Lack of a currency through which to channel savings into investment is the snake egg behind this process. It generates that in a systematic way local savings will finance the rest of the world reducing investment, and limiting the productive leap in a world that is certainly not static.

Only in the last fifteen years, the formation of external assets totaled US $ 150 billion, almost a third of the current GDP and five times the size of credit in the financial system. And this happened during the two governments of Cristina Kirchner and that of Mauricio Macri. When the stocks are imposed (between 2012 and 2015, and again since October 2019) the formation of external assets is adapted to the established limits. At the same time, the fall in the BCRA’s reserves is accelerated due to the net cancellation of debts of the public and private sectors (nobody enters a dollar into the country). 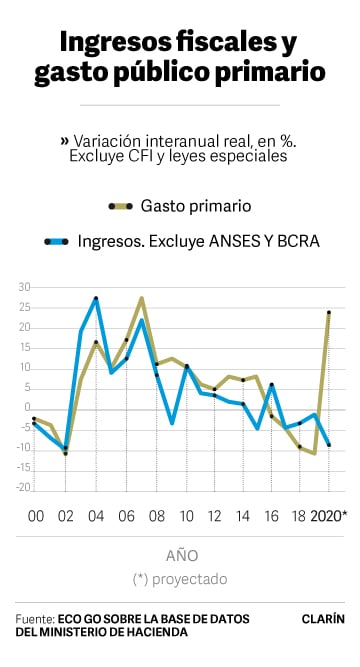 But also the exchange gap is triggered generating mixed incentives. During the previous stocks, these incentives were “administered” through a trade regime that delivered scarce dollars based on a set of priorities, sometimes esoteric, such as seeking trade balance by company (1 to 1, dollar exported by imported dollar). In the current stocks, priorities are defined based on the financial management of companies; Read: Those companies that in the last 90 days have bought dollars in the Liquidation Account and / or those companies that have dollars in their balances deposited abroad cannot buy official dollars to import and / or cancel debts.

With this criterion, the BCRA kills two birds with one stone. On the one hand, it slows down the demand for official dollars. On the other hand, it reduces the demand for cash with liquidation. But in the same shot, importation, investment becomes more expensive and credit rating is complicated of the private and the provinces.

The margin for build a currency without having to abuse the currency anchor We had it during the 2000s and it was wasted. The economy was starting from twin surpluses of around 4% of GDP, convertibility had broken inflationary inertia, debt had been restructured and the financial system was healthy after the breakout at the exit of convertibility. The exit from the recession also coincided with an unprecedented weak dollar shock and high commodity prices that greatly extended the cycle.

Not only did the country maintain very negative interest rates (half of inflation up to 2012, supported by a dollar that remained almost stable), but also squandered the twin surpluses in transition. Between 2005 and 2008, the country consumed everything and a little more from the extraordinary increase in resources as if the jump associated with Chinese rates and extraordinary commodity prices were to last forever.

In 2009, with the global recession, the increase in expenses rose 13% above inflation with resources that fell almost 4% in real terms. That year, the fiscal slump recreated to offset the crisis was financed with the IMF’s Special Drawing Rights (Deg’s) issue. In 2010, the resource and expense curves were aligned, but spending grew systematically above resources between 2011 and 2015, and without access to credit the deficit was financed with the BCRA. The main difference was the stock of starting Reserves.

The deficit was not born out of cabbage, always pursuing expansive fiscal policy – in recession and also with growth – ended up validating that the fiscal result goes from + 4% of GDP in 2004 to -4% in 2015 in a context where public spending rose from 25% of GDP to 41%. It is worth remembering that Kirchnerism not only raised the level of spending, but also indexed more than half of the past.

During the Mauricio Macri government spending fell to 36% of GDP, but so did the tax pressure. The drop in spending accelerated between 2018 and 2019 with the liquefaction that produced the jump in inflation. Just when the financing scheme adopted to limit fiscal dominance collided in the framework of an extremely voluntarist and inconsistent monetary scheme given the starting distortions, the year 2019 closed with a fiscal deficit of just 0.5% of GDP, but with a inertia that, if the status quo had been maintained, would have returned it nonstop to something more like 3% of GDP.

Memories of the present

It was the current president, the same one who now maintains that he does not like economic plans, who sent a bill to Congress last December that ensured fiscal consolidation. Among its measures included the deindexation of pensions for 180 days, the elimination of the tax reform and the increase in withholdings on exports.

After that adjustment, the debt negotiation and the agreement with the IMF were supposed to come. The delay on both fronts and the Pandemic disrupted short-term goals and the deficit would jump to 7/8% of GDP in 2020, with expenses rising in real terms almost 40 percentage points above the collapsing resources. Without access to credit, monetary financing increased liabilities (monetary base + remuneration) from 11.5% last October to 18.4% today and would take them to 24% in December. Transitory price controls, the increase in the demand for pesos, the brake on the distributive bid and the balance of prepo in the foreign exchange market keep inflation contained, but inflationary escalation risks are latent.

The short-term scenario depends on the evolution of the COVID-19 and the capacity of the policy to manage in the meantime the trade off between economy and health, but three variables that will define not only the end of a year to forget but if the country is heading to a stabilization path or a path towards stagflation at serious risk of aborting the rebound in 2021 compared to the very low levels of activity in 2020.

If the debt is arranged and maturities with the IMF are postponed, the margin for put together a stabilization program that underpins the logical rebound of the post-pandemic economy reappears. Relative prices are significantly more aligned, the external accounts became in surplus after three years of abrupt recession and the distributive bid that had escalated with the devaluation in installments of the last two years of the Macri government, is currently kept retired to barracks of winter in the middle of the pandemic.

The ability to consolidate fiscal accounts in the post pandemic needs that expenses grow below resources in 2021. This crossing of curves requires that all the bulk of the expenditure originated in the compensatory measures during the Covid-19 disappear in 2021, that the rates unfreeze and limit the increase in subsidies, that the prudence of this year be maintained in the pension adjustment. and it extends to the parity ones. Fundamentally that do not try to refloat the activity through taxation in the electoral year and this includes public works.

Complicated agenda for an electoral year. Necessary condition to stabilize and begin to lay the foundations for build a coin that at some point allows us to move away from the ranking with which the not