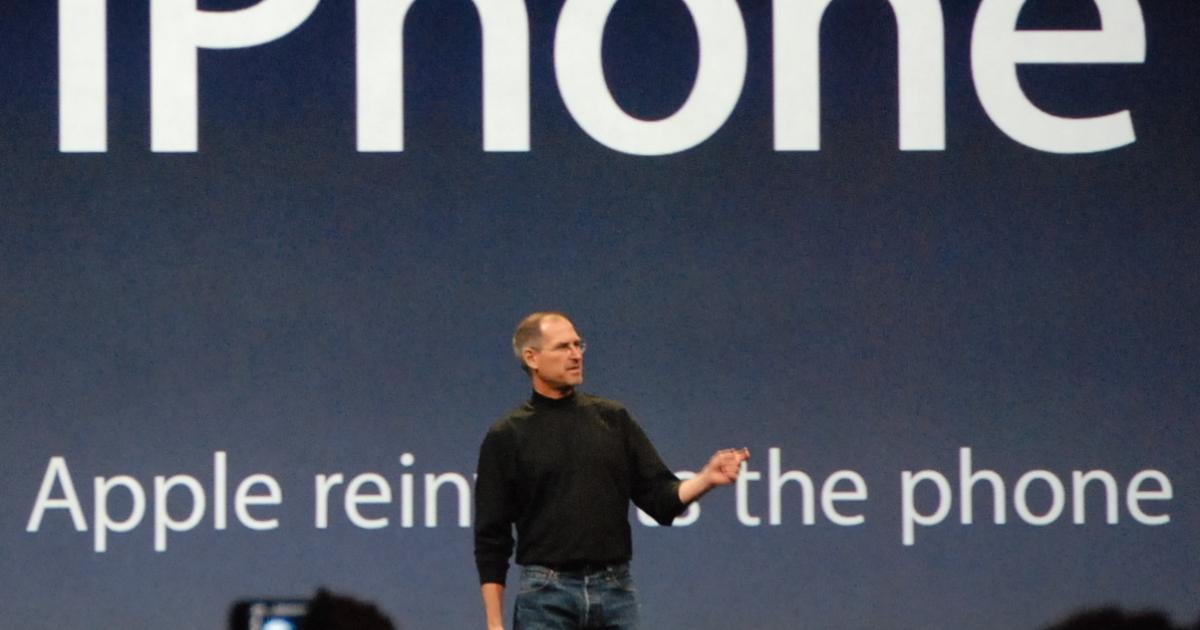 How the smartphone changed everything

Steve Jobs announced Apple’s first smartphone in 2007. It was the beginning of a success story that continues to this day.

Am January 9, 2007 on the Macworld– The San Francisco Fair announces Apple-Founder started a smartphone that was supposed to be a phone, an iPod and a computer all at the same time. “And we are calling it iPhone” – “And we call it iPhone,” said Jobs at the time, accompanied by thunderous applause from those present. The iPhone was born.

The first Apple smartphone was just 15 years ago 11,4 cm x 6,1 cm large, had a storage space of 4 GB and tasted 499 US-Dollar. A proud price by the standards of the time. For comparison: that Blackberry Pearl, a smartphone that was particularly popular at the time, cost 350 US-Dollar and was considered a status symbol.

Despite the price, sales skyrocketed in the years that followed. The age of the smartphone was heralded. We show how the iPhone turned the tech world upside down.

The smartphone market was in the year 2007 still tiny. Blackberry and Motorola When Jobs announced the iPhone, they already had one or two smartphones on the market. At that time, however, it was common to use the hardware keyboard and / or stylus. With the iPhone, Apple brought out a smartphone that laid the foundation for finger operation. It could be typed with several fingers at the same time, making the hardware keyboard superfluous.

The competition smiled at Apple’s ambitions. That was the joke of the former Microsoft-CEO Steve Ballmer in an interview not only about the high price of the iPhone, but also criticized its touch function: “It doesn’t appeal to business customers because it doesn’t have a keyboard. That doesn’t make it a good email device. “

Google however, quickly recognized the potential of the touchscreen. The tech giant presented its operating system Android, which at the time was tailored to devices with hardware keyboards, quickly changed to finger operation. The triumphant advance of the touchscreen could no longer be stopped.

The first iPhone had one 2 mega-pixel camera. Although the iPhone camera initially promised a much lower resolution than digital cameras, smartphone photography quickly overtook conventional photography. Sales of cameras, especially point-and-shoot models, have declined dramatically since 2011. At the same time, the number of pictures taken by people is increasing every year.

The connection between the camera and the Internet, which was dominated by the first iPhone, made a significant contribution to the triumph of mobile phone photography. Admittedly, the 2 megapixel camera could hardly meet the demands of professional photographers. But the fact that pictures could be taken and shared on social networks almost at the same time helped the smartphone photo achieve its breakthrough.

The iPhone also revolutionized photography with its ease of use. After the success of the first iPhone generation, Apple began adding new features to its camera app: Images could be edited directly in the app – with filters or corrections. You no longer had to be a photographer to take decent photos – the smartphone did the work. This thought has persisted in Apple’s camera development to this day. Today, AI conjures up the optimal image for users.

The App Store came with the iPhone

Believe it or not, with the first iPhone, users couldn’t download third-party apps. Only applications that Apple had preinstalled were available. Only in July 2008One year after the rollout of the iPhone, the then unique App Store followed. At the beginning it housed about 500 Apps. According to Statista, there are over in the App Store today 2.2 million Applications available. Apple is currently only surpassed by the Google Play Store. This even offers a third more apps.

With apps, our phones have largely replaced maps, flashlights, cameras, clocks, scanners, calendars, calculators and MP3 players. You have also created a whole new market in tech. The revenue generated from app purchases was, according to App Annie $ 97 billion. 65 percent of which are accounted for by the App Store.

$ 3 trillion business thanks to iPhone

Apple not only turned the cell phone market upside down with the iPhone, but also catapulted itself to the top of the entire tech industry with its first broad-based smartphone. Apple’s annual sales have increased more than tenfold. According to Statista, last year was around 240 million iPhones sold. They are responsible for the lion’s share of Apple’s sales revenue, which makes the company like competitors Nokia or Blackberry could overtake quickly.

With the iPhone hype, Apple wasn’t just able to leave tech companies behind. In 2007, Apple’s market capitalization was (the total value of all shares in a company, by which company value is usually measured) $ 174 billion (154 billion euros). On January 3, 2022, Apple finally was $ 3 trillion (2.6 trillion euros) worth. It is now the most valuable company in the world.