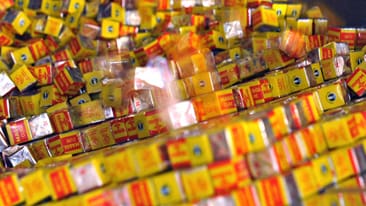 They are usually on the spice shelf, somewhere between salt and nutmeg: small, ocher-yellow cubes, wrapped in gold-colored aluminum foil. One cube alone makes five deciliters of broth. Efficient. But efficiency comes at a price, but more on that later.

It all started with a medical challenge. “For centuries, the British and French navies have been looking for a product to combat scurvy, a disease caused by malnutrition. Research has been done to develop infusions that resemble vegetable soup. The pharmacies on board the ships equipped themselves with it to feed the sick,” says Pierre-Antoine Dessaux, lecturer in history and culture of nutrition at the French University of Tours.

It was not until the beginning of the 20th century, in 1908, that the Swiss entrepreneur Julius Maggi began to market the cube as we know it today on a large scale. The preparation evolved into an industrially manufactured kitchen aid sold under the brand name Maggi (part of the Nestlé Group since 1947).

The product, which consists of salt, flavor enhancers such as glutamate, oil and aromas, is a real triumph in the 20th century and is being bought by more and more households. Large advertising campaigns help to make the logo with the yellow letters on a red background iconic.

But the product has its dark side. “Back then, the families thought that these soups were nutritious. In reality, they only taste salty and are very poor from a nutritional point of view,” says Pierre-Antoine Dessaux. On the African continent in particular, it is also crowding out local culinary traditions. For a long time, “sumbala” dominated in West Africa, made from seeds that are crushed and then fermented. “It is used to improve the flavor of sauces served with cereals,” explains Monique Chastanet, historian and nutritionist at the Institut des mondes africains (IMAF) in Paris.

This seasoning not only enhances the flavor but is also very rich nutritionally. This is not the case with the industrial Maggi Cube, as the concentration of monosodium glutamate far exceeds the recommended amount. “We are facing a public health risk today. Excessive salt consumption is a real problem for our population, which is increasingly suffering from cardiovascular diseases,” says Cameroonian chef Christian Abégan.

Abégan wrote a book about the colonization of taste. In many traditional dishes such as Thiéboudienne and Poulet Yassa, the industrially produced golden square has prevailed in the list of ingredients. «Because of him, we are gradually losing the handwriting of some recipes from our homeland. The bouillon cube is becoming a habit for chefs who no longer take the time to brown onions with spices to make sauce stock,” says Christian Abégan.

On the way to new cubes?

While the bouillon cube is a staple in African cuisine for many, it is losing ground in Europe. The sales figures are going down. Factories are relocated to Eastern Europe.

In Africa, the opposite is true: Once imported, the dice are now made in a dozen factories across the continent, where an estimated 100 million are sold every day. But there is also a counter-movement. Young chefs from Africa and the diaspora are questioning its use and trying to create “new cubes” that are healthier and more local. To reappropriate the national culinary stories.