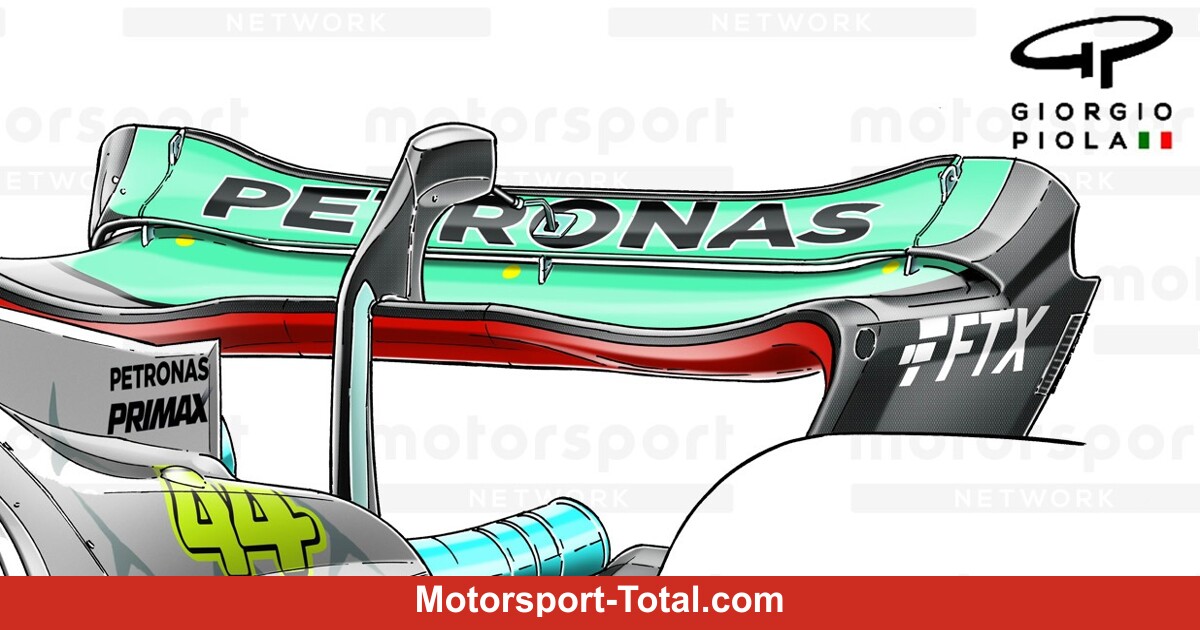 How Mercedes is experimenting with the W13

(Motorsport-Total.com) – The Mercedes W13 jumps dramatically on the straights. That’s why the team continues to rely only on small updates to the vehicle. True to the motto: First of all, the basis must be right before further development can be pushed. And that in turn is one reason why Mercedes experimented a lot at Imola on the fourth race weekend of the 2022 Formula 1 season.

Lewis Hamilton and George Russell used different rear wing versions in free practice on Friday. In a direct comparison, the Silver Arrow drivers should work out the better set-up variant.

Russell ran the standard high downforce version with a large and steeply raked airfoil. Hamilton received a different version with a clearly visible incision at the top edge of the profile, including a Gurney edge as a finish. A variant for less downforce.

Mercedes eventually opted for the rear wing that Russell had tried, i.e. for the extra downforce on the rear axle. Hamilton’s vehicle was therefore modified for qualifying.

Technically, there were only “small differences” between the two Mercedes cars, says Andrew Shovlin, chief engineer at the racetrack. “However, the vehicles behave differently as a result. With Lewis we had a little less contact pressure than with George. But we’re only talking about a few km/h on the straights.”

More updates on the Mercedes W13

The other Mercedes updates at Imola were not necessarily about sheer performance, but better efficiency. The team tried to improve the vehicle’s aerodynamics and cooling with small new technical parts.

In front of the side boxes of the W13, Mercedes has reshaped the lateral crash structure, in combination with a rear-view mirror bracket that has also been modified. What is new is above all that the structure is much thinner at the front edge. 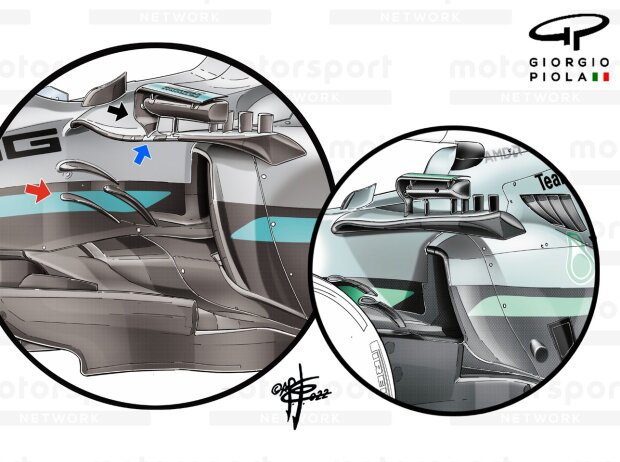 The foremost strut of the rearview mirror mount now sits right on the edge (blue arrow) and now has a metal insert that is supposed to provide more stability. The side end plate of the mount (black arrow) has also been adjusted and slightly enlarged.

Since the Imola, there has been another air baffle on the side next to the cockpit (red arrow), the third at this point, which is intended to direct the air flow even more precisely into the opening in the side box and thus optimize the cooling effect. The two previous air baffles were therefore slightly raised. 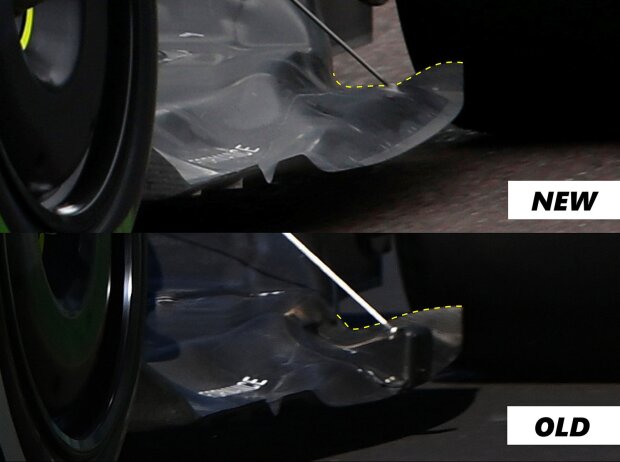 Mercedes has also modified the underbody: the underbody has been given a new shape on the trailing edge in front of the rear wheels. Appropriately, the team has also changed air deflectors on the rear axle.

The main question here is how the air turbulence that occurs on the rear wheels can be minimized so that the other aerodynamic surfaces at the rear of the vehicle function optimally.