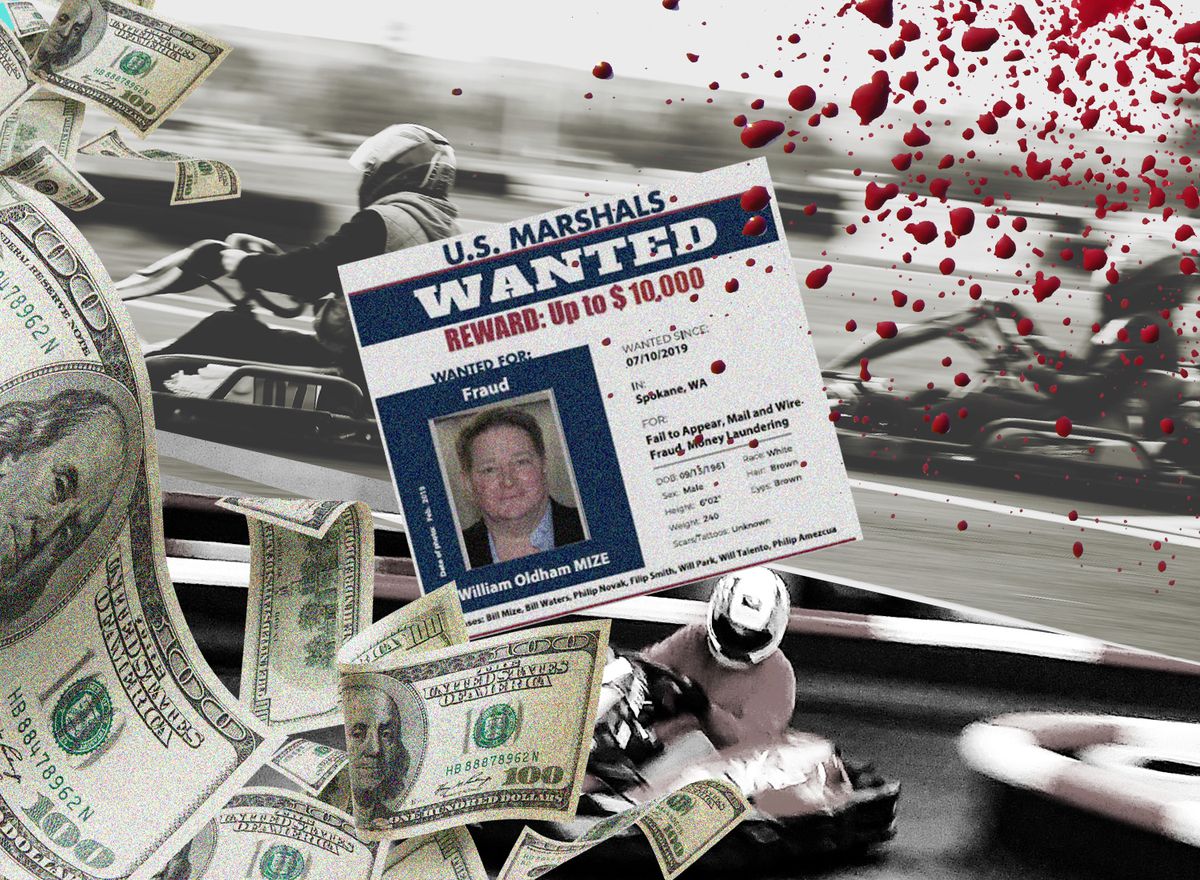 How many bones would you break for six million dollars? The American family injured in defrauding their insurance | icon

If anything characterizes American popular culture, it’s its scammers. From Charles Ponzi to Anna Sorokin, American history (and its platforms of current, always ready to retell the same story with an improved aesthetic) is full of tricksters. However, not all of them go as far as William Mize IV – the protagonist of a report published this month in the magazine New York signed by Lauren Smiley—, head of a scheme with which he and his family defrauded insurance companies out of millions.

Between 2006 and 2017, Mize orchestrated more than thirty fake car accidents with his wife, children, cousin and a small family of relatives, swapping the roles of victim and culprit to later strike a deal with the insurance companies. Mize did not fake the injuries of the victims by spreading a stream of red paint on the bodywork, but cut his associates with a blade or a cutter and spattered the vehicle with blood so that the pantomime would be believable. He even had them empty a bottle of their own urine to make it look like they passed out. In return, they pocketed six million dollars.

Mize, according to Smiley’s research, was an “injury artist.” Also known as William Talento, Chad Harris or Phillip Gonzalez, he always thought that acting within the bounds of the law was for the poor in spirit. Born in El Paso, Texas, in 1961, Mize grew up on the outskirts of San Francisco with his single mother, Eve, until, in a fit of adolescent rebellion, he left the family home and began working as a waiter, as the New York publication. Traveling in Idaho, famous for its 19th-century gold mines and fortune hunters, he met Teresa Mastin, a 15-year-old teenager who became his first wife shortly after she became pregnant.

See also  who is Ketanji Brown Jackson, the first black woman appointed to the Supreme Court?

The family grew with the arrival of William Mize II. His biological father, absent until then, burst into his life. And far from harboring a grudge against him, Mize also named his son Will in his honor (that would be William Mize V; for some reason our protagonist wanted to be named William Mize IV, a generation skipped). In a possible burst of California nostalgia, the family headed to Sacramento, the state capital, where their daughter Angela was born in 1984. “Those who came to California were not contented, happy, and contented people, but adventurous, restless, and daring people,” he wrote. Joan Didion, a native of the California capital, in where i come from. “They didn’t come west looking for homes and safety, but adventure and money.”

most highly honored didionesqueFortune soon granted the money to Mize. It was in the form of his father’s inheritance when he died in the late 1980s: $700,000 and a house in Arizona. With a wife, house and two children, Mize could have dedicated himself to embodying the ideal of the American suburban family, but he was not about to conform to any standard. He already had money, he just wanted more. His character became authoritarian and his personal style became increasingly ornate, perhaps inspired by the rise of one of his biggest idols of the time: Donald Trump.

This erratic behavior eventually ended his marriage and in 1993 Mize left everything to move with his two children to Acapulco, where he started his first business outside the law: marijuana trafficking to the United States. It was during this period that he met Sandra Sandy Talent, his future partner and indispensable piece in the family fraud business. After spending several months in a prison in Guadalajara, Mexico, after being arrested at his airport with drugs on him, Mize returned to the United States and lived in a stately home in a suburb of Spokane, Washington. established To give it a facade of baroque glamour, Mize spared no expense, strewing water jets in the garden and placing a chandelier on top of a rug in the garage near his Bentley.

the swindler was born

In 2006, Mize began his career as a professional insurance fraudster. According to the OECD, the United States is the first country of its organization in health spending, and the high medical costs that a car accident entails (up to 250,000 dollars) open the door for people who, like Mize, try to take advantage of ‘ a system in crisis.

How exactly did it work? The alleged victims would claim at the hospital to be covered by insurance but not have their policies on hand. Later, already recovered, they returned to ask for an invoice for their treatments and pay it in cash, which meant a discount. Mize then, under a false name, acted as the alleged victims’ insurance representative for those allegedly responsible for the accident (all, in fact, part of his clan) and agreed to a supposedly lucrative insurance settlement that would indemnify them from a claim would save All this is accompanied by falsified invoices to collect treatments and other claims such as loss of income or damage to property. The result? A shower of hundreds of thousands of dollars.

One of the first to join the business was Ryan Park, Mize’s nephew. To lure him in, his uncle offered to pay the entire mortgage on the house he shared with his girlfriend Kimberly Boito in exchange for his contribution to the scam. Coming from someone who considered Ryan a father, it seemed like a seamless plan.

“I never thought that [Mize] I would fuck with someone I love,” the boy told the magazine. New York. Things soon changed. Mize was increasingly in control of his life. “If the phone rings and I don’t answer, I would have problems,” he complains in the American publication. In 2015, Mize had a piece of his tooth pulled out with pliers and spat it out in front of paramedics who treated him after a staged accident. This was the final requirement for Mize to remove his name from the bond and release him from his bonds.

The plan failed: the insurance company was not going to pay them, the patriarch said. One of the many lies he told to whom he affectionately called “Uncle Bill” as a child. Mize’s influence was omnipresent. Angela, her daughter, tried to create a life outside the family business, but the uncertainty of her job in a Las Vegas casino made her feel like a failure. After a suicide attempt, Mize helped him financially on the condition that he participate in his fraud. Dressed in yoga pants, Angela began her criminal career in 2014, pretending to be the driver of a mid-sized Chrysler Sebring convertible that her father packed into a luxury Mercedes E500. “This is the family I was born into,” complains the young woman in the report. “This is my destiny”. Angela received $100,000 in compensation. The entire Mize clan was eventually connected to the business.

Once again, fortune seemed to smile on the Mize clan. In 2015, Angela met the man she would eventually marry. Ryan and Kimmy celebrated their wedding in 2016. The family business gained new members and ran smoothly. Mize was dedicated to handing out cuts, bumps and bruises to make accidents more believable and attract payments from insurance companies. How much more gore, the bloodier, the more shocking the condition of the car, the better. “That was the most important thing to him,” Ryan told the magazine. New York. “Blood, blood, blood.”

A helicopter ride to the airport or surgery was a windfall that could earn them nearly $30,000. One of his most memorable crashes included a cameo appearance by a local celebrity: Ron Wells, an architect and real estate developer from Spokane. The millionaire, North Carolina native met Mize in 2015 and they soon connected thanks to their mutual interest in luxury cars. Little did Wells know, he would soon crash his massive Dodge Ram 3500 pickup into the back of a speedboat owned by Mize. The reason? A $20,000 loan payment he couldn’t afford due to an expensive divorce.

“Am I going to do?” Wells told Lauren Smiley. “It was an easy fix.” Mize would be so pleased with the mass of grayish iron resulting from that accident that he would define it as his Mona Lisa.

In May 2018, a search warrant arrived from the FBI. A few months later, a federal jury indicted Mize and his 22 accomplices on charges including money laundering and health care fraud conspiracy. As published The Spokesman Review, the local Spokane newspaper, “Mize is allegedly at fault in car crashes, falls and other accidents in several states.” The millionaire empire of the Mize clan went bankrupt in 2019, with all its members sentenced. Sandi was the worst stop. The judge imposed a prison sentence of 70 months and three years of judicial supervision, in addition to a fine of more than 2 million dollars. After 12 years building a business for which Ryan said she was the financial director, the “brunette beauty of Orange County” finally pleaded guilty to 26 charges.

“Scams like this cause America’s hard-working taxpayers to pay higher insurance premiums,” said Special Agent Justin Campbell. As a good faker, Mize had one last ace up his sleeve. Surrounded by justice, he followed one of the greatest American literary traditions: running away to live an anonymous life across the country. “Please understand that all my options are very bad,” he wrote to his daughter Angela from San Diego. “I don’t want to die in prison.”

Far from becoming a nomadic figure typical of the Beat Generation or escaping to Alaska, like the protagonist of To Wild TrailsMize was last seen in a Nevada liquor store in early 2020, wearing a blue Nike polo shirt and slicked back brown hair. According to the search and seizure warrant distributed by the United States Marshals Corps, Mize likes “warm climates, marinas and a luxurious lifestyle.” If he is not caught soon, he may end up moving to Miami or Los Angeles. Even to Benidorm. Anything before you spent more than 20 years in federal prison.