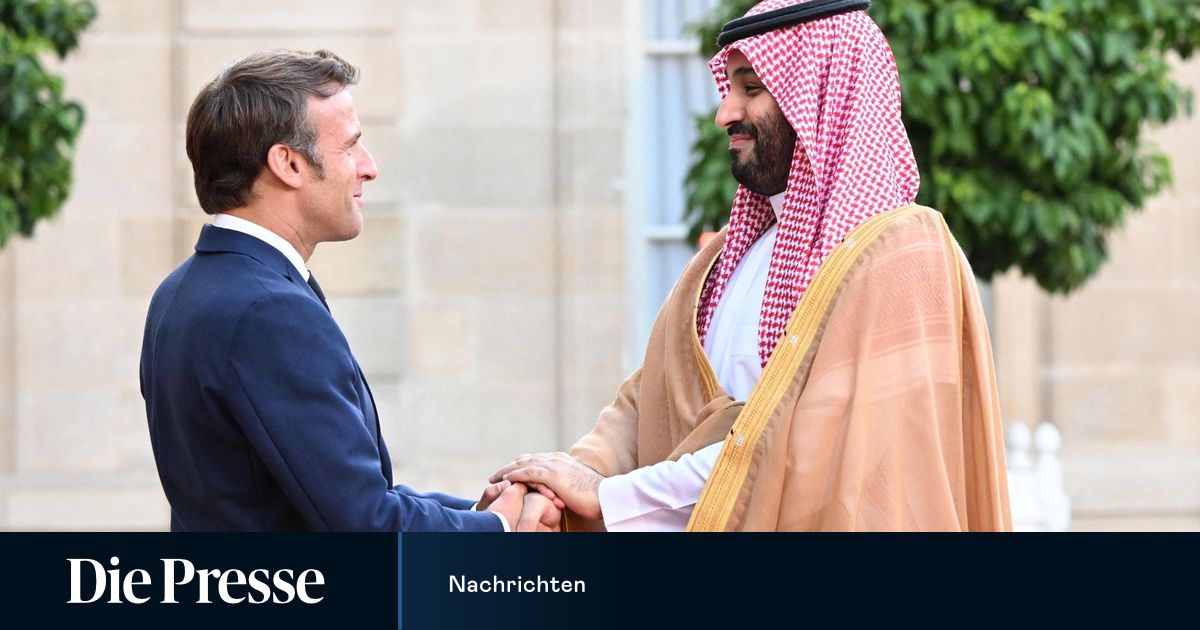 For the first time since the Khashoggi murder, Salman is officially coming to France. President Macron has been heavily criticized for the ceremonial reception.

They dined late into the night: almost four years after the murder of journalist Jamal Khashoggi, the Saudi Arabian Crown Prince Mohammed bin Salman was received in France for the first time. President Emmanuel Macron greeted bin Salman with a long handshake on his arrival in Paris on Thursday evening. Human rights groups had previously protested against the meeting because it would continue to rehabilitate bin Salman on the international stage.

The Saudi Arabian Crown Prince was Macron warmly welcomed, as shown by pictures from AFP TV. Am Salman and Macron shook their right hands for a long time – and then added their left hands. Macron escorted the crown prince over the red carpet up the stairs to the Elysée Palace. Neither of them spoke. This was followed by a working lunch at the Elysée Palace.

Human rights groups have criticized the international rehabilitating of the Saudi corporal prince, who, according to US intelligence, approved of Khashoggi’s murder at the Saudi Arabian consulate in Istanbul. US President Joe Biden recently visited Jedda as part of his Middle East tour and met bin Salman there. The two heads of state greeted each other with a fist punch. During the election campaign, Biden declared that he wanted to treat Saudi Arabia like a pariah state.

“Mohammed bin Salman’s visit to France (…) does not change the fact that he is a mansassin,” Agnès Callamard, the UN special rapporteur on the murder of the government critic, told AFP. “Will be the dismembered corpse of Khashoggi upon meeting Emmanuel Macron and MBS are on the agenda? The climate chaos? human rights? (…) No, it will be about oil and guns,” wrote former green presidential candidate Yannick Jadot on Twitter.

Khashoggi’s Turkish fiancée also condemned Macron’s meeting with bin Salman. “I am shocked and outraged that Emmanuel Macron receiving the executioner of my fiancé Jamal Khashoggi with all honours,” Hatice Cengiz told AFP. “The rise in energy prices due to the war in Ukraine cannot justify – in the name of a supposed realpolitik – confronting those responsible for Saudi Arabian politics acquit political opponents.”

French Economy Minister Bruno Le Maire welcomed the Crown Prince on Wednesday evening when he arrived in Paris. Bin Salman traveled from Greece. The Crown Prince owns a Palace of Versailles-style residence near Paris, which he bought in 2015 for 275 million euros. It was considered the most expensive property in the world at the time. It was built, of all people, by a cousin of Khashoggi, who was later murdered.

The increased interest in Saudi Arabia is also a consequence of the Ukraine war and the associated explosion in energy prices. The West has so far tried in vain to persuade Saudi Arabia to increase oil production so that the price of oil falls and inflation is curbed.

Bin Salman sees the Khashoggi affair as a “tragedy” that is now over. According to Riyadh, those responsible have been identified and convicted. Two years ago, a court in Saudi Arabia sentenced eight men to between seven and 20 years in prison for the murder. The Crown Prince rejects any alleged joint responsibility.

A commando of 15 awaited the journalists

The 59-year-old Khashoggi, who wrote for the “Washington Post”, had wanted to pick up papers for his upcoming wedding at the Saudi Arabian consulate in Istanbul on October 2, 2018. According to official information from Turkey and the USA, a 15-man commando from Saudi Arabia was waiting there, murdered him, dismembered his body and made the remains disappear.