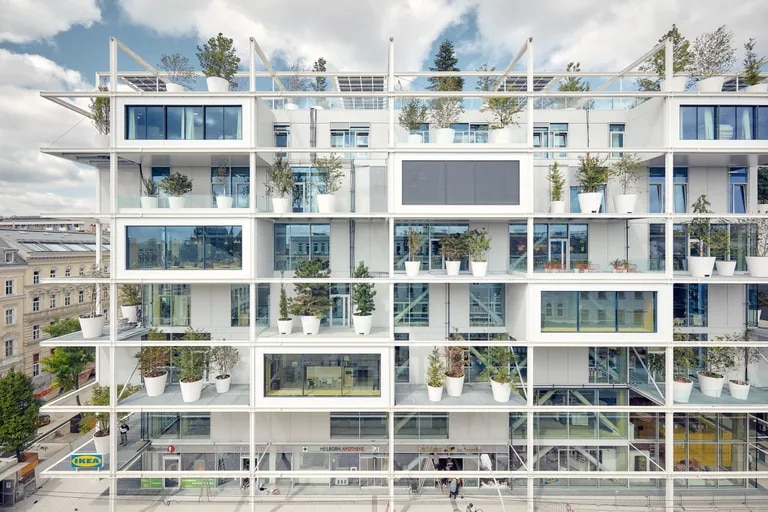 The Swedish ready-to-assemble furniture company, which conquered all the markets in which it landed in the world, opened a store that changes the most well-known traditional image of Ikea, with its gigantic blue and yellow windows. This is the shopping mall that Ikea opened in Vienna, Austria.

Located near the Westbahnhof railway station in the Austrian capital, the mega-local is distributed over seven floors. Sustainability is its most distinctive feature: it has a green facade, full of plants and pots, and its structure in the form of stacked boxes, designed by Querkraft Architekten.

In addition, the seven-story structure that looks like a huge DIY rack also features a terrace that is open to the public, a café, and a 345-bed hostel.

The ground floor opens up to the life and commercial areas of Mariahilfer Straße. The interiors are organized as a “void” that maintains a visual connection between the floors.

This Ikea has 160 large trees on its facade and on top of its roof. It is one of the most important measures in the green island strategy in the city of Vienna. “Trees provide cooling and humidity, a natural and passive air conditioning strategy. The air temperature at pedestrian level will also improve with these measures”, the designers explain.

The Swedish company has 400 stores in 50 markets and now aims to develop in South America with Chile as its kick.

In December 2021, the brand announced that it will stop using plastic packaging by 2025. Now, this grocery store 60,000 square meters goes one step further in the sustainable agenda. In this sense, the mega store has solar panels and hyper-efficient heating and cooling, both essential in a city with extreme temperatures in the winter and summer months.

See also  Jerry came up with a solution to the plastic problem: 'My dream is that it can be bought on AliExpress' - AD.nl