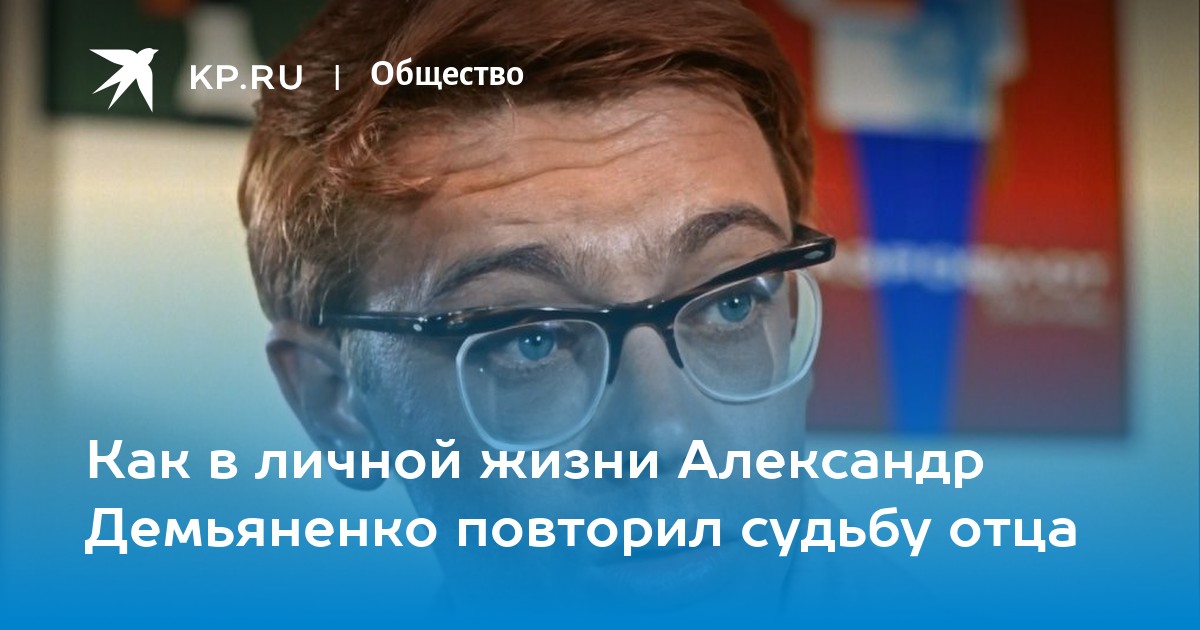 In the cinema, Shurik chose between Lida and Nina. In real life, the actor Alexander Demyanenko chose between Marina and Lyudmila. Photo: “Prisoner of the Caucasus” (1966)

When Alexander Demyanenko was a schoolboy, his comrades often told him: “All in his father.” And here they were right. Sergei Petrovich Demyanenko was known throughout Sverdlovsk. He graduated from GITIS, worked at the Opera House, taught acting at the Conservatory…

– Alexander’s father was a very good man. He was a mass worker, held all sorts of interesting meetings with children, ”recalls Rel Matafonov, a school friend of Alexander Demyanenko. – Alexander’s acting talent, apparently, got from his father. In our 37th school, he was chairman of the council of a detachment of a pioneer organization. Always at the training camp, when I read reports, it was a pleasure to listen to him. And then we were still in the drama group of the Palace of Pioneers.

After graduating from school, Alexander Demyanenko first tried to study as a lawyer, but after only one semester he gave up this business and left for the capital to enter GITIS as an actor. However, in the end, he had to repeat not only his father’s career path, but also his fate in his personal life.

After school, Alexander Demyanenko tried to study as a lawyer, but soon realized that theater was closer to him.

IN CHILDHOOD I LIVED IN TWO HOUSES

His father, Sergei Petrovich, was three years older than his mother, Galina Vasilievna. They met when Sergei worked at the conservatory. Galina was then a senior accountant of one of the local enterprises. Alexander was the first child in their family and shortly after his birth, his father left the family. Fell in love with another woman.

As a result, little Sasha had to live in two houses. One was located in the Pionersky settlement microdistrict on Krasin Street, the other on Mamin-Sibiryak Street. Here his father lived with his new chosen one and their children – a son and a daughter – sometimes Sasha visited him after school. After some time, his parents got back together – Sasha had two younger sisters.

As if repeating this story, Alexander Demyanenko also loved two women in his life and also once left one for another.

Frame from the set of the film “Ivan Vasilyevich Changes Profession” (1973) Photo: kinopoisk.ru

The first wife of Alexander Demyanenko was Marina Sklyarova. They met when they were in school. We went to the drama club together. The marriage was early – at the age of 17 already husband and wife. And when Alexander went to conquer Moscow, Marina went with him.

While Alexander played in the movies, Marina worked with the word – she wrote scripts, collaborated with television. They lived together for 20 years, but their children were never born. And then Lyudmila Nevolina appeared in Alexander’s life. This happened when Alexander and Marina had already moved from Moscow to Leningrad, and Demyanenko himself began to dub films. Many foreign actors spoke in his voice, and some Soviet ones too.

Monument to Shurik and Lida from the film “Operation” Y “, installed in Ryazan.

– Lyudmila worked as a dubbing director, – recalled biographer Fyodor Razzakov. – He fell in love at first sight. Lyudmila went through a difficult divorce from her husband, raised one daughter Angelica, so she was surprised when the artist Demyanenko appeared in their sound production “dressing room”. He called me into the corridor, handed me a beautiful box of chocolates, turned around and left. And before March 8, he appeared again – with flowers and with a box of French perfumes “Klima” – a terrible shortage for those times. Later, I drove Lyudmila home several times.

And one night, Alexander Demyanenko rang Lyudmila’s doorbell and jokingly said, “I came to settle with you forever.” Only the intentions of the actors were serious. Leaving all the property to Marina, he began to live with Lyudmila.

Shot from the set of the film “Operation” Y “and other adventures of Shurik” (1965) Photo: kinopoisk.ru

DIED A FEW DAYS BEFORE THE SURGERY

But Alexander did not continue to repeat after his father. He no longer returned to Marina and until the end of his life was Lyudmila’s husband. Alexander Demyanenko died in 1999. Due to the intense summer heat, uncured heart diseases made themselves felt. They were already going to operate on him, to carry out coronary bypass surgery, but the famous actor did not live up to the operation for several days.

“When he became a big actor, he still remained a simple guy,” recalls Rel Matafonov, a school friend of Alexander Demyanenko. – During the holidays, he often came to Sverdlovsk. We met with him and reminisced about our school years. People always recognized him on the street and admired him. All the films in which he participated evoke only fond memories.

Lyudmila, the second wife of Alexander Demyanenko, survived him by only six years.

“Komsomolskaya Pravda” tells about an actor who always starred in episodes, despite the fact that all of Moscow adored him (More)