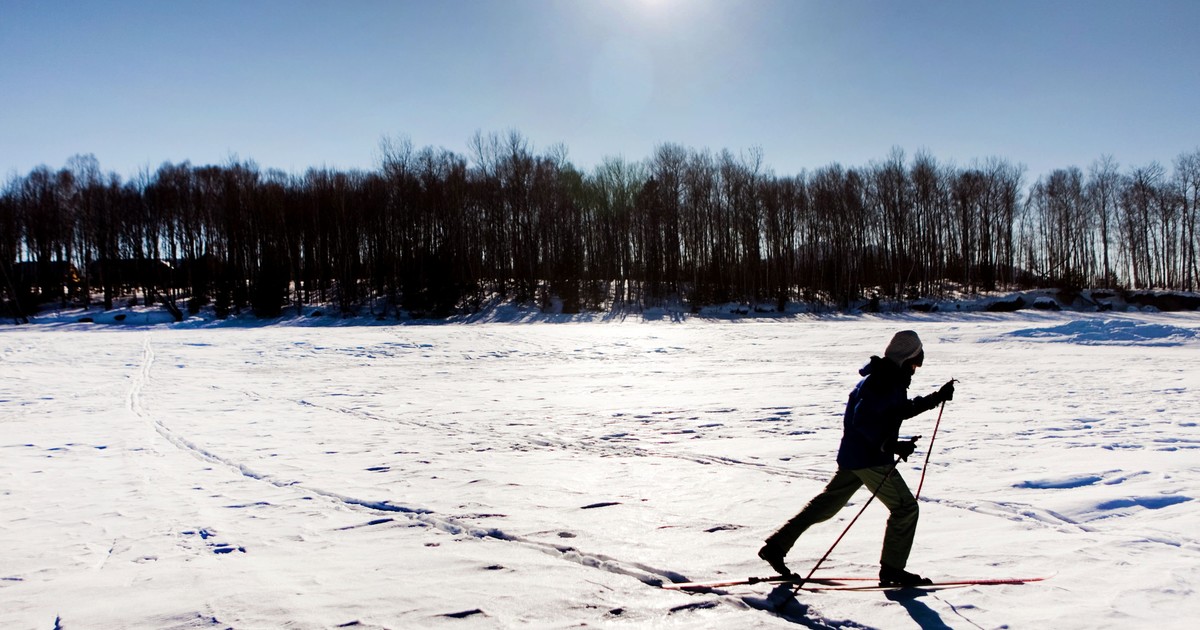 How exercise can tame our anxiety

To better cope with all the grim news this winter about rising COVID-19 cases and so much more, you might want to go outside and play in the snow, according to a new report.

The large-scale study of nearly 200,000 cross-country skiers found that physical activity halved the risk of developing clinical anxiety over time.

The study, conducted in Sweden, focused on skiing, but the researchers said that almost any type of aerobic activity it can help protect us against excessive worry and fear, an encouraging thought as we face another grim pandemic season.

A stair runner climbs the nearly 1,200 stairs inside Harvard Stadium early in the morning in Cambridge, EFE/EPA/CJ GUNTHER

Science already offers a lot of encouraging evidence that exercise can improve our mood.

Experiments show that when people (and laboratory animals) begin to exercise, they typically become calmer, more resilient, happier, and less likely to feel unduly sad, nervous, or angry than before.

Public health research studies, which often focus on links between one type of activity or behavior and various aspects of health or longevity, also find that getting more exercise is associated with a substantially lower chance of developing depression serious; conversely, being sedentary increases the risk of depression.

A remarkable 2013 neurological study even found that exercise leads to anxiety reduction of rodents by causing an increase in the production of specialized neurons that release a chemical that calms overactivity in other parts of the brain.

But most of these studies were small, short-term, or mostly in mice, leaving open many questions about what types of exercise might help our mental health, how long mood improvements might last, whether the men and women benefit equally and if possible exercise too much and perhaps increase the likelihood of feeling worse emotionally.

So for the new study, published in Frontiers in Psychiatry, exercise scientists at Lund University, Sweden, and other institutions decided it was worth looking at mental health long-term of the thousands and thousands of men and women who have participated in the famous Swedish cross-country skiing Vasaloppet over the years.

Celebrating its centenary this winter, the Vasaloppet is the world’s largest cross-country ski racing series, with throngs of runners lining up annually in the forests of central Sweden to whiz, slide and gasp in races ranging from 30 kilometers up to 90K display distance.

“We use participation in a Vasaloppet as an indicator of a physically active and healthy lifestyle,” says Tomas Deierborg, head of the department of experimental medicine at Lund University and lead author of the new study, who is a two-time graduate of 90 kilometers.

To begin with, he and his colleagues collected finish times and other data from 197,685 Swedish men and women who took part in one of the races between 1989 and 2010.

They then matched this information with data from a Swedish national patient registry, looking for diagnoses of clinical anxiety disorder among the runners over the next 10-20 years.

For comparison, they also checked anxiety diagnoses over the same time period for 197,684 of their randomly selected fellow citizens who had not participated in the race and who generally considered themselves to be relatively inactive.

The researchers found that the skiers were found to be considerably calmer for decades after the race than other Swedes, with more than a 50% lower risk of developing clinical anxiety.

This good mood tended to be prevalent among male and female skiers of almost any age, except, interestingly, among the fastest female runners.

The best female runners each year tended to be more likely to later develop anxiety disorders than other female runners, although their overall risk was still lower than that of age-matched women in the control group.

These results indicate that “the link between exercise and reduced anxiety is strong,” said Dr. Lena Brundin, a senior investigator for neurodegenerative diseases at the Van Andel Research Institute in Grand Rapids, Michigan, who was another author of the study.

Plus, according to Deierborg, you probably don’t need to ski long distances in Sweden’s snowy forests to reap the benefits.

Previous studies on exercise and mood suggest that following the World Health Organization’s recommendations of brisk walking or similar activities most days “has good effects on mental health,” he said, and these benefits seem to apply to “wider population“That only the Swedes.

Still, it may be worth monitoring the psychological response to intense training and competition, especially if you’re a competitive woman, he said.

The finding that faster women tended to develop anxiety more often than other runners surprised the researchers, she said, and suggests that perhaps performance anxiety or other problems might be initiated or exacerbated in some people by racing.

“You don’t have to do extreme exercise to get the beneficial effects on anxiety,” Brundin said.

However, the findings have limitations.

The study also does not explain how skiing can reduce anxiety levels. Researchers suspect that physical activity modifies levels of mood-related brain chemicals, such as dopamine and serotonin and reduces inflammation throughout the body and brain, physiologically contributing to more robust mental health.

Getting outdoors among silent, snow-soaked pines and away from Zoom calls while training for a Vasaloppet probably doesn’t hurt either.

According to the researchers, any exercise in any environment should help us cope better this winter.

“A physically active lifestyle appears to have a strong effect in reducing the chances of developing an anxiety disorder,” said Deierborg, who hopes to extend those benefits to the next generation.

He plans to sign up and train for another Vasaloppet in a few years, he said, when his young children are old enough to join him.