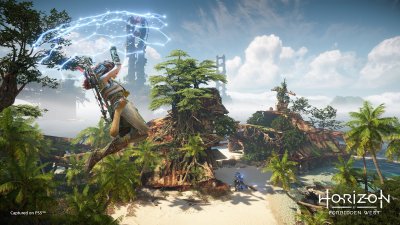 Now that the next one God of War and Gran Turismo 7 have been postponed to 2022, Horizon Forbidden West is the only big exclusivity planned for the end of the year 2021. Finally, if all goes well, because Hermen Hulst clarified that “it is not a certainty” because of the health crisis. The hype is nevertheless huge around the title, especially since its demonstration of gameplay in one State of Play special that impressed more than one.

The developers spoke to several media this week to talk about the game again, and delivered some crisp information. Already at the microphone of GameInformer, the game director Mathijs de Jonge spoke about the differences between the PS4 and PS5 versions. The PlayStation 5 will offer more advanced graphics, with a lighting system in-game exclusive, more details or special technologies, but PS4 has always been kept in mind during development and part of the game testing was done on this platform. What to scare the players who fear a technical restraint to allow an exit in cross-gen ?

In Hardware Zone, this same Mathijs de Jonge declared that of ray tracing would be used on PS5, certainly in connection with these illumination mechanisms exclusive to the next-gen, but also for rendering and audio.

We use ray tracing technology for a lot of things in the game. We use it for the sound engine, for physics, and for rendering. We therefore use a variety of technical configurations, in terms of ray tracing. I’m not a technical engineer so I can’t explain it in more detail than that. But yes, we use it.

Julien Chièze taught him from the developers that there will be a way Performance at 60 fps on next-gen, and mechanically a mode Quality favoring the resolution in 4K for those who wish it. Another interesting point disseminated in the multiple interviews of Guerrilla, IGN noted that the size of the map would be a bit larger than Horizon: Zero Dawn, but above all it would be more dense.

The map is a bit bigger, but in general we really looked to increase the density and add more content, making sure that there is a lot more for the player to do on the map and then render. this content also engaging by telling micro-stories.

Horizon Forbidden West is still not available for pre-order, due to lack of a release date, but you can go for Horizon: Zero Dawn by then: it is available from € 19.99 on Amazon.fr.