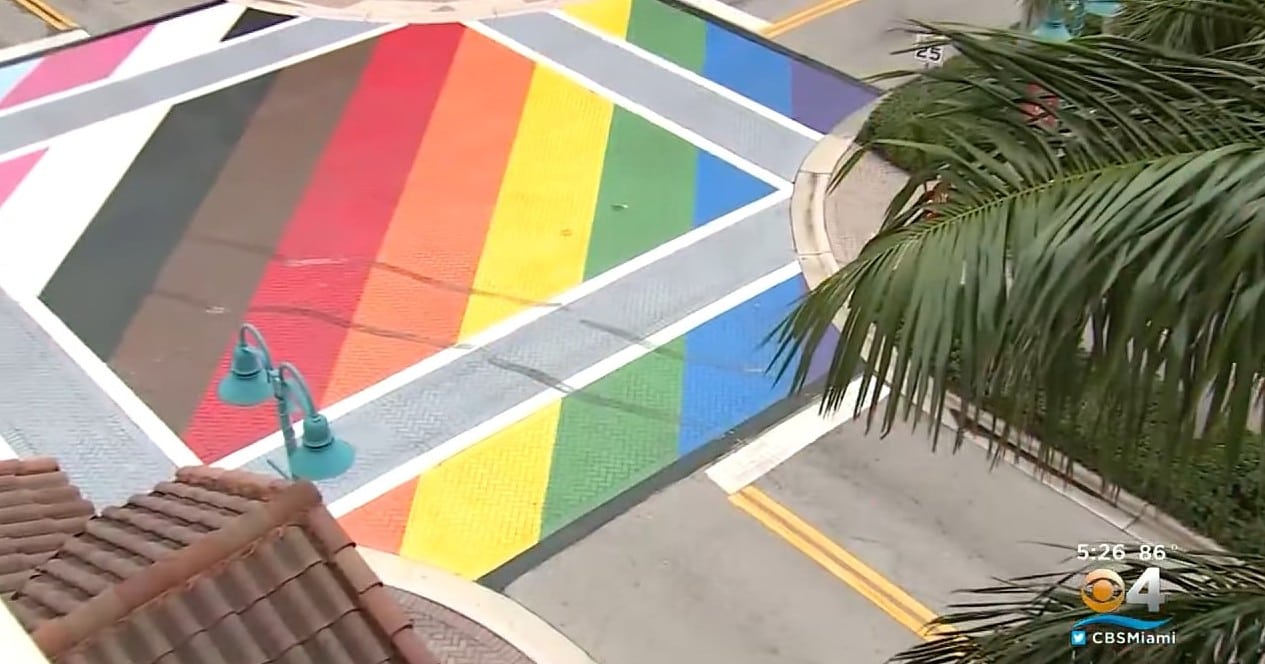 The damage to the rainbow icon was widely reported by local news (Image: Screenshot / CBS Miami)

A court in Delray Beach (US state of Florida) last week convicted a 20-year-old man who, in June 2021, vandalized a rainbow crosswalk with his father’s SUV during a car demonstration for former Republican President Donald Trump by created skid marks. The zebra crossing had been inaugurated just two days earlier on the occasion of Pride month.

As punishment, the judge ordered the perpetrator, Alexander J., who was 19 at the time of the crime, to write a 25-page essay about the massacre at the queer club Pulse almost six years ago. In June 2016, an Islamist terrorist armed his way into the club in nearby Orlando and shot 49 people before taking his own life (queer.de reported). The vandalism perpetrator has to hand in the essay by the beginning of June. According to the Washington Post, the judge gave him the following task: “I want your own summary of why many are so hateful and hit out at the gay community.”

According to the Palm Beach Post, the perpetrator cried during the sentencing hearing. He did not say at trial why he damaged the queer symbol. He simply explained: “I had problems connecting with other people. I was just trying to be accepted by others.” According to court documents, J. has already paid $2,003 to remove the damage to the crosswalk.

The prosecution had asked for a harsher sentence: in their view, J. should spend 30 days in prison and also receive a five-year suspended sentence.

Alexander J. was arrested after a video of his crime surfaced. According to a witness who also attended the demonstration to mark Trump’s birthday, a man in the car yelled, “Smash the gay intersection.” Originally, prosecutors wanted to charge the perpetrator with a hate crime. However, this was later refrained from because J. had not attacked a person, but only one thing. J. pleaded guilty to property damage and reckless driving in March.

The act had caused uproar in South Florida’s queer community. Activist Rand Hoch explained that many queer people no longer felt safe after the crime. During the proceedings, J. apologized to the LGBTI community.