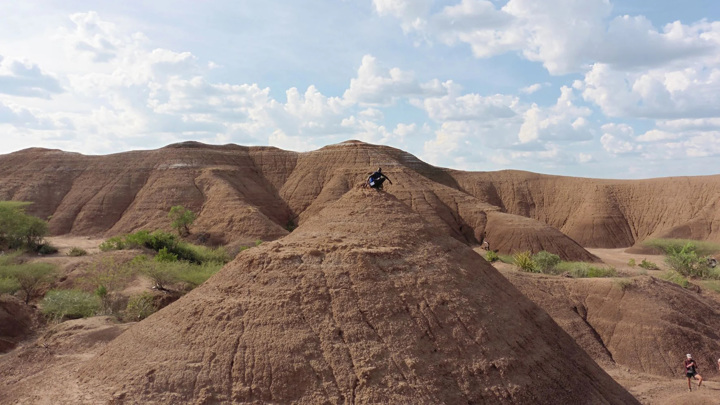 For many years, researchers have been unable to determine the age of the oldest fossils belonging to members of our species. Homo sapiensthat have been found in East Africa. To obtain the necessary information, scientists had to find a non-standard approach: they found out the date of a major volcanic eruption in Ethiopia. So it turned out that the discovered fossils are much older than previously thought.

The fossils, known as Omo I, were found in Ethiopia in the late 1960s. Since then, scientists have tried to accurately date them using the chemical “signatures” of layers of volcanic ash found above and below the deposits in which the remains were found.

An international team of scientists, led by researchers from the University of Cambridge, has reassessed the age of the remains of Omo I and Homo sapiens as a species.

Earlier attempts to date the fossils suggested they were less than 200,000 years old, but a new study suggests they must be older than a colossal volcanic eruption that occurred 230,000 years ago.

The results of this work were published in the authoritative scientific journal Nature.

The remains of Omo I were found in the Omo Kibish Formation in southwestern Ethiopia, in the East African Rift Valley.

The region has high volcanic activity and is a rich source of ancient human fossils and artifacts such as stone tools.

The fossils of Omo I were found under a thick layer of volcanic ash, which no one has been able to date using radiometric methods because the ash was too fine.

For four years, the authors of the study tried to determine the time of all major volcanic eruptions of the East African Rift that occurred at the time of the appearance of the species Homo sapiens. It is known that our species appeared at the end of the Middle Pleistocene, that is, about 200 thousand years ago.

The researchers collected samples of pumice from volcanic deposits and ground them down to submillimeter sizes.

“Each eruption has its own ‘fingerprint’ – its own history of underground evolution, which is determined by how the magma moved under the Earth’s surface,” explains the lead author of the current work, Dr. Céline Vidal (Céline Vidal) from the University of Cambridge. the minerals trapped inside are released, and they can then be dated and the chemical signature of the volcanic glass that holds the minerals together can be determined.”

Researchers have performed a new geochemical analysis to link a “fingerprint” of thick volcanic ash at the Kamoya hominid site to the Shala volcano eruption, more than 400 kilometers away.

The team then dated pumice samples from the volcano and found that they were 230,000 years old. So, since the Omo I fossils were found deeper than this particular layer of ash, they must be over 230,000 years old!

Curiously, unlike other Middle Pleistocene fossils thought to belong to the early stages of the lineage Homo sapiens, Omo I has the unmistakable features of modern man, such as a tall and rounded skull and chin.

However, the authors of the work do not exclude that future findings and new studies will show that our species is even older than it is assumed today.

“We can only date the age of humanity based on the fossils we have, so it’s impossible to say that this is the final age of our species,” Vidal said. “The study of human evolution is always in motion: boundaries and timelines change as new data become available.

But these fossils show how resilient humans are: we survived, thrived and migrated in an area that was so prone to natural disasters.”

By the way, researchers suggest that our earliest ancestors did not live in such a geologically active rift valley by chance – precipitation flowed into the lakes of this region, giving people fresh water and attracting animals that could be hunted, and the rift also served as a natural migration corridor, stretching for thousands of kilometers.

Also, volcanoes provided a huge amount of excellent material for the manufacture of stone tools, and the often changing landscape due to eruptions allowed the first Homo sapiens develop their cognitive abilities necessary to adapt to new conditions.

Over time, the authors of the study expect to refine the age of other fossils in the region.

Earlier, we talked about when exactly people acquired the “modern type” brain. We also reported that climate has had a significant impact on human evolution.

We wrote about the ancient remains Homo sapiens in Eurasia, as well as about fossils from Morocco, presumably belonging to the most ancient Homo sapiens in history. We add that the analysis of the DNA of Moroccan fossils was not successful. This means that scientists cannot say with certainty that they belong to members of our species.

You can find more news from the world of science in the “Science” section of the “Looking” media platform.