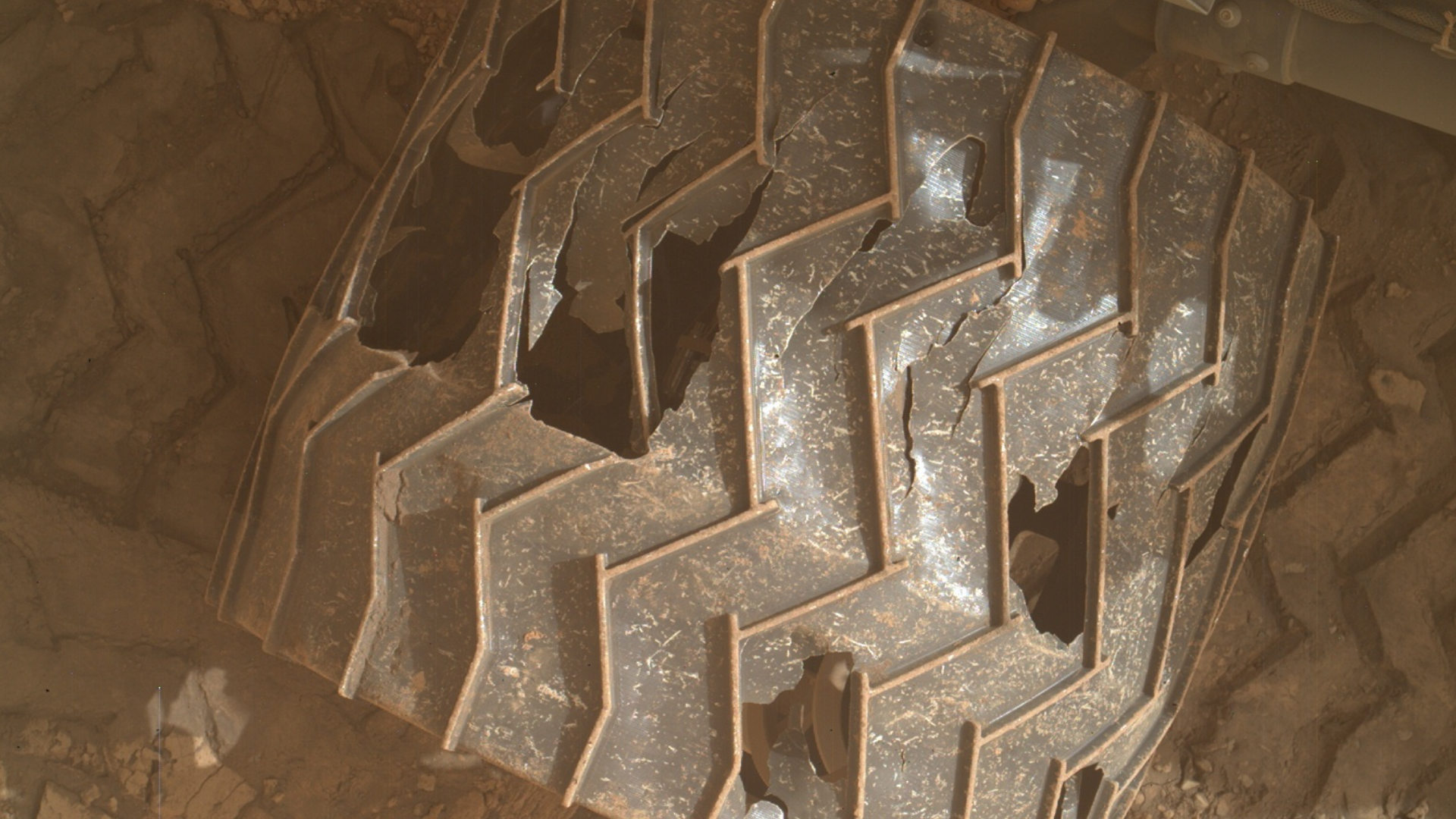 Gradually, the wheels of the Curiosity rover are wearing out on Mars. It’s normal. But should we be worried when we see the gaping holes photographed by the rover at the end of January on these structures?

Ten years on Mars: in August 2022, the brave rover Curiosity will celebrate a symbolic anniversary, that of its first decade spent on the surface of the red planet. Since its arrival, the rover has traveled more than 27 kilometers while rolling. But, on Mars, there are no flat, unobstructed roads. Over time, Curiosity’s wheels are therefore inevitably damaged.

Recently, the robot sent several pictures of its wheels back to Earth. They were taken on January 27, 2022 with MAHLI (“Mars Hand Lens Imager”), one of Curiosity’s many cameras. This is installed on the robotic arm of the rover. It is mainly used to study the composition of rocks, but can also take pictures of the rover.

Yeah, that’s the planet you see through the wheels

Seeing these images obtained at the end of January, one is tempted to seriously worry about the mission: the wheels of Curiosity appear pierced with large holes! « It’s true that when you start to see the planet through the wheels, something is wrong, it’s not normal », confirms to Numerama William Rapin, CNRS researcher at the Institute for Research in Astrophysics and Planetology. Curiosity is mounted on 6 wheels 50 centimeters in diameter, all equipped with their own motor. They are made of aluminium, with studs and springs.

In fact, their robustness has been put to the test since Curiosity’s first spins on Mars. ” The wheel problem is a long-standing issue, which caught us by surprise pretty quicklyremembers the scientist. We are on a planet we know little about. What we knew about Mars was due to earlier rovers, which were smaller and explored areas chosen for the large area of ​​their landing zone. »

See also  Sennheiser headphones on offer: At Expert for a short time with a huge discount

Sharp rocks that could “cut your shoes off”

Curiosity was placed in the Gale crater, chosen for the variety of its rocks. But that had a counterpart, continues Willam Rapin. ” The revolution with Curiosity is that we landed in a much steeper site than before. We had the possibility of landing in a much more precise way thanks to guidance systems. We landed near a very high mountain, in unfamiliar terrain. There, we discovered new types of rocks. “Rocks that have proven to be particularly sharp, from the first year of mission on Mars. ” You have to imagine that it hasn’t rained for billions of years. The rocks are sculpted by the wind. […] If they were on Earth, you wouldn’t have to step on them, they could cut your shoes! »

At the start of the mission, Curiosity took a short detour to conduct analysis. Then he resumed his journey, with miles to go. While it was planned to move relatively quickly (for a rover, a few tens of meters in less than an hour), Curiosity had to be slowed down instead. ” We discovered that the wheels were damaged by certain types of rocks and we learned to live with them. sums up the scientist. The teams had no choice but to deal with these rocks, which risked causing problems for the wheels of the rover.

Thus, it was decided to no longer use an autonavigation system, which allowed Curiosity to move forward independently. He doesn’t have enough finesse to spot the sharpest rocks. So they are humans, rover drivers » who choose the route of the rover every day and know, with experience, to anticipate problems on the wheels.

“Obviously, it will only get worse”

Even if the images of wheels with holes are impressive, Curiosity should still have the opportunity to roll on Mars soon, reassures William Rapin. ” When you see the damage, it starts not to be very pretty, of course. But the wheels still have a structure, the motors are powerful and work well. Since we know how to control damage over time, we know we have enough time ahead of us. With years and experience, the teams have now mastered the way the wheels wear on the Martian surface.

Engineers from NASA’s Jet Propulsion Laboratory thus draw up a map of the damage, including each small metal bar. ” Of course, it’s only going to get worse.warns the expert interviewed by Numerama, but we know that it is not an immortal rover. We have goals in mind and we have plenty of time to achieve them. These holes will start to become more and more impressive, but a priori we will have a mastery over it. »

What if the wheels were one day so damaged that Curiosity could no longer move? Could the mission still continue (assuming the rest of the rover continues to operate)? ” Nasa would surely consider ending the mission, after a whileestime William Rapin. She probably wouldn’t leave much extra time, because it’s quite expensive to maintain this mission. Everything also depends on the place where the rover is immobilized: if its arm works and the place is of scientific interest, we could possibly carry out analyses.

But it seems more likely that it was another component of the rover that failed, before the wheels failed. For example, the on-board computer: we already had to switch to the second copy, in “backup”, because of memory problems a few years ago. ” You will hear about other problems than the wheels in the months or years to come, it’s a complicated machine. »

Above all, Curiosity needs its wheels more than ever, as it climbs Mount Sharp, the mountain at the center of Gale Crater. ” We rely a lot on the wheels, now that we have arrived at this mountain which is 6 kilometers highconcludes the scientist. It’s time to shine! Every meter we manage to climb helps us reconstruct the history of Mars. It took a while to get closer to this building, and now all the meters gained are additional knowledge about the history of the evolution of the past climates of Mars. We have a lot to gain from still being able to ride this mountain. »

Find all our news concerning a Planet