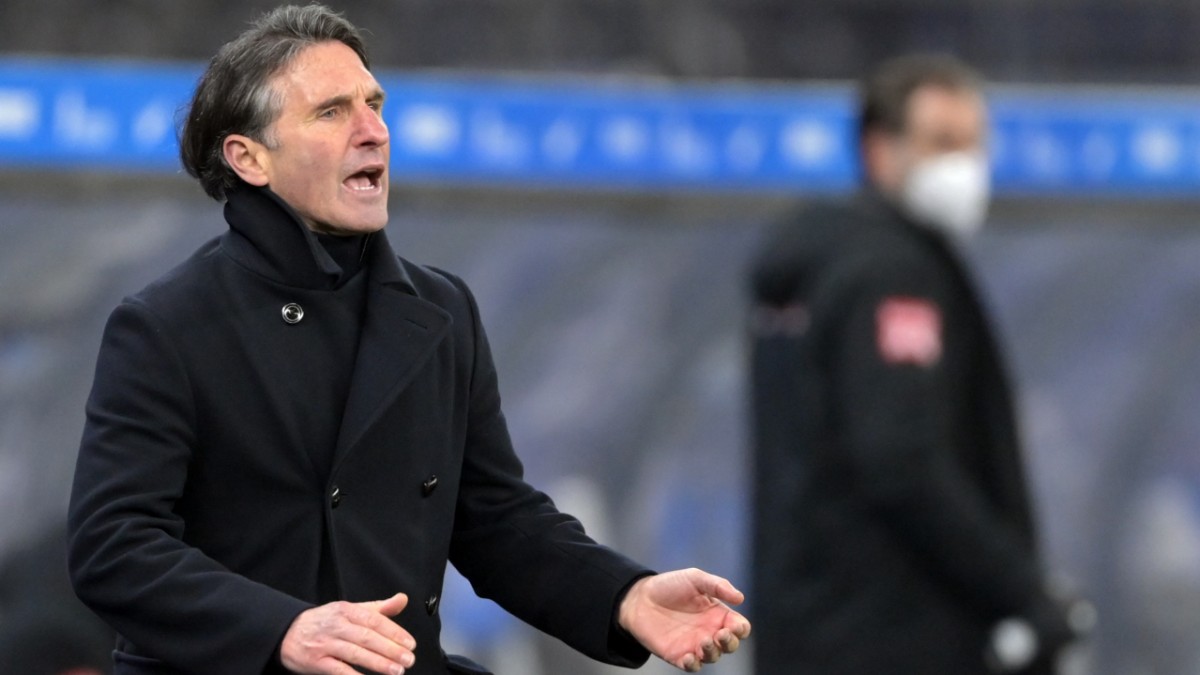 Like life, football is rich in Kafkaesque situations. And Bruno Labbadia has also experienced one or the other. How things went on Saturday when he lost 4-1 with Hertha against Werder Bremen, that hadn’t been in his vita before.

When he was still answering questions from the TV stations, they reported Picture newspaper in their online edition already that a “decision has been made” – against Labbadia. The initially unconfirmed report was shown to Labbadia in a live interview, and what was admirable: he had his emotions largely under control. But he also said bluntly: “Of course we lack the arguments, this is a shitty situation that we don’t like at all.”

Then he went back to the catacombs, spoke briefly with manager Michael Preetz, who must also fear for his job, and waited until shortly before 10 p.m. before he was supposed to comment again at the press conference – on a written question submitted by the press spokesman Herthas read. He has not yet received any feedback from management, said Labbadia. “I got to know and appreciate the people in Berlin so much that you first come to me before you go public. We have such a clear relationship with each other.”

Almost at the same time, Preetz reminded the ZDF sports studio that January was “the month we wanted to score”. The last games against Bielefeld, Cologne, Hoffenheim and Werder were “a single disappointment” that one now has to deal with. So basically it was to be assumed that the end of Labbadias is sealed. The most promising candidate is temporarily Pal Dardai, who had coached Hertha until 2019 and is currently working in the youth department. So far, Hertha has only collected 17 points in 18 games. That is very little for a team that has been upgraded with the millions from investor Lars Windhorst.

That a lot of things are going in the wrong direction at Hertha BSC became obvious in the 21st minute of the game against Bremen. The Herthaners were 0: 1 behind, thanks to a goal from a striker that they themselves awarded Werder (Davie Selke) when they were awarded a very flattering penalty. Matheus Cunha had been fouled and competed himself. He took a tripping start-up – and shot so weakly that it was comparatively easy for Werder’s goalkeeper Jiri Pavlenka to parry the ball.

The thoroughly strange Saturday had a curious start, especially for Preetz: A low three-digit number of Hertha fans gathered in front of the stadium to demonstrate against the whereabouts of President Werner Gegenbauer and Manager Preetz. The fact that the initiator of the event has strong roots in the “lateral thinker scene” also caused irritation among fans who are critical of the duo, which has been in power for years. In the end, the most visible signs that were set were a few posters that were hung in the nearby Hanns-Braun-Strasse on the way to the office. There were no incidents. What they didn’t suspect then: That Labbadia, 54, had made a very resolute decision. Striker Dodi Lukébakio, one of the most expensive players in the club’s history, was not even on the bench for “sporting reasons”.

He paid for his share of the last three games without a Hertha win and Hertha goal in a row (in Bielefeld and Cologne and against Hoffenheim). The fact that it was Selke of all people who scored a penalty (foul on Schmid) to lead Bremen could have been cheered by cynics among the Berlin supporters as breaking a spell; Selke nominally still belongs to the Berliners and is only loaned to the Bremer. This was followed by the aforementioned miss from Cunha and another example of the effectiveness of the Bremen team. Because they largely left the ball to the Berliners, but expanded their leadership. After a corner, central defender Ömer Toprak headed 2-0 (29th).

The Berliner was hardly to be blamed for their commitment. But: They hardly got any really compelling chances against the defensively solid Bremer, the highlight of the first half was a shot from 18 meters from Maximilian Mittelstädt. Until the tide seemed to turn in stoppage time in the first half. Jhon Córdoba headed a really good cross from right-back Peter Pekarik into the Bremen goal from close range.

After the break, the Berliners pushed against TSG Hoffenheim in a similar way as they did during the week (0: 3). “It was impressive how they kept going,” said Werder’s coach Florian Kohfeldt about Hertha. His Berlin colleague Labbadia gradually changed offensive forces – but not Fortune. The greatest danger was again Córdoba with a long-range shot, which Pavlenka parried (55th).

But then Labbadia had to watch fainted as his midfield favored Bremen’s third and fourth goals with blackouts. First the players marveled at an excellent pass from Maximilian Eggestein to Leo Bittencourt (57th), who was completely free in the Berlin penalty area, was able to turn and shoot in – a goal delicacy. After a clear chance through Cunha (67th), the late substitute Joshua Sargent finally hit with a long shot because he was served by Niklas Stark and not attacked by Guendouzi before goalkeeper Alexander Schwolow could not get his arms up properly (77th). And thus probably sealed the end for Labbadia.