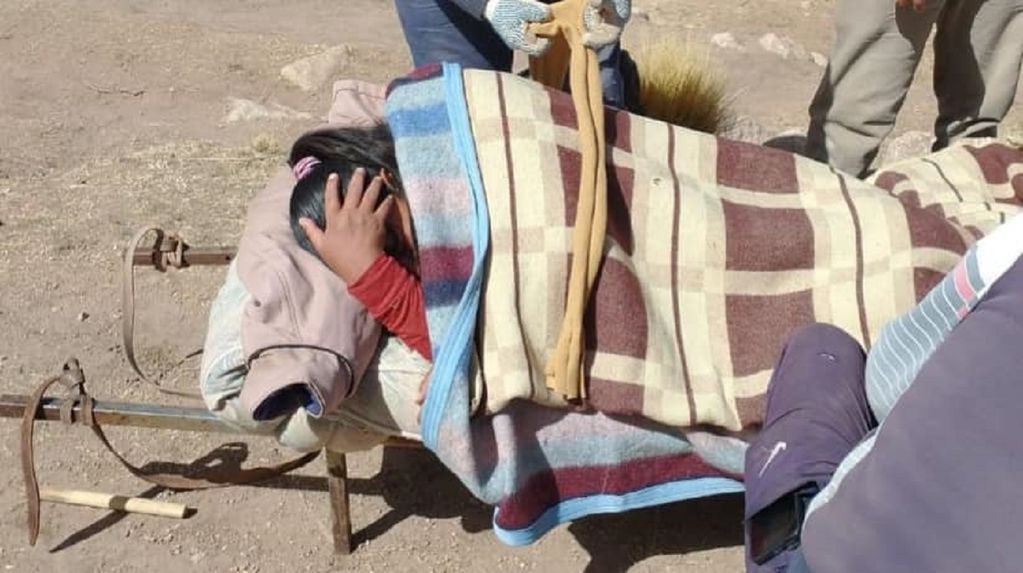 Helplessness and outrage: in Catamarca they carried a woman with a health emergency for six hours

A mattress supported by two iron slats, two blankets and a jacket as a pillow. It was the makeshift stretcher they transferred into Mercedes Gonzalez while six hours of walking up the mountain in the absence of medical care Catamarca. The photo traveled through the social networks and exposed the helplessness that the members of the original community of the fencesa town of 60 inhabitants located at 3200 meters above sea level.

The woman, who lives with her five children in the middle of the hill, was writhing in pain and losing a lot of blood due to the worsening of a uterine fibroid that caused an infection in her urinary tract. With the help of other villagers, he was only able to recover rock well -located 35 kilometers away, it is the nearest town- and from there to the hospital Belén.

I also read: Dancer shot seven times in Rosario drug bust wakes up from coma and communicates through signs

Due to the severity of her condition, she was eventually referred to the St. Mary’s Hospital, 175 kilometers from his home. last night they asked blood donors to be able to operate it.

“There are people who die on the road”

Without a road connecting Las Vallas with Pozo de Piedra, the residents are forced to use the on foot or on the back of a mule. Every time one of them needs medical attention, the drama is magnified. Sub-zero temperatures are common at this time, so the cold is also often a brutal obstacle.

“There are people who die on the road. Last year they brought a man on a stretcher and he didn’t show up. A few years ago a child died of a dental infection.account to TN Ariana Escotorin, local communicator who distributed the images. “I have the census In May I walked for 18 hours and I can assure you that there are places where the State has not reached for 15 years. I met a house where the bathroom was a pit of plastic and sticks. Life there is very difficult”, he portrays.

Andrea Morales Leanza, a lawyer representing the Union of the Peoples of the Diaguita Nation of Belén and Tinogasta, said that the province’s Minister of Health, Manuela Avilatold him that the transfer of the patient from Belén to San Fernando del Valle de Catamarca had already been ordered, “But in the end it wasn’t like that.”

“At the Belén hospital, the doctors did not agree: one said that the lady (Mercedes) should retire, and another said he needed urgent attention”, he detailed. “Later I was able to communicate with the deputy governor (Rubén Dusso) and the referral was made to the Santa María hospital.”

The 12 families who live in the difficult houses located on the hill have electricity powered by solar panels and use spring water. They live by raising their own animals and, when they need supplies, they go down to the village in a herd of donkeys, load goods and go up again.

I also read: An operator suffered an electric shock while working and his hand exploded: “We thought he was dead”

In Las Vallas there is a health post, but it is unused “because no one wants to settle there because of the lack of roads and how difficult life is”, resumes Escatorin.

Since the ambulances cannot enter, the residents are forced to go to the only school in the town in case of a medical emergency. A satellite internet signal is working there which allows them to communicate with Pozo de Piedra and ask for an ambulance or some other vehicle to wait for the patient once they have finished lowering him onto a stretcher.

The National Health Program for Indigenous Peoplescreated in 2016 by Resolution 1036-E/2016, “aims to improve health coverage and accessibility conditions for the Public Health System for Indigenous Communities throughout the country from an intercultural perspective,” says the official document of the Ministry of Health of the Nation .

The initiative reaches a population of 373,145 persons throughout the country and has an annual budget of $131,445,000according to official records released by Telam earlier this month. In Las Vallas, meanwhile, they suffer from the lack of access to decent medical care.

“The same structural problem that Las Vallas has is also suffered by the communities of Las Lajas, Peñas Negras and El Tolar. They all suffer from a lack of access. There is no way”, notes Morales Leanza. TN He tried to communicate with local authorities and the provincial health portfolio, but at the end of this note he had not received any response.

Catamarca has a sanitary plane those days ago was the linchpin of a criminal charge for embezzlement against Raul Jalilgovernor of the province, and Claudio Saragusti, secretary of aeronautics.

I also read: He is from Cordoba, he had to leave his wife and daughters in Russia and is asking for help to bring them: “They are starving”

The presentation was made by the opposition provincial deputy Hugo Avila (Frente Amplio Catamarca), which a “Improper use of the medical aircraft for personal benefit or that of third parties”. It was after it became known that the plane was in Ushuaia during the past weekend.

“It is incredible that the aircraft that arrived in Catamarca and that became part of the state’s heritage, that is to say of all Catamarcans, is used under the registration number LV-JWN. only for pleasure trips and has definitively lost its sanitary character”insisted Ávila in his presentation before the attorney general’s office of the province.