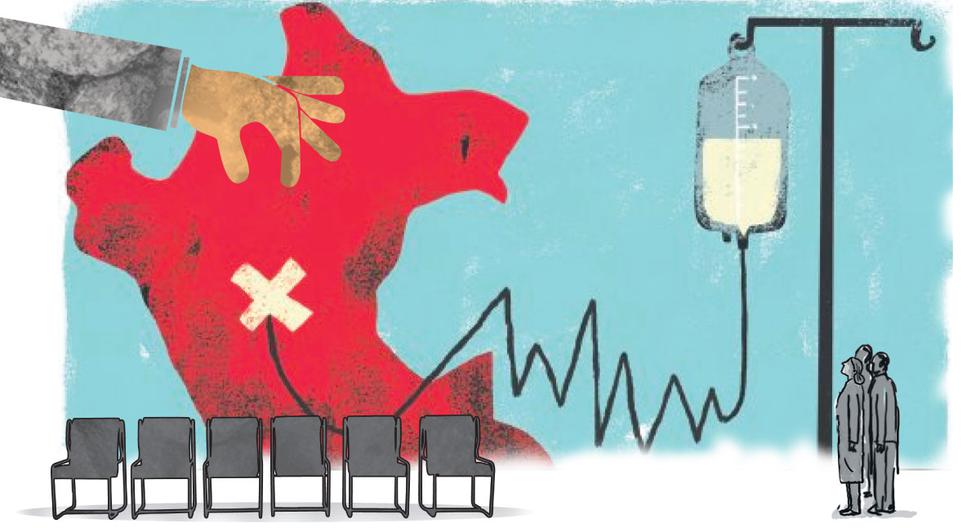 “We are the country with the highest death rate from COVID-19 in the first and second wave, and that should have woken us up. We had to transform our system.” says Dr. César Portella, president of the Public Health Commission of the Medical College of Peru (CMP).

ALSO READ: Social outbreak: In Peru, on average, a conflict occurs every week

Through the analysis of information from the Single National Repository of Health Information (Reunis), the National Center for Epidemiology, Prevention and Disease Control (CDC), Ministry of Health (Minsa), Peru Compras, Comptroller General of the Republic, among others, ECData made an x-ray of three diseases: COVID-19, monkeypox and anemia, and the state of mental health in Peru.

In the case of the coronavirus, the figures show that, despite the fact that this disease was less lethal in the year thanks to vaccination, the vaccination target was not reached: 21.8% of adults still need to have the third dose. Similarly, 56% of children aged 12 to 17 and over 66% of children aged 5 to 11 do not have a second dose. In September this year the Comptroller General of the Republic warned of vaccine losses of more than 11.2 million doses.

On the other hand, there are more than 3,600 cases of monkeypox. 96.5% agree with men. Of these, 2,189 are between 30 and 59 years old. Although the average number of weekly cases fell from 67 in the middle of the year to 4 in December, the progress of vaccination is not known. To date, the Minsa has bought 9,800 bottles, half of which have arrived. On Monday, November 7, the vaccination process began, but only for people living with HIV.

See also  What are the advantages of the approved PCR certificate for travel abroad? Health clarifies.. video

Regarding anemia, the figures show a 43% increase in cases from the beginning of the year to date. It went from 490,000 cases in January to 700,000 in September. The affected regions went from 14 to 19 and the budget for improving care and treatment capabilities for people with anaemia, and for the prevention of anemia and chronic malnutrition barely corresponds to 0.09% of the sector’s total budget.

Portella explains that when it comes to anemia, children from newborn to three years old have a high rate in the country. “It is in regions like Huancavelica, Puno, Ucayali and Cusco where we find the largest number of children with anemia and this will hinder their growth and development. Anemia slows brain development in children and the impact is lifelong. It was not possible to control anemia in Peru”, warn.

Finally, although investment in mental health increased in 2022, it does not even represent 2% of the sector’s budget. In addition, attention is reduced and there is a waiting list. Lima concentrates the largest number of patients attended, with 45%. In more than half of the regions, there is not the minimum number of professionals to handle cases.

“There is a reservoir of unsolved questions about all chronic diseases in the country,” says César Portella. As he explains, public strategies were not the most appropriate and the figures show the impact of volatility and political mismanagement of the sector. “This is a result of the constant changes of authorities within the Ministry of Health and the poor selection of officials,” he says.

Portella mentions that Peru currently has a high number of cases of monkeypox worldwide. Although not fatal, it is worrisome, especially for those who have comorbidities.

See also  Facial paralysis in Guanajuato: They close an operating room at the T-21 clinic in León

In the same vein, Pecy Mayta-Tristán, research director at Southern Scientific University, maintains that we maintain a fragmented, underfunded and poorly responsive health system. “Here we see the mismanagement of Peru Libre in the sector, which caused the Minsa to lose leadership,” he emphasizes.

One of the urgent measures taken by the CMP is to raise the first level of attention. At this level it is possible to solve 82% of all diseases. However, only 64% of enterprises are operating and 94% of them do not have sufficient installed capacity.

“They don’t have human resources, good infrastructure, medicine, equipment to take auxiliary tests. This means that we do not have a good containment of the problems that will later reach the hospital in a serious way”, warns Portella.

Similarly, the number of cancer patients has also increased. “People with advanced cancer problems are coming up because they didn’t have adequate control during 2020, 2021 and even 2022. Diabetes is another problem that has increased. So, the strategies have failed and a new course must be taken in the coming year,” he emphasizes..