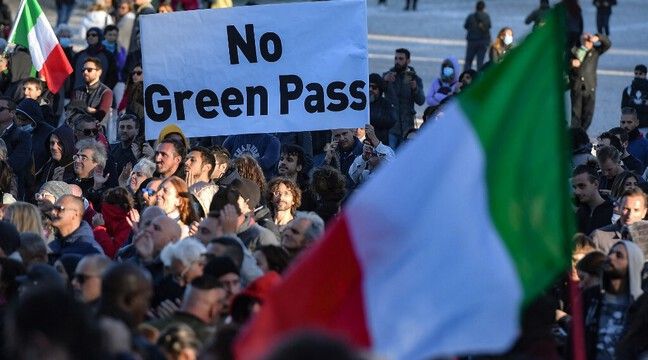 The demonstration Saturday in Novara, in northern Italy, opponents of the health pass “disguised” as deportees caused a shock wave in Italy, both in the political world and in the Jewish community.

“The day before yesterday in Novara, we saw striped pajamas symbolizing deportation to the Nazi extermination camps. These are images that I never thought I would see, ”denounced the president of the Union of Italian Jewish Communities (Ucei), Noemi Di Segni, in a column published Monday by the daily La Stampa. They are “images marked with stupidity and absolute ignorance and at the same time dangerous”, she said, deeming “unacceptable to consider them as a manifestation of freedom of expression”. It is an “intolerable contempt”.

Black and white stripes and numbers

Since October 15, the obligation to present the health pass has been extended to all workplaces, a measure that has led to protests in several towns on the peninsula. The Italian media have largely echoed that of Novara, a city of 100,000 inhabitants between Milan and Turin.

At the head of the procession, in addition to banners such as “Stop the dictatorship” or “Do not give in to blackmail, resist!” Protesters had dressed in the clothes of prisoners from Nazi camps to compare the anti-Covid restrictions to the Nazi dictatorship. In addition to the black and white stripes of their clothes, some demonstrators had affixed a number, in allusion to the number that prisoners of camps like Auschwitz had to wear as a sign of recognition.

The Italian Minister of Health Roberto Speranza said he was “shocked by these people who refer to the concentration camps”. The mayor of Novara Alessandro Canelli, member of the far-right League of Matteo Salvini, expressed his firm condemnation: “Compare an ideological position on a vaccine or a health pass to the most tragic page of our history and to people who were deported, humiliated, tortured and murdered is simply shameful ”. “They could not have chosen a worse way to express a position on which we can more or less agree,” he lamented.

The health pass certifies that its carrier has been vaccinated, cured after contracting Covid-19, or has a recent negative test. The first European country to be affected by the epidemic in February 2020, Italy paid a heavy price with more than 130,000 deaths. At this stage in Italy, nearly 83% of people over the age of 12 are vaccinated.