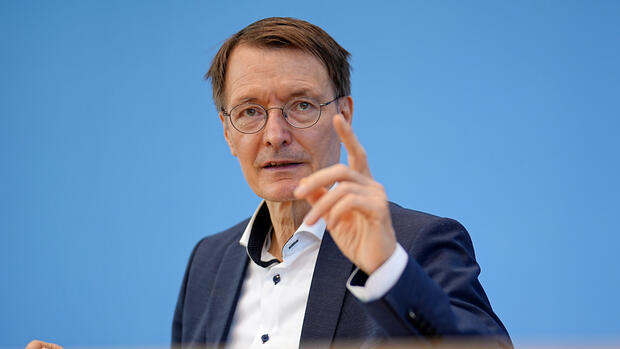 Berlin Health Minister Karl Lauterbach announced on Wednesday, 15 minutes late, what he had prepared weeks earlier with a draft law: the federal government will introduce record contributions for statutory health insurance. The press conference had been delayed because of the ongoing cabinet meeting, in which the SPD politician had previously obtained the approval of the ministers involved – in particular Finance Minister Christian Lindner (FDP).

There was massive criticism of Lauterbach’s plans against the enormous deficit of the health insurance companies, which the minister put at 17 billion euros. Not only should the additional contribution of 1.3 percent increase by 0.3 percentage points.

Also planned are the reduction of the financial reserves of the funds by four billion euros, a tax subsidy of two billion euros, the elimination of the extra fee for new patients and cuts for the pharmaceutical industry. The resistance in Lindner’s house was particularly directed against the latter measures, which is now also evident in the final cabinet draft: The solidarity tax from pharmaceutical companies originally planned by Lauterbach in the amount of one billion euros can no longer be found there.

The industry warned of massive job cuts and that billions in investments were not made. Instead, Lauterbach announced that the manufacturer discount for patent-protected drugs would be increased from seven to twelve percent.

The companies see themselves endangered not only by the higher manufacturer discount, but also by measures such as the extended price moratorium. According to this, price increases determined unilaterally by the manufacturer may not be charged to the health insurance companies.

The federal government is sending “the completely wrong signals for a safe supply of medicines in Germany and Europe,” said the chairman of the Federal Association of the Pharmaceutical Industry, Hans-Georg Feldmeier, the Handelsblatt.

The price moratorium takes the opportunity to pass on the rising costs to customers. The Federation of German Industries (BDI) was also appalled. “The market for healthcare services is in danger of thinning out,” warned Iris Plöger, a member of the BDI management board.

There is also a change in another area. In particular, recourse to insurance reserves was met with criticism. This would have brought numerous health insurance companies into even greater financial difficulties, as can be seen from an analysis by the National Association of Statutory Health Insurance Funds, which is available to the Handelsblatt.

>> Read here: New escalation in social contributions – What to expect for the contributors

According to this, 31 cash registers would have fallen below the statutory minimum reserve of 20 percent of a monthly issue – i.e. almost every third cash register. The reason is that, according to the original draft, all funds with a reserve of more than 0.5 months’ expenditure are not allowed to raise their additional contribution. This is now suspended for at least 2023. But there was also criticism from the box office.

Critics: Draft to increase the contributions does not correspond to the coalition agreement

The access to the reserves is a “massive intervention in financial autonomy,” said the chairwoman of the National Association of Statutory Health Insurance Funds, Doris Pfeiffer, to the Handelsblatt. Another problem is that the reserves should be limited to half a month’s expenditure.

Against the background of higher expenditure by individual funds, this is not sufficient “to ensure the financial stability of the statutory health insurance.” The higher additional contribution is also “the wrong signal” in view of inflation and an impending economic crisis.

There is also a desire for reforms in the traffic light coalition, which must approve the draft in the Bundestag. The criticism there was great because the measures mentioned in the coalition agreement were not reflected in the original draft.

Among other things, it was agreed to cushion the burden on the cash registers more through the contributions for Hartz IV recipients. If this cannot be “achieved in the short term”, other measures are needed, such as a higher contribution assessment limit, demanded the Greens health politician Maria Klein-Schmeink.

More: Financial needs of the health insurance companies rise to 28.5 billion euros – financing becomes a problem for the traffic light