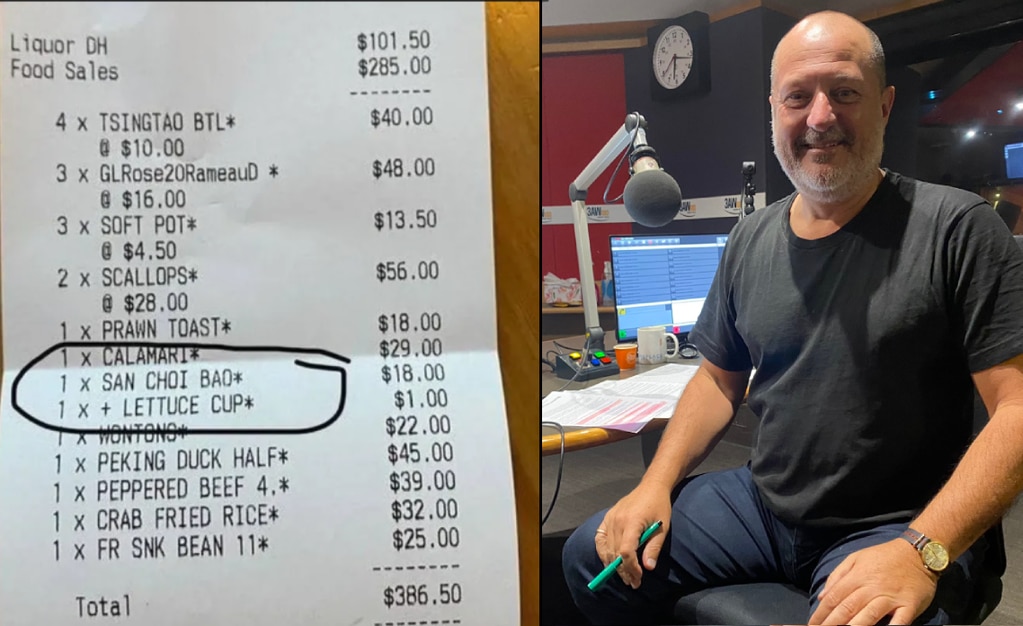 Two men went to eat at a Chinese food restaurant in Australia and when they received the bill they noticed a detail that made them explode with indignation: they had been charged extra for the lettuce, which for them was a constituent ingredient of a dish they had ordered. Since we live in the 21st century, diners complained on Twitter and the post went viral.

The incident occurred in a Chinese restaurant in the city of Melbourne and the outraged customers turned out to be broadcasters Ross Stevenson and Russel Howcroft, who have a show called 3AW Breakfast.

I also read: They have been dating for two years and discovered that they could be sisters

“This is cheeky… I’m sure lettuce is a constituent element of san choi bao, not an optional extra!” they wrote, angry about the one Australian dollar, along with a photo of the ticket as proof of the alleged scam. The aforementioned san choi bao clearly appears on the bill, and below it, an extra dollar for a “plate of lettuce”.

What is a san choi bao

To understand the outrage of the announcers, a quick search on the internet is enough. San choi bao consists of sauteed and seasoned minced meat served and eaten with lettuce leaves, which are served on a plate. In other words, lettuce is an integral part of the dish.

Many called the announcers “stingy” for complaining about a $1 surcharge when they had spent 386 Australian dollars and 50 cents on a feast of dishes, including half a Peking duck, crab fried rice and prawn toast.

“If you’re spending that much on all the other dishes, you have no right to complain about the surcharge to the lettuce”, expressed a user; “They are paying AUD386.50 in food and drink and you complain about AUD1?”, wrote another, in the same vein.

See also  Mice and spiders invasion in Australia: phobic, do not watch this video!

Others supported the broadcasters and considered the surcharge “ridiculous.” “they are just thieves”, one user wrote.

I also read: He left his daughter a multimillion-dollar inheritance under two conditions that she does not want to fulfill

Another tried to understand the reason for the extra and elaborated the following theory: “The san choi bao must have come with lettuce. But sometimes there is too much mix, so restaurants always charge for more lettuce.”

According to Yahoo Newsthe surcharge for lettuce could have to do with the rise in food prices throughout the country, and especially that of leafy vegetables, which are going through a period of scarcity in the market.