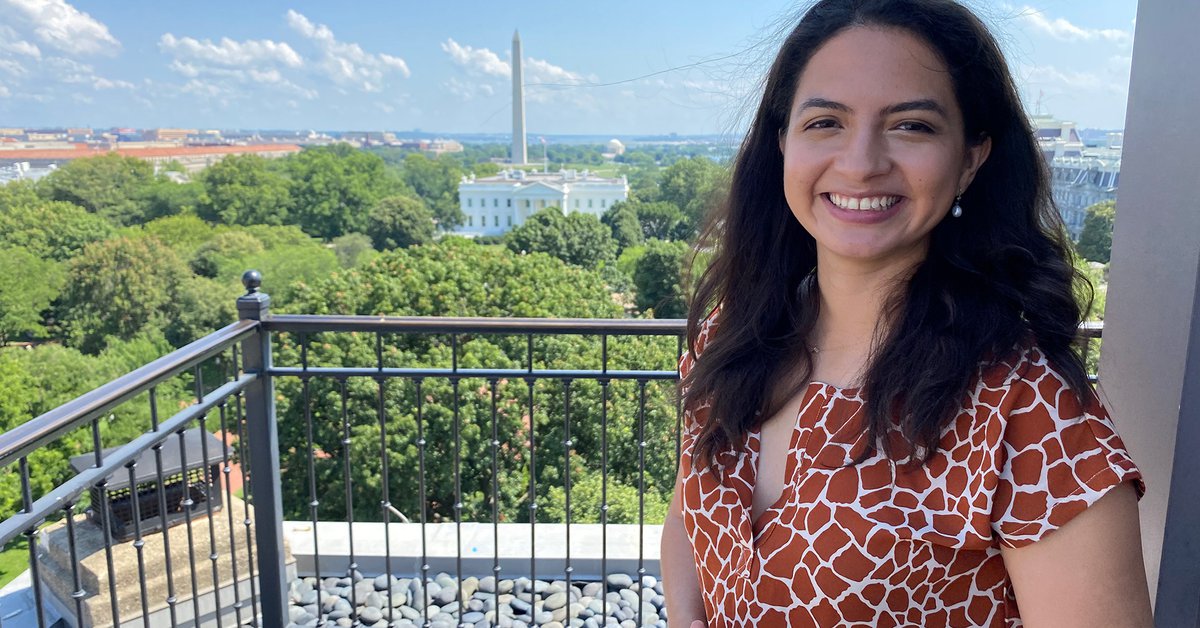 Jennifer Molina, a senior White House official, during a pause in her interview with Infobae in Washington DC / SEBASTIÁN FEST

Washington DC When Jennifer Molina first entered the White House as an official in Joe Biden’s new government, she was still in her twenties. Born in Colombia, the daughter of a single and undocumented mother until she entered high school, Molina is, at 30 years old, one of those responsible for the fact that Latinos, African Americans, religious groups, LGTBIQ + collectives and many other communities feel capable of achieve what she is living: the American dream”.

“I came from Colombia with my mother, I was six years old. She wanted the American dream for me and my sisters. In Colombia she was a single mother and wanted a better future. And here we are “, says Molina during an interview with Infobae on the top floor of the Hay Adams Hotel, from which there is a privileged view of the building where he works, the White House.

And what does your mother say about having a daughter working in the White House? “She is super happy, proud.”

The young White House official pauses to think and says: “The truth is that my mother’s bet turned out well for all of them.”

Graciela, the brave mother, is from Cali, and Jennifer was also born there, who in the last 24 years only once returned to the land where she was born.

“I came back at 18 to know where I came from. I have been to Cartagena, on the coast, but I did not return to Cali. It is today that my mother only speaks to us in Spanish. And that’s why we all talk about it ”.

That Graciela left Cali to settle in Connecticut and that Graciela only spoke Spanish with her daughters ended up paying her dividends, although it was not easy.

“I lived in the United States as an undocumented person. It wasn’t until I got to high school that I had the documentation. In Connecticut we had family, that was very helpful ”.

As summer light floods the restaurant from which much of Washington can be seen, Molina laughs as she admits that she is “always the youngest” at her jobs. Married, she has no children (“but she does have a dog”), and she feels an enormous responsibility for the position entrusted to her by the Biden government.

“This position has never existed, it is new! Under the Obama administration there were even many who felt forgotten. The great priority is that the communities feel that someone in the White House always listened to them and that very different issues were always traded with them ”.

When Molina talks about “very different issues” he gets to the bone of the idea that permeates his government: flee from the ghettos, from stigmatization.

“We speak with the Hispanic community about issues of education, the economy, climate change, and not just migration”

“Something that we do differently from other governments is talking to the Hispanic community about education, the economy, climate change, and not just migration. The same with the African-American community, with which we do not only talk about racial issues, but basic issues that anyone discusses. That is our top priority. And leave the Democratic Party in a better position to win not only the midterm elections, but also the presidential one. “

“People, regardless of their origins, care about the same things as their neighbor from a different origin. That is a priority for us, many people just want to focus on simple and big issues: how to improve the lives of their children, how to progress in their work. We are very focused on that, on talking about everything to all the communities every day. There are common messages for the Latino from Orlando, the white from Minnesota, and the African-American from the Bronx: sell and explain the president’s vision, ‘build back better’, rebuild better ”.

Gender issues, training to create your own company, support for mortgages: the Biden government, says Molina, wants to give opportunities to those who do not have them, to those groups that were the hardest hit by the COVID pandemic. “And let’s not forget the issue of student debt, because we know that the Hispanic community is young, so it is a great focus for us. Nor about what the Department of Agriculture is doing to improve the lives of people who are working on rural farms. “

The Molina offices, whose official position is that of “Senior director of communication for coalitions“They are on the first floor of the White House, in the West Wing.

“It’s a great experience working there, every time I walk those corridors I say to myself ‘Oh my God!’. There’s a lot to do, you feel when you walk in that it’s a ‘come on, come on, come on!’. Everything is very intense, everything moves very fast, and there are millions of things happening at the same time, because there are many different priorities. And we are trying to do everything ”.

There, in that big white building, works Jennifer Molina, one of the women who articulates the relationship of @JoeBiden with Latinos, African Americans, LGTBIQ +, evangelicals and any other minority in the United States. She tells it herself 👇 pic.twitter.com/3vq3kqrLFQ

After working on the Hillary Clinton campaign in 2016, between 2020 and 2021 Molina was director of communication for Latino media on Joe Biden’s campaign and a spokesperson for the transition team before Biden took office in the White House. on January 20 of this year.

Molina is one of four high-profile Latina women in the White House. There are also Pili Tobar, Deputy Director of Communications, Julissa Reynoso, Chief of Staff of the First Lady, Jill Biden, and Julie Chávez, Director of Intergovernmental Affairs, a function that acts as a hinge between the federal, state, local and tribal governments.

“Compared to the Obama years, we are a much smaller team in communication. The covid and climate change, priorities, took resources and our team is smaller today. Small but strong, that is what we always tell ourselves, ”says Molina with a smile.

In his walks through the corridors of the building from which the United States is governed, Molina has met Vice President Kamala Harris more than once. He sees the president from afar, although during the campaign he had frequent treatment: “He always has something special for each person in the deal.”

The day he sat down to talk to Infobae, Molina’s day had started at five in the morning. “But I usually come to the White House walking from my house and I get here at 8.30. When I finish? It depends on the day … And the truth is that we are pending 24 hours and seven days a week ”.

Molina admits that getting to the White House was always “a dream” for her. “I have worked in political campaigns, in NGOs … Politics was always very important to me. I worked to get to where I am, a position that helps in the strategy of the entire government. I studied Political Science and from an early age I understood that you can’t reach people if you don’t have a message, a vision to offer. I learned to persuade people, to make them see things ”.

His passion for international relations took a back seat to his passion for domestic politics. Would you like to go to Congress? Molina laughs.

“I don’t know, I don’t know … I have no aspirations for Congress, I think there are many different ways to make changes.”

The government of Biden and Harris has a lot at stake vis-à-vis Latinos with its plan to reform Central America to reduce the flow of immigration to the United States. There is a $ 4 billion plan to help meet that goal, and Vice President Harris is in charge of the matter, just as Biden oversaw Latin America in his years as Vice President of Barack Obama. Harris was recently in Mexico and Guatemala to promote that mission in what is called the “Northern Triangle”: Guatemala, Honduras and El Salvador.

“We are willing to work with everyone. We pledged $ 4 billion for the region. With work it can be achieved “

“She is obviously the ideal person to handle everything, she is ready to create different programs, ready from the beginning to handle the situation. During his visit to Mexico and Guatemala, he announced different initiatives that point to the reasons for migration. It seeks to create economic benefits in the region. It is very focused on this issue and it will do as much as possible to work with each country and handle the situation ”, assures Molina.

Honduras, designated as a narco-state by many leaders and agencies in the United States, is the great stone in the shoe of that plan. Molina is confident that it will not be an insurmountable problem.

“Our administration has clearly shown that it is not afraid of difficult situations. We are willing to work with everyone. We pledged $ 4 billion for the region. With work it can be achieved ”.

Harris has already told Central Americans and Mexicans that, for the moment, it is best not to try to migrate to the United States. The vice president was criticized for that phrase, which can be a boomerang and generate a “call effect.” What would Molina say to those men, women and children who, like her, want to fulfill the “American dream”?

“Nobody ever wants to leave home. People leave out of desperation, to search for something better. With this new president, the United States believes in investing in each region with needs so that people do not want to leave their home. And for those who do we are trying to create a better asylum system, which was totally destroyed in the previous term. We are just in July, but very dedicated to improving the situation ”.