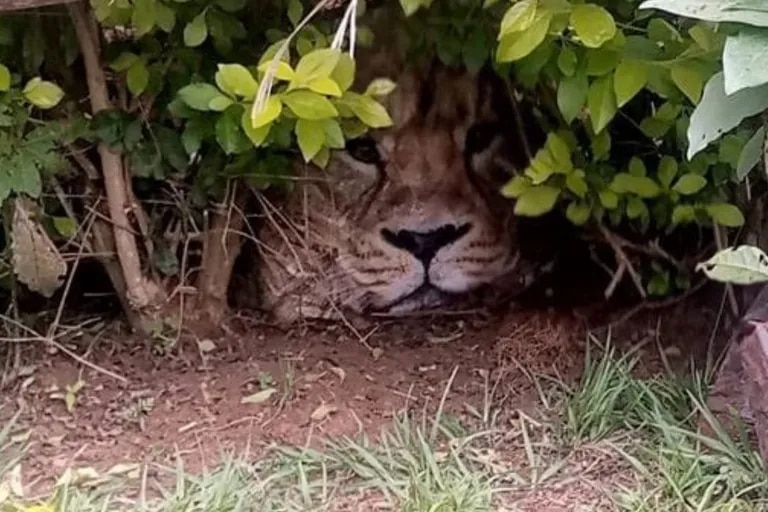 He thought there was a lion in the garden of his house, but what he discovered left everyone stunned

The inhabitants of the town of Kiangua, in Kenya, lived in fear for several hours after noticing the presence of a lion hidden in a bush. In the midst of fear, they had no choice but to call the animal preservation and rescue services to take charge of the situation. But, upon arriving at the place, the experts were in for a big surprise.

For several hours, the neighbors noticed that under the vegetation, camouflaged among some rubblethere was a wild animal that had scared several people, who without hesitation warned the environmental authorities of the county.

As reported on the Twitter account Kenya Wildlife Service, “the event had an interesting twist to what they thought when they received numerous calls phone calls from the locals, from Meru county, about and alleged lion hiding in a hedge.”

After the warning of the people passing through the garden of the house where the alleged animal was hidden, the “KWS Meru” crew quickly attended the scene in an attempt to contain the situation and “avoid a possible case of human-wildlife conflict.”

However, what they found left them stunned. “Upon arrival, the rangers were shocked to discover that the alleged animal was nothing more than a supermarket bag with the realistic image of a lion printed on the side”, they indicated.

The authorities pointed out that despite the fact that it was all a false alarm, they praised the neighbors for avoiding any confrontation with the alleged wild animal. “You can kindly call our hotline or toll-free number for assistance and to report any wildlife-related emergencies,” they said in a third tweet from the Kenya Wildlife Service account.

On the other hand, the environmental authorities they urged locals to visit the area park to find out about wildlife, where they have “real lions” and the Grevy’s zebra, which is in danger of extinction.

In the images they shared you can see that the bag is from a world-renowned supermarket chain that prints packages with realistic detailswhich surprise more than one. One color beigehad been used to store a plant, so it was in a vertical position that confused more than one distracted person passing by.