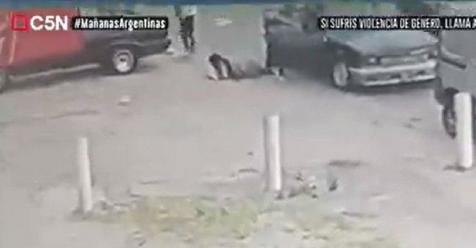 He shot dead his ex-partner, injured his children and tried to escape

A subject shot his ex-partner to death, which he finished off when she was lying on the floor after receiving a first shot in one of her hands, and wounded one of her children -on Thursday afternoon- in the Buenos Aires town of Rafael CastilloWhen he tried to escape, he was hit by neighbors who reduced him and began to beat him, for which he had to be transferred as an apprehended to a hospital, reported judicial and police sources.

The incident occurred at the corner of Carlos Casares and Bartolomé de las Casas streets, on the border with the town of Isidro Casanova del La Matanza party, where the victim, identified as Sandra Borda (46), when he met his ex-partner and after a brief dialogue with the man, he received two shots that caused his death.

Judicial and police spokesmen informed Télam that members of the 5th police station. from San Carlos went to the scene after a call to the 911 emergency phone that alerted about the femicide.

At the scene, the agents confirmed Borda’s death and interviewed one of his sons, 29, who also had gunshot wounds to the shoulder and right arm, for which he was transferred in an ambulance to the Paroissien hospital in Isidro. Casanova.

Previously, the young man told the police that while walking with his mother and other relatives after leaving a fair, they met the victim’s ex-partner, whom he identified as Pedro Francisco Gaoarutti (44), who was in the interior of a black Peugeot 504 car parked on the street.

In these circumstances, which were recorded by a security camera, Borda approached to speak with the man, who had opened the door on the passenger side and after a brief dialogue Gaoarutti extracted a sawed-off shotgun and shot the woman and her son.

The attack was recorded in a security camera that captured the entire sequence, and in which it is observed how at a certain moment Borda is shot and falls to the ground badly injured, and her son must run when he is also hit.

Subsequently, Gaoarutti gets out of the vehicle and approaches his ex-partner, whom he hits with the shotgun twice, and after reloading the firearm he finishes her off with a shot to the head. Later, the man discards the shotgun in the car and drives off.

Judicial and police sources reported that the femicide tried to escape from the place on foot, but was hit by neighbors, who reduced him and began to beat him. Finally, the Police intervened, who apprehended Gaoarutti and arranged for him to be transferred to a hospital for the injuries suffered.

The forensics who worked at the scene determined that Borda had a firearm wound with an entrance hole in the neck and an exit in one of his cheekbones.

Meanwhile, the experts seized the murder weapon and found two shotgun shells inside the Gaoarutti’s car.

For their part, the researchers found that there were no previous complaints of episodes of gender violence and were trying to establish whether there was an economic debt that motivated the femicide, the informants added.

The prosecutor Marcos Borghi, from the Functional Instruction Unit (UFI) Thematic of Homicides of the La Matanza Judicial Department, intervenes in the case, who tonight supervised the tasks of the experts at the crime scene and ordered the survey of security cameras and of eyewitnesses of the fact.