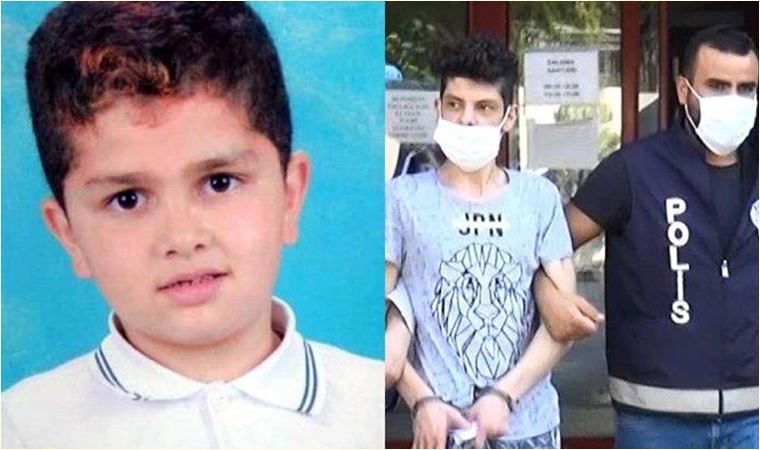 Sinan Yüksel, who lives with his family in the Kasaplar District of Antalya’s Manavgat district, said that he went to the police station on August 4 last year and killed his 8-year-old brother Seyit Taha Yüksel by stabbing him in the forest area of ​​Türkbeleni.

Police teams that went to the scene found Seyit Taha’s lifeless body. Upon examination of the body, it was determined that there were multiple stab wounds.

It was determined that Seyit Taha Yüksel, who was taken to Antalya Forensic Medicine Institute, had 27 stab wounds, 9 of which were fatal. In the report of the Morgue Specialization Department of the Antalya Forensic Medicine Institute, it was also stated that Seyit Taha Yüksel had stab wounds in the form of defensive wounds on both hands.

Following his proceedings at the police station, Sinan Yüksel was arrested by the magistrate, to whom he was transferred after the prosecution’s interrogation, on the charge of “deliberately killing a close relative”. It was learned that Sinan Yüksel, in his statement to the police and the prosecutor’s office, said that he used drugs and that he killed his brother out of jealousy because his family loved him so much.

‘I KILLED BECAUSE I DIDN’T LIKE, I DO NOT REGRET’

In the indictment prepared by the Manavgat Chief Public Prosecutor’s Office regarding the murder, the accused Sinan Yüksel said, “We are 3 brothers, I am the eldest. Seyit Taha is 8 years old. On the day of the incident, at around 15.00, I said to Seyit Taha, ‘Let’s go somewhere.’ I took the green-handled knife with me. I went to Türkbeleni with my brother. I first stabbed my brother in the back and then stabbed him in the front. I killed my brother because I did not love him. Then I went to the police station and surrendered. I want to stay in the cell alone. I wanted this situation myself. I have nothing else to say, I do not regret it.”

READ  This is what the digital corona vaccination certificate brings

In the indictment, it was also stated that Sinan Yüksel said that 15 days before the incident, he bought and used the 50 TL drug methamphetamine from someone he did not know at the park. In the indictment, he was reminded that the Alanya Training and Research Hospital reported that he did not have a psychiatric disease and that he had full criminal capacity, and demanded that he be punished for ‘deliberately killing his brother’.

The final hearing of the case was held at the Manavgat 1st High Criminal Court. While the accused Sinan Yüksel attended the hearing from prison via SEGBİS, the lawyer of the accused, his mother Alime and his father Osman Yüksel, the lawyer of the Ministry of Family and Social Services and the relatives of the parties were present in the hall.

‘WE DO NOT ACCEPT THE REPORT FROM THE FORENSIC MEDICINE’

Mother Alime Yüksel, who testified at the hearing, said that Sinan, who killed her young son Seyit Taha, was not a normal person and said, “We do not accept the report from the Istanbul Forensic Medicine Institute. Sinan was living in a fantasy world at home. He would not leave his room for days. He had no problems with his brother. “He was taking care of my young child, Seyit Taha Yüksel, because I was working. Sinan is not normal, we want a report back,” he said.

Father Osman Yuksel also said, “We do not accept the report from the Istanbul Forensic Medicine Institute. My son has been talking to the walls at home for 8 months. His mother said so. A report should be obtained again if he is in good mental health.”

The lawyer of the Ministry of Family and Social Services, who attended the hearing, also stated that the accused Sinan Yüksel was guilty and that they agreed with the prosecutor’s view on the merits and demanded that he be punished.

The defendant’s lawyer, who spoke at the hearing, stated that they did not agree with the prosecutor’s opinion on the merits. The lawyer, who said that his client was not normal, demanded that they did not accept the report from the Istanbul Forensic Medicine Institute and asked for a new report. The lawyer wanted his client to be acquitted or released on condition of judicial control.

‘I ATTENDED SUICIDE TO NOT GO TO THE HOSPITAL’

The presiding judge asked the defendant Sinan Yüksel, who reminded him that it was a decision hearing, for his last words. The accused Sinan Yüksel said, “I went to the police on the day of the incident myself. I told the incident. I did not run away. I do not want to go to the hospital. My psychology deteriorates further there. I attempted suicide to avoid going to the hospital. I regret that such an incident happened.”

After the break, the accused Sinan Yüksel was given an aggravated life sentence for ‘killing his own brother’. The delegation reduced Sinan Yuksel’s sentence to life imprisonment due to the defendant’s behavior and respectful behavior in court. After the verdict was read, the accused Sinan Yüksel said, “How long have I been sentenced to prison now? How many years in prison?” the president of the court asked, “You ask the execution prosecutor how many years the sentence will be. We gave a life sentence” said.