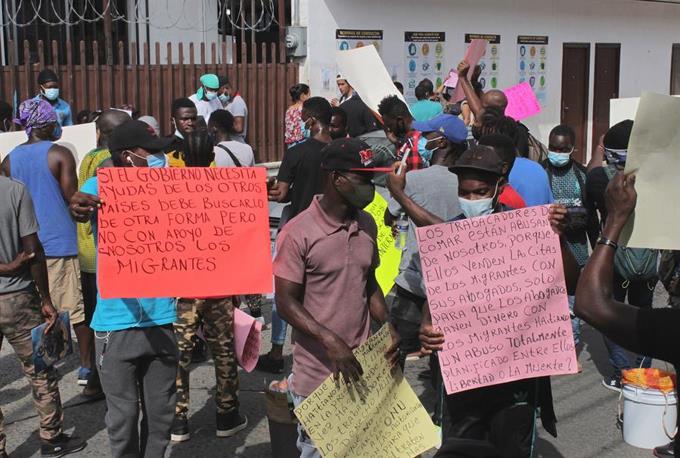 Dozens of Haitian migrants left this Monday to march through the streets of the Mexican municipality of Tapachula, in the southeastern state of Chiapas, to ask the Mexican government to provide them with documents to be able to move legally to the north of the country.

With banners, music and dancing, the Caribbeans marched about 2 kilometers for an hour and a half to the facilities of the Mexican Commission for Refugee Aid (Comar), where they intensified their claims to speed up their appointments and to start their electronic processing for a visa. humanitarian.

The foreigners ruled out going out in cavananas as other groups of several hundred who have left in recent days have done, but they have been repressed by the authorities who have prevented their passage.

The Haitians who marched on Monday argued that they do not want to risk their relatives in that long journey.

The foreigners said they are afraid of the security agents who are carrying out operations on the roads.

They warned that they are going to demonstrate every day so that the Government of Mexico provides them with documentation so that they can transit regularly.

In addition, another migrant reported that he was recently detained, preventing him from moving north, despite carrying his humanitarian visa.

The region is experiencing an unprecedented wave of immigration in years and, as proof of this, the United States detained 212,672 illegal immigrants on its southern border last July, the highest number in 20 years.

See also  Trial of the "cat man": the shocking details of the autopsy of the victims

The Mexican authorities disintegrated this Sunday a new migrant caravan -the fourth in the last week- that left from the Chiapas municipality of Tapachula, on the border with Guatemala, and was destined for the north of the country.