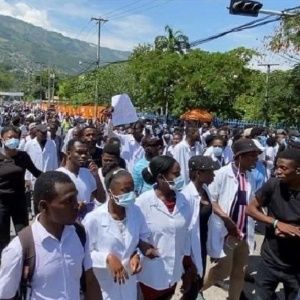 On Wednesday, hundreds of university students took to the streets of Port-au-Prince to demand justice for the death of Osny Zidor, a 27-year-old woman who was a victim of gang violence that controls Haiti.

UN warns of hunger and food insecurity in Haiti

The march started from the State University and headed towards Bois-verna, where the fifth-year medical student was killed. There, the citizens made moving messages and called on the country’s authorities to assume their responsibilities in the face of the phenomenon of uncontrollable insecurity.

The medical students also announced that they will hold a photo exhibition and other activities on Monday to pay tribute to his memory, Haiti 24 reported.

“Enough! Enough!», «We must stop arming the bandits who kill students», «We must put an end to the intrepid bandits who impose their law throughout the country», were phrases that people shouted at the march.

His life was taken by the gangs after 5 years of studying medicine. This photo taken from 2015 at Faustin Soulouque’s high school. She is indeed Osny Zidor, this sacrificed student.
Haiti becomes a banana republic, of gangs.

The tweet reads: “Gangs took his life after 5 years of studying medicine. This photo is at Faustin Soulouque High School in 2015. She is Osny Zidor, the sacrificial student. Haiti becomes a gang-controlled banana republic. Strength for the family!”

Over the last week, hundreds of families have fled the violence unleashed by armed gangs in Port-au-Prince and have taken refuge in schools, relatives’ homes or on the streets. Near the US embassy, ​​for example, people are camping in Clercine Square, carrying their belongings in backpacks and preparing their food in the open air.

Haitians try to avoid the violence generated by the clashes between the 400 Mawozo and Chen Mechan, two gangs fighting for control of the favelas of Croix-des-Bouquets, Croix-des-Mission, Butte Boyer and Bon Repos.

The internal displacement of the population, however, is not recent. Since June 2021, some 16,500 people have remained outside their homes in Port-au-Prince, according to UN data.