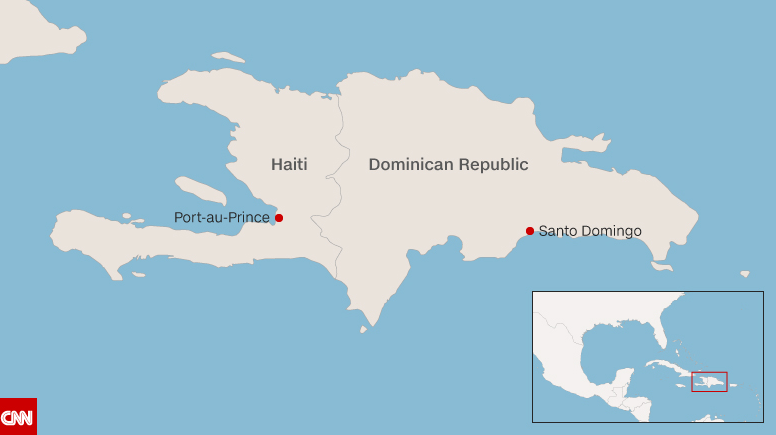 (CNN) — The assassination of the president of Haiti, Jovenel Moïse, has generated a new wave of uncertainty in a country battered in recent decades by political instability, poverty and natural disasters. And it is to be expected that the situation will also affect Haiti’s only neighbor, the Dominican Republic.

It was not yet clear who ordered Moïse’s death, but authorities have arrested members of an alleged Colombian command who initially sought to arrest the president, Colombian Police said.

Both countries share the island of Hispaniola, in the Caribbean Sea, separated by a border of just 376 kilometers.

But Haiti and the Dominican Republic live, at the same time, two very different realities, also separated by their levels of poverty, the wealth of their economies and the stability of their political systems.

Haiti, with its capital in Port-au-Prince, has a population of 11,198,240 people and an area of ​​27,750 square kilometers, occupying the western end of Hispaniola.

According to data from the World Bank, the country has a GDP per capita (PPP, adjusted according to purchasing power parity) of about US $ 2,925 with an agrarian economy, and poverty of 58.5%, according to the latest official data from 2012 (estimates The World Bank currently places it at 60%). With these numbers, it is one of the poorest countries in the world, and the poorest in the Western Hemisphere.

On this last point, however, the National Survey of Living Conditions (Encovi), promoted by three Venezuelan universities due to the lack of confidence in official reports, reported in 2020 that Venezuela had reached even greater poverty than that of Haiti.

On the other hand, the Dominican Republic has a population of 10,597,348 people and an area of ​​48,670 square kilometers, according to data from the CIA World Factbook, which is why it occupies most of Hispaniola, in its eastern sector.

Its GDP per capita (PPP) is about US $ 17,936, with a booming economy based on tourism, services and exports of sugar, coffee and tobacco, and 21% of its population is below the poverty line.

The Italian explorer Christopher Columbus descended on the island, inhabited by the Tainas, in 1492 on his voyage financed by the Spanish crown and named it Hispaniola (Hispaniola, in Latin). It is believed that there were 250,000 Tainas at the time of the arrival of the Europeans. However, by 1517 the population had dwindled to 14,000, mainly due to diseases brought in by Europeans, according to the Oklahoma Medical Research Foundation.

It was one of the richest colonies of its time, with an economy based on agriculture and slave labor.

In 1697 Spain recognized France’s right to the western third of the island, future Haiti, which became independent in 1804 after a slave revolt. It is the second country in America, after the United States, to become independent. While in the eastern sector the Spanish colony of Santo Domingo continued.

The Dominican Republic, on the other hand, was formed as a country in 1844, after spending 22 years under the control of Haiti. The country was back and forth between Spanish rule and independence until it finally declared independence for good in 1865.

The first century of French-speaking Haiti was marked, however, by instability and more than 70 dictators ruled the country, until US troops occupied the territory in 1915. They would stay there until 1934.

A new wave of instability followed, with different coups, frustrated democratic attempts and rebel uprisings, and in 2004 an international peacekeeping force was deployed by order of the UN Security Council – the Minustah – after a rebel uprising. .

Haitians wander the streets of Port-au-Prince, in front of a boarding school that was destroyed by the earthquake in January 2010.

In 2010, Haiti is hit by two disasters: an earthquake that destroys much of Port-au-Prince, kills some 217,000 people and leaves more than two million homeless, and a cholera epidemic that kills 6,600 people. On the other side of the border, where the earthquake had little effect and no deaths were reported, the Dominican Republic was the first country to send humanitarian aid to Haiti.

It was not the first time that a disaster hit the two countries unevenly. In 2004, Hurricane Jeanne, which made landfall in the Dominican Republic, caused floods that left 3,000 dead in Haiti. Only 19 deaths were reported in its neighboring country.

End of the UN mission

The United Nations Stabilization Mission in Haiti (Minustah) withdrew from Haiti in 2017. Currently the country is organized under a semi-presidential system, with an executive branch divided into a president and a prime minister, but always affected by political violence. in the streets and the difficulties in organizing elections: since 2020 the country functioned without a Congress.

After Moïse’s death, Acting Prime Minister Claude Joseph has taken over the country but the transition process is not yet clear.

The early years of the Dominican Republic were also marked by instability and political violence, periods among which are the dictatorship of Rafael Leonidas Trujillo (1930-1961) and the authoritarian government of Joaquín Balaguer (1966-1996), although since 1996 the country enjoys competitive elections.

A woman carries her belongings at the Petion-Ville market in Port-au-Prince, Haiti, on July 11, four days after the assassination of President Jovenel Moïse.

The country, whose capital is Santo Domingo, is organized under a presidential system and the position of president is now held by Luis Abinader. It also has a bicameral Congress made up of a Senate and a Chamber of Deputies.

The murder of Jovenel Moïse in Haiti, killed by an alleged Colombian commando at his home in Port-au-Prince, is the first assassination recorded in the country. But its neighboring Dominican Republic has two in its history.

Ramón Cáceres was assassinated when he was president of the Dominican Republic in 1911. While on his way to Haina, the horse-drawn presidential carriage was intercepted by a group of people, who shot at Cáceres, who died moments after his injuries.

While Rafael Leónidas Trujillo, described by CNN analyst and contributor Carlos Montaner as “perhaps the most bloodthirsty of all twentieth-century Latin American dictators,” was assassinated on May 30, 1961.

Editor’s note: this article was adjusted to correct the name of the current president of the Dominican Republic