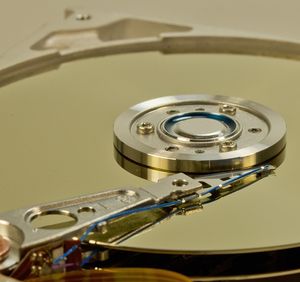 Cambridge scientists achieve a breakthrough thanks to the new coating

Cambridge (pte023 / 06/08/2021 / 12:30) – Researchers at the Cambridge Graphene Center http://www.graphene.cam.ac.uk have developed hard drives that store ten times more data. They covered the plates with a protective layer of graphene that is only a few atomic layers thick. It replaces the previously common coatings, which are also made of carbon but are many times thicker than graphene. The read and write head can thus float much closer to the rapidly rotating plate. This increases the storage density.

The protective layers are intended to protect the panels from damage and corrosion. At the same time, they have to let the electromagnetic pulses pass that occur during writing and reading. Carbon is ideally suited for this. An optimum is achieved in the form of graphs. The extremely thin foil made of carbon atoms, which are arranged in a honeycomb shape, is extremely abrasion-resistant and protects the sensitive plate at least as well as the thick carbon layer.

The amount of data that can fit on a hard drive has quadrupled since 1990. At the same time, the thickness of the protective layer was reduced from 12.5 to three nanometers. Now the distance between the read and write head and the hard disk can be reduced again. The researchers worked with a graphene-coated hard drive made of an iron-platinum alloy. In order to increase the storage density even further, they also decided to use heat-assisted magnetic recording (HAMR). The point that is to be written on is briefly heated by a laser before the writing process begins. In this way, the area that each bit requires can be significantly reduced

HAMR cannot be used with conventionally protected hard drives. Graphene, on the other hand, is extremely heat-resistant. Ultimately, the graph specialists achieved a storage density of ten terabytes per square inch. Hard drives dominate when it comes to storing large amounts of data. They are preferably used in stationary devices, not least because they are significantly cheaper than solid state disks (SSD). These have no moving parts and are faster than the HDD. That is why they are mainly used in mobile devices. Memory cards and USB sticks are also SSDs. The disadvantage: If the semiconductor-based memory is mechanically destroyed, the data is irretrievably lost. With HD, you can sometimes do something with special tools.