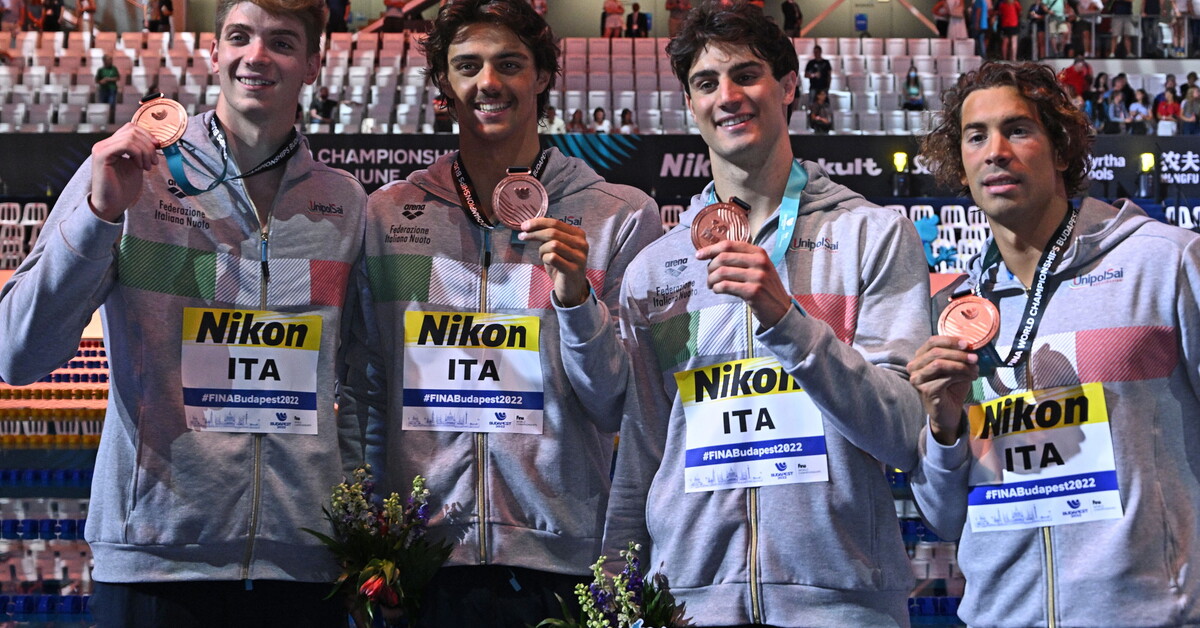 grande Italia in the men’s 4×100 freestyle, is bronze medal

The blue quartet made up of Frigo, Miressi, Zazzeri and Ceccon ends up behind only the United States and Australia

They kick off with a splendid bronze medal for Italy i Swimming World Championships of Budapest. On the first day of competitions, it is the relay that shines Men’s 4×100 freestyle composed by Manuel Frigo, Alessandro Miressi, Lorenzo Zazzeri and Thomas Ceccon. After the Olympic silver medal in Tokyo, another acute of the tricolor quartet that ends up behind only the United States and Australia. For Ceccon also arrives the Italian record in the 50 butterfly.


I swim
Federnuoto: 9-month disqualification for the Russian swimmer Rylov because he is pro Putin

Italy is immediately great at the World Swimming Championships in Budapest. On the first day of competitions Manuel Frigo, Alessandro Miressi, Lorenzo Zazzeri and Thomas Ceccon conquer a splendid bronze in the men’s 4×100 freestyle. Another beautiful result after the silver at the Tokyo Olympics: Miressi starts well but then pays the effort in the return pool, then a wild Ceccon thinks about starting the comeback and Zazzeri completes bringing the Azzurri to second place. In the last fraction Frigo holds out until the last but in the end it is Australia that ends up behind the United States, for our quartet it is still a magical bronze with a time of 3’10 ” 95.

Italy smiles twice with Thomas Ceccon, in a state of grace and author of the Italian record in the 50 butterfly just before going into the water for the relay: a double record, in fact, because the 21-year-old from Veneto first signs the record in the battery in the morning, then he tweaks his own time in the semifinals with an amazing 22”79, thus conquering the final. Fifth place instead for Marco De Tullio in the final of the 400 freestyle, with a hint of regret after the 21-year-old from Puglia had been in third position for a long time during the race won by the Australian Winnington. Tomorrow second day of competitions with the finals of the men’s 100 breaststroke (great anticipation for Martinenghi, today with the best time), 100 female dolphins, 50 male dolphins and 200 female medley.