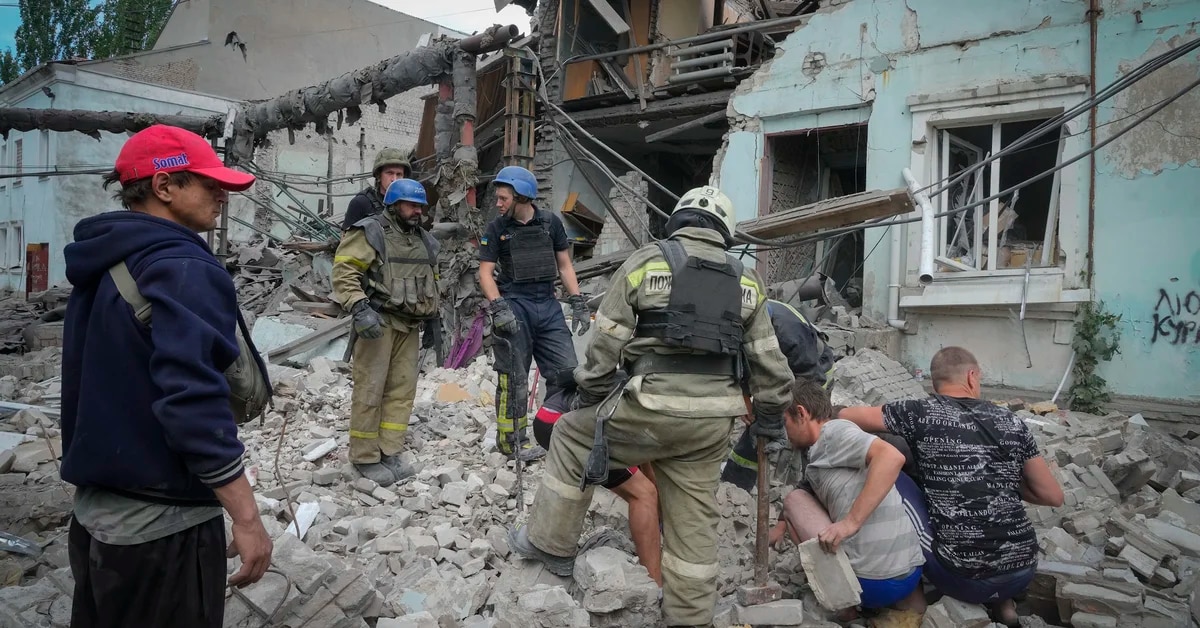 Rescue tasks after a bombing in Lysychansk, in the Luhansk region (AP)

Sergei Gaidai, governor of a region in eastern Ukraine that has been constantly bombarded by Russian forces, shows the pockets of his bulletproof vest full of ammunition and emergency material. “You have to be prepared for the worst,” she says.

Appointed by President Volodimir Zelensky, this 46-year-old man is in charge of the Lugansk region, where the city of Severodonetsk, where fighting between Russian and Ukrainian forces is taking place, and the town of Lysychansk, under fire, are located. of artillery.

“The situation is difficult, in the city (of Lysychansk) and in the whole region”, he says in an interview with AFP. The Russians “bombard our positions 24 hours a day”, dice.

In Lysychansk, everything is getting ready for street fighting: soldiers dig holes and put up barbed wire, and police place burnt-out cars in the streets to slow down traffic.

“An expression says: you have to prepare for the worst and the best will come only,” says Gaidai. “Of course we have to prepare,” reiterates the official, who has already warned several times that Russian troops will eventually surround Lysychansk and cut off the main supply roads.

“It’s a war, anything can happen”, dice.

From Lysychansk, the Ukrainian artillery attacks the Russian positions in Severodonetsk, and the Russians respond with mortar and rocket fire.

Raisa, a resident of Lysychansk, cries in front of the rubble of a destroyed school (AFP)

“Look how Severodonetsk resisted: you can see that they don’t fully control it… They can’t go faster (nor) place their big guns and tanks,” the governor explains.

Like other Ukrainian officials, he hopes that Ukraine’s Western allies will deliver more “long-range weapons” to them “as soon as possible”. “It is good that the West helps us, but he comes late”, he laments.

The governor could go to Severodonetsk to see how his troops are doing, “but it is extremely risky.”

In fact, “there is no safe place in the whole Luhansk region”, he admits, while explosions are heard in the surroundings.

His bulletproof vest is full of cartridge cases, and he has a semi-automatic rifle in his car. “If necessary, I will fight“, He says. Gaidai, born in Severodonetsk, was appointed by Zelensky after his election in 2019.

“I’m here to help people in any way possible,” he explains of this wartime administrator job that forces him to “keep (his) emotions to (him)”.

“It hurts me to see how my hometown is being destroyed“, He says. Also seeing how the war kills people he knows: “I am a human being, but I bury all this deep inside me.”

Life is very hard for the 10% of the inhabitants of Lysychansk who have stayed in the city, without a telephone network, running water or electricity. They cook with firewood and live in sheltered cellars.

“We try to convince them to leave”, but “some categorically refuse”. And only a “small percentage” expect Moscow to make their region a “Russian world”, according to him.

Governor Gaidai communicates daily about the state of the conflict, through social networks such as Telegram or Facebook.

“We need to talk” to counter Russian propaganda, but also so that the people of the region “understand that we have not abandoned them, that I am here with them,” he says.

He also believes that his messages have another possible use: to help convict Russian President Vladimir Putin “when we bring him to justice at (the International Criminal Court in) The Hague.”

(With information from AFP/by Anna Malpas)

Jens Stoltenberg assured that with more modern weapons, the chances of Ukraine expelling Russian troops from Donbas increase.
Boris Johnson said that the war in Ukraine will be long and the country will need support for years