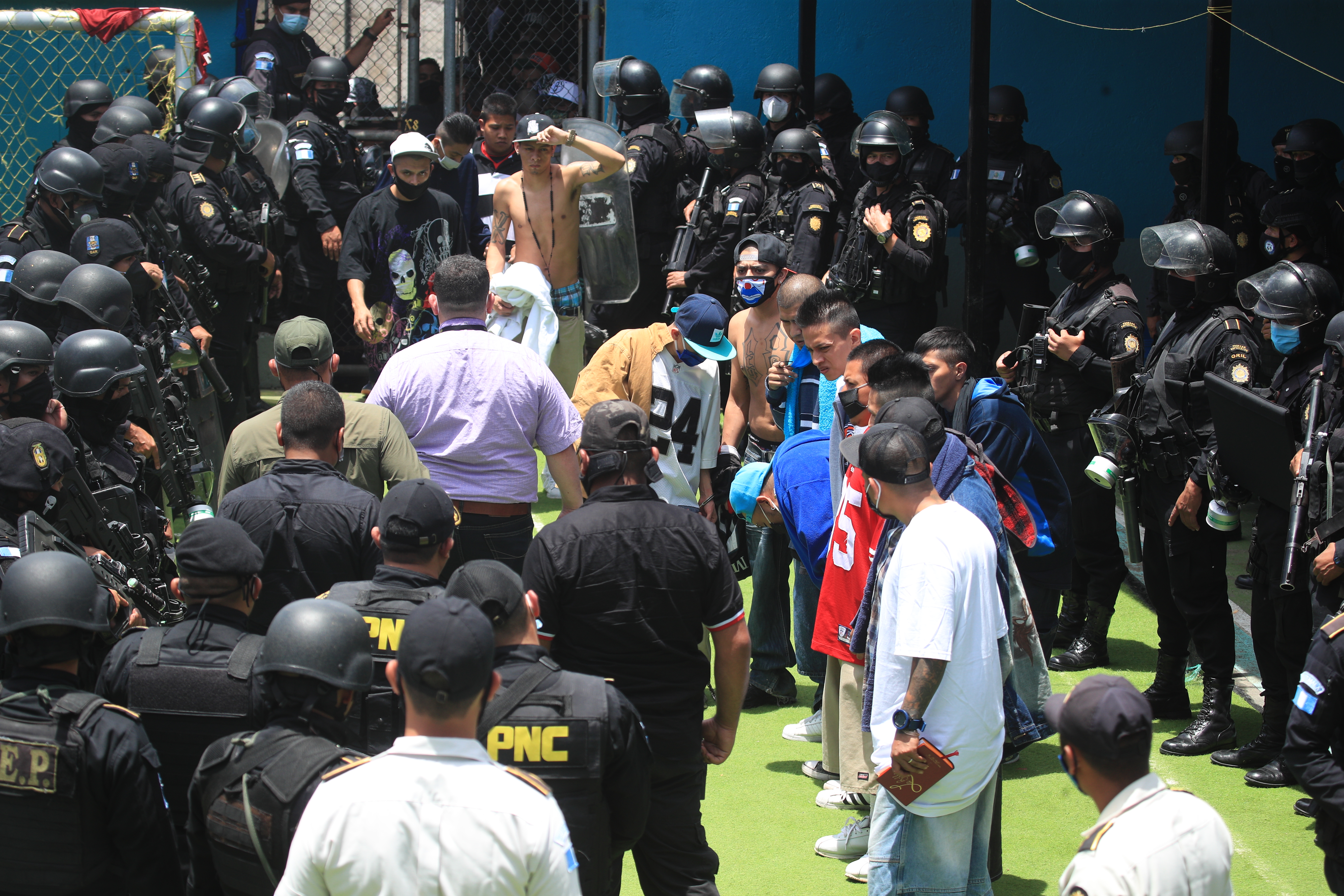 Government isolates and transfers gang leaders and they react with violence

The Ministry of the Interior (Mingob) and the Directorate of the Penitentiary System (DGSP) They decided to transfer on Wednesday, May 18, at least 76 leaders of the Barrio 18 gang from the preventive for men in zone 18 from the capital to the Fraijanes II prison in that municipality.

The objective: to prevent these subjects from continuing to direct their extortion operations from within the prison and to reduce the attacks against those people who did not pay these illegal extortions.

One day later, On Thursday, May 19, the Mingob published on its social networks, with great fanfare, that they had managed to prevent someone from dying violently in 24 hours. in the national territory.

Carlos Mendoza, director of civil organization Diálogos, about this announcement, considered as a “hasty triumphalism of the Mingob with the zero homicides on May 19”. He argued that “the efforts must be sustained so that the results are also sustained.”

Mendoza indicated that it had taken the authorities 8,410 homicides – 784 days – to return to having a day without violence.

Nevertheless, Between Friday the 20th and Saturday the 21st, things changed dramatically. Of the 68 violent deaths registered by the National Civil Police (PNC) until yesterday, 20 were between those two days in which this spiral of violence was unleashed in the department of Guatemala, especially, and in municipalities such as Chimaltenango, Escuintla, Jutiapa and Quetzaltenango.

The reasons? An investigator from the National Civil Police (PNC) visualized three variables that triggered this criminal wave.

The first: the dispute over territories between rival gangs to extort money and sell drugs at retail. The second: the isolation of the leaders of the Mara Salvatrucha (MS-13) (almost 200 in Pavoncito prison) and Barrio 18 (some 76 in Fraijanes II). And the third: the dispute between gang members to seize the cliques of the individuals who are in those prisons.

The two years of the pandemic reduced the operability of these structures, however, with the release of restrictions, the cases rose.

See also  She still had many plans - Aargauerin won 184 million, remained humble and has now died

The latest report on extortion by the civil organization Dialogues reveals that during April 2022 “In the Republic of Guatemala, a total of 2,083 extortions were registered.” A figure that puts into context the struggle that is going on within the criminal groups and that afflicts the population.

However, despite the fact that in recent weeks there had been an escalation of violence for this reason, the Mingob coordinated efforts with the MP to combat the groups. Between raids, searches and transfers of prisoners, he sent the message that he wanted to stop the situation.

To counteract the situation, which began last Friday and Saturday, and worsened until yesterday, the authorities organized searches in some of the country’s prisons to stop the criminal wave that has claimed the lives of at least 68 people, including an 11-year-old boy.

After having taken the members of Barrio 18 to Fraijanes II, they were able to enter in sector 11 of the zone 18 preventive where they not only found a raccoonbut three fragmentation grenades, firearms, more than 60 cell phones, liquor and beer, and more than Q3 thousand in cash.

How did it all begin?

In the first year of government of Alejandro Giammattei Everything indicated that his main campaign offer would be fulfilled: fight the gangs to curb crime.

However, the covid-19 pandemic, the constant states of exception and mobility restrictions put a stop to their plans.

Nevertheless, on August 20, 2020, after the government reopened commerce the phenomenon of extortion reappeared, not to a great extent, but it did affect the population.

This led the Mingob and the DGSP to transfer the leaders of Barrios 18 from the El Infiernito maximum security prison in Escuintla to the zone 18 preventive prison.

#Escuintla | Authorities from the Ministry of the Interior report that inmates from the El Infiernito prison rioted and are holding about six guards from the Penitentiary System due to disagreement with the transfer of inmates that is being carried out. pic.twitter.com/SXNHrfG3Dq

In September there were problems with one of these, Aldo Ochoa Mejia, aka El Lobosentenced to more than a thousand years in prison for various murders, and was taken to the Matamoros prison.

The same thing happened with MS-13 leaders who transferred them to Pavoncito and other prisons to prevent them from continuing to commit crimes.

A similar situation occurred in August 2021only this time the rest of the members of the gang 18 imprisoned in El Infiernito, provoked a revolt and took guards from the Penitentiary System as hostages.

After the dialogue they were released, but since that day, according to PNC investigators, this group separated from the one that had been transferred a year before to the zone 18 preventive and each one operated independently.

It was then that with the total release of the restrictions, each group wanted to regain power in their territories and that triggered the wave of violence that is currently being experienced.

Due to the taking of hostages in “El Infiernito”, the authorities established a dialogue table to free the detained prison staff. https://t.co/OBK1DK7jLc

But what made it worse? According to sources of the Mingob and the MP were once again the transfers to other prisons of the leaders of both criminal structures.

On May 18, they transferred the 76 dangerous members of Barrio 18 to Fraijanes II. The rest stayed in El Infiernito, and from there they maintain their operations. This dispute could have been, according to experts, a breaking point to generate the violent events of recent days.

The spokesman for the DGSP, Carlos Morales, confirmed that the transfer on May 18 was a strategy of organization in the prison centers ordered by the head of the Mingob, Napoleón Barrientos, and the authorities of the Penitentiary System.

See also  After being disappeared, they find mother and daughter; one is dead

“The objective is to order the prison centers and reduce the rates of extortion that are planned and executed from there. The plan is for the reorganization of those deprived of liberty”, he argued.

Assaults, shootings, extortions, murders: the figures and the stories of residents during a tour of the areas most affected by violence in Guatemala. https://t.co/lLzJqc5dXS

The head of the Mingob assured that the searches will continue because they have given them results to stop the current criminal wave.

The head of the Prosecutor’s Office against Extortion, Emma Flores, explained that they will continue with the operations to dismantle the structures that continue to extort money from Guatemalans.

He agreed with the head of the Interior that, between the raids and the searches, they will insist on reducing the rates of violence in the country.

The Prosecutor’s Office against the Crime of Extortion of the @MPguatemala and support of @PNCdeGuatemala They carry out the 51 raids against extortion in Guatemala, Mixco, San Juan Sacatepéquez, Villa Nueva and in Escuintla, Suchitepéquez and Retalhuleu. pic.twitter.com/F5GgopHNXO

Mendoza, from Diálogos and Sandino Asturias from the Forum of Social Organizations Specialized in Security Issues (Foss), the government keeps intact the example of El Salvador to repress gangs.

Both experts considered that “the authorities believe that penal populism is the solution.” What is happening in El Salvador is very serious, Asturias considered, and the situation of violence is going to worsen, he argued.