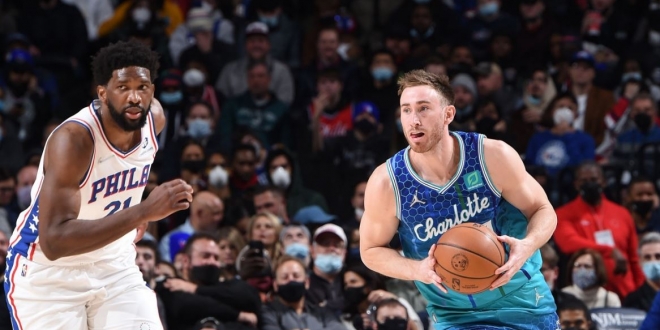 The full results of the night in stats and highlights, it’s here!

(find the summaries of the 3 other posters here)

End of series for the Sixers, who undergo the law of the Hornets in front of their public, 109-98. Joel Embiid signs a 5th game in a row at 31 points, but opposite the Hornets rely on an excellent trio Gordon Hayward (30 points at 13/16 including 4/4 at 3-pts and 7 assists), Miles Bridges (21 points at 9/20) and Terry Rozier (22 points at 10/18). This is the 4th success in a row for Charlotte, who made the difference in a second quarter won 30 to 15 and then controlled the meeting with a mattress of ten points. The locals have never been able to make the slightest run.

After a sluggish start to the match, Miami passed the second! First with a 35-24 inflicted on the Hawks (3rd loss in a row) at home in the 2nd quarter then by scoring the first 16 points of the 2nd half to allow Miami, led by 21 points to 9 / 19, 9 rebounds and 11 assists from Tyler Herro to definitely fly away and finally win 115-91 (3/3). Caleb Martin ends him at 18 points and Miami despite many absent including Jimmy Butler, ends his road trip with a record of 4 wins for 2 losses.

The Cavs’ 111-91 victory on the Jazz floor with a Lamar Steven in career record mode: the 24-year-old winger scored 23 points including 15 in the 3rd quarter, dominated 30-16. Darius Garland recorded his first triple-double with 11 points, 10 rebounds and 15 assists (career-high). Lauri Markkanen added 20 points, Kevin Love 16 and Evan Mobley 15 points, 10 rebounds and 7 assists (career record). Without Gobert, Whiteside, Azubuike and Gay, Utah started the match with Royce O’Neale as the pivot.