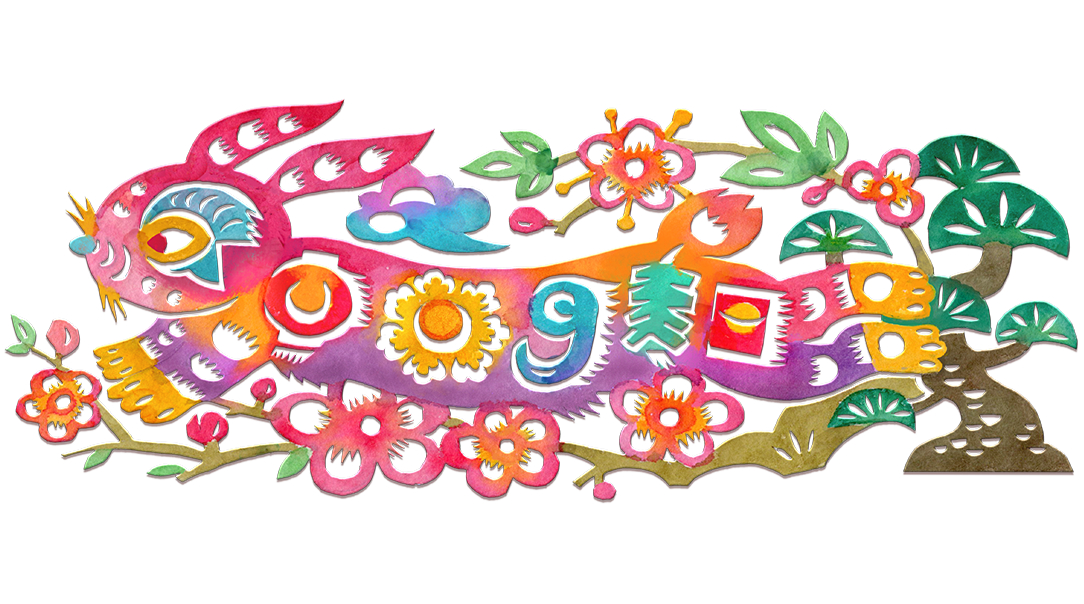 Google celebrated the start of the Lunar New Year 2023 with this Year of the Rabbit Google Doodle on Jan. 22, 2023.(Image credit: Google)

A new lunar new year is hopping off to a great start and Google is marking the occasion with a series of Google doodles.

The Lunar New Year 2023 began today (Jan. 22) marking the start of the Year of the Rabbit on the lunar calendar, with Google celebrating with an ornate stylized logo with the company’s name inside a hopping rabbit.

“After the first new moon of the Lunar calendar each year, communities around the world set up decorations, make festive food and gather with loved ones to usher in the new year,” Google wrote in a doodle explainer (opens in new tab).

Related: What moon phase is it today? Moon phases 2023 explained

“The traditions of the Lunar New Year festival date back thousands of years to a popular legend. A mythical beast called Nian was known to show up each Lunar New Year’s eve and terrorize people and livestock,” the company added. “Loud noises, the color red and fire scared Nian away, so it became a tradition for families to decorate their doors in red paper, set off fireworks and leave lanterns burning all night.”

“This year marks the Year of the Rabbit, which is associated with peace and prosperity,” Google wrote in its description. The Doodle artwork is crafted from paper to honor Chinese paper-cutting (Jianzhi), which is a long-time Lunar New Year tradition.”

“Known as Tet in Vietnamese, this holiday is celebrated by communities each year during Tet festival, people often travel to the homes of their extended families and bring in the new year with feasts. Tet festival is traditionally celebrated across three days to spend time connecting with friends and colleagues and visiting temples and ancestral burial sights. During family feasts, people typically eat vegetables, banh chung (sticky rice cake), and cu kieu (pickled scallion),” Google wrote.

“This year marks the Year of the Cat, which is associated with prosperity, cleverness, and skillfulness. The Doodle artwork is crafted from paper to honor the paper folding & cutting art traditionally practiced during Lunar New Year.”

If you’re looking for some amazing sights to mark the lunar new year, Venus and Saturn will shine extremely close together after sunset in a planetary conjunction. You can watch the Venus and Saturn conjunction in a free webcast at 11 a.m. EST (1600 GMT).

Tariq is the Editor-in-Chief of Space.com and joined the team in 2001, first as an intern and staff writer, and later as an editor. He covers human spaceflight, exploration and space science, as well as skywatching and entertainment. He became Space.com’s Managing Editor in 2009 and Editor-in-Chief in 2019. Before joining Space.com, Tariq was a staff reporter for The Los Angeles Times covering education and city beats in La Habra, Fullerton and Huntington Beach. In October 2022, Tariq received the Harry Kolcum Award (opens in new tab) for excellence in space reporting from the National Space Club Florida Committee. He is also an Eagle Scout (yes, he has the Space Exploration merit badge) and went to Space Camp four times as a kid and a fifth time as an adult. He has journalism degrees from the University of Southern California and New York University. You can find Tariq at Space.com and as the co-host to the This Week In Space podcast (opens in new tab) with space historian Rod Pyle on the TWiT network (opens in new tab). To see his latest project, you can follow Tariq on Twitter @tariqjmalik (opens in new tab).