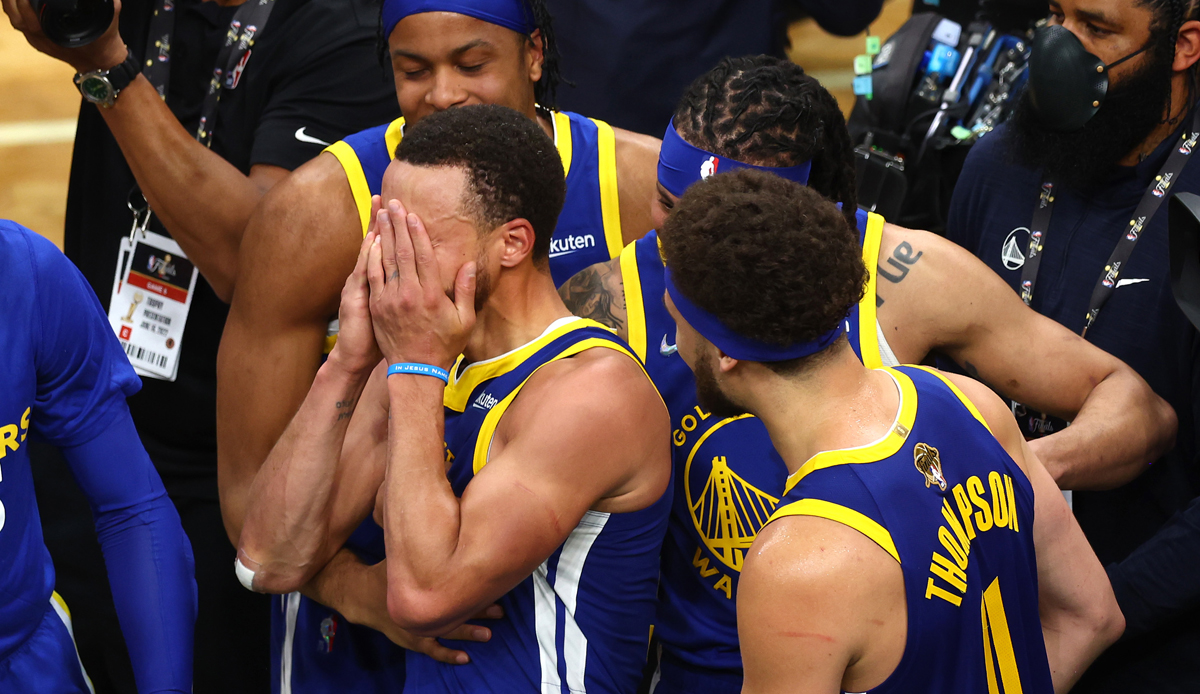 Championship number 4 for Stephen Curry and Co.! The Golden State Warriors became NBA champions after beating the Boston Celtics 103-90 in Game 6 of the NBA Finals. Curry punished the Celtics’ error festival with his scoring.

Following Game 6, Curry was unanimously voted Finals MVP for the first time in his career. Over the entire series, the 34-year-old put up 31.2 points and 5 assists with 48.2 percent from the field and 43.7 percent from downtown.

At the other end, Jaylen Brown defended himself with 34 points (12/23 FG), but Jayson Tatum couldn’t put his stamp on the game (13 and 7 assists with 6/18 FG and 5 turnovers). In general, Boston made life difficult for itself with far too many ball losses. Al Horford led another comeback attempt with a double-double (19 and 14 rebounds), but that wasn’t enough.

There were no changes in personnel on either side, but there were in terms of play. Boston started with numerous post-ups to play to the economies of scale. The Celtics generated a good offense, Tatum and Brown completed a 12:2 start – the Celtics fans could be heard loudly right away.

With smaller lineups during the first quarter, the Celtics offense had more problems, and there were several turnovers on both sides. Golden State came into play better and better, even Green sank his first three of the finals. Curry and Poole also hit the backboard from downtown and the visitors ended the period with an 11-0 run. 27:22 Warriors.

After only 1:50 minutes in the second round, Celtics coach Ime Udoka had to burn two time-outs, but he couldn’t stop the now red-hot dubs. Poole barely missed, Wiggins slammed a loss, 21-0 run and 15-point lead for Golden State! Boston responded with a 7-0 run of their own, boosted by one spectacular block by Robert Williams III against Curry. Turnover continued to bother the Celtics, Golden State dropped to +21, and the fans in the TD Garden punished it with loud boos. It went into the cabins at 54:39.

Draymond started the second half with his second three, while Horford kept his colors in play with several of his own. But the Warriors shooting was just too much, Curry already smelled the championship and hammered a three from the parking lot to 72:50 through the trap. Boston still had some life left, thanks in large part to Horford, who cut to -9 with an and-one and a block. The hall was back, Green hit his next jumper. 76:66 Warriors.

But: The Celtics started again with several ball losses in the final quarter and could not crawl any further. On the other side, the Warriors missed eleven threes in a row across quarters. Wiggins cleared Tatum, but a corner three from Brown set it to -8 – and Wiggins answered from downtown. In transition, Golden State penalized the next Celtics turnover.

Shortly thereafter, Curry sank his sixth three of the night and celebrated with a “Good Night” gesture. The game was actually over three minutes before the end (+15), the Celtics had no answer ready. The Warriors have won the NBA title for the seventh time in their franchise history!

The most important statistics

NBA Finals – Celtics vs. Warriors: The Voice of the Game

Steve Kerr (Warriors-Coach): “That was maybe the most unlikely of our four titles. I hang out with superstars, that’s where good things happen. Curry is the reason for all of that.”

The star of the game: Stephen Curry

Draymond deserves huge credit for his two-way performance, while Wiggins was strong defensively and on the boards. But of course there is no getting around curry. Sometimes a simple pump fake was enough to send two defenders into the air and then calmly sink a triple. Then again he scored several times after strong drives in important moments. There is no doubt about this Finals MVP award.

The flop of the game: Jayson Tatum

For an elimination game, that was far too little of the Celtics’ superstar. In the final section he himself refused a relatively open corner three and instead made a step mistake. Tatum has nearly as many turnovers (5) as successful field goals (6), becoming the first player to lose 100 turnovers in a postseason.

The scene of the game

There were still 18 minutes left on the clock, but Curry was already certain in the middle of the third quarter: Ring number four is mine. Even several meters behind the line of three, two Celtics defenders blocked the chef’s way in transition – he still pulled the trigger, nothing but net! Addressing the Celtics fans, he then pointed to his ring finger…