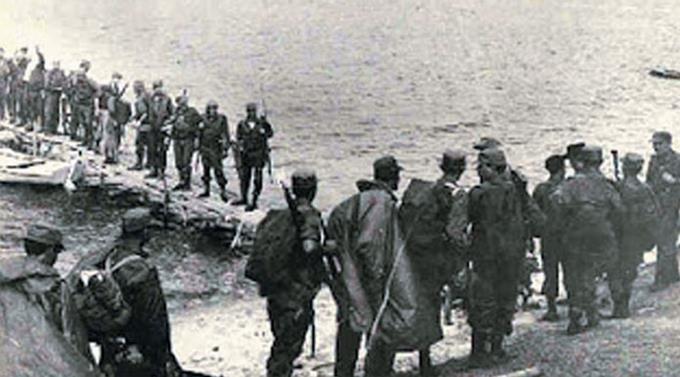 62 years have passed and the Dominican people still remember that June 14, 1959, the day on which 198 men of different nationalities embarked on an expedition that involved sacrificing their lives in exchange for ending the dictatorial regime of Rafael Leónidas Trujillo.

The “Glorious Gestation of Constanza, Maimón and Estero Hondo”, as the heroic expedition is also called, was the third anti-Trujillo movement that tried to free the Dominican people from the dictatorship that had lasted since 1930.

Although this effort was defeated at the hands of the despot’s Army and Air Force, who were outnumbered by men and weapons, concluding in the torture and murder of those involved, it managed to ignite the “august flame of freedom” in the Dominican people.

Along with the Dominicans, expedition members from Guatemala, Puerto Rico, the United States, Spain, Cuba and Venezuela also joined, who equally pursued a common goal: to fight the worst one-man dictatorship on the continent.

Only the Dominicans Poncio Pou Saleta, Mayobanex Vargas, Francisco Medardo Germán and the Cuban expedition members Pablito Mirabal and Delio Gómez Ochoa survived the inhumane torture to which the expedition members arrested by the regime were subjected. The latter, 62 years later, is the only one that survives.

They step on Dominican soil
The expedition, organized by the Dominican Liberation Movement in conjunction with the peoples of Venezuela and Cuba at that time, resulted in the accentuation of national and international political opposition against the Trujillo regime.

Long before starting the operation, the group of guerrillas was already receiving military training in the camp located on the “Mil Cumbres” farm in the Pinar del Río province, in Cuba. Another group trained in parallel in “Madruga”, located in Havana, the capital of the country.

Preparation on foreign soil allowed the insurgents to have greater facility for planning, action and training, avoiding being accused of conspiracy against the stability of the Dominican government.

On June 14, 1959, after gathering enough funds, weapons and people for the battle, the expected moment arrived: they would end the repression of Trujillo once and for all. It was 6:20 in the afternoon when the first group of guerrillas began to be seen in the air on board a plane that displayed the initials of the Trujillo Air Force to go unnoticed.

Supported by Fidel Castro and led by the commander-in-chief of the Dominican Liberation Army, Enrique Jiménez Moya, a total of 56 combatants set foot on Dominican soil, specifically at the Constanza military airport.

The plans were for the landing to take place in San Juan de la Maguana, however, the atmospheric conditions forced the Venezuelan pilot Julio César Rodríguez and the former captain of the Dominican Air Force, Juan de Dios Ventura Simó, to descend in the north of the country.

Immediately they arrived, the combatants exchanged shots with soldiers who were approaching the aircraft to find out about the landing. The guerrillas quickly left the plane and went into the mountains, a group of 36 men took refuge in El Río and Tireo, while the rest went to Los Botados.

According to the plans, the arrival of the plane had to be done simultaneously with that of two boats led by other expedition members, however, the maritime landing took place six days later due to the obstacles that arose.

Those who arrived first were instructed not to fight until the remaining expeditionaries anchored in the boats, however, they faced constant persecution by Trujillo troops that cost them their lives.

By the 19th, 20 guerrillas had been captured and liquidated, a day later there were 42 dead and two prisoners, including among the dead the pilot Juan de Dios Ventura Simó.

On June 20, a total of 121 men arrived in Maimon in the “Carmen Elsa” boat, commanded by José Horacio Rodríguez. At the same time, in Estero Hondo, 48 expedition members landed, traveling in the ship “Tinina” with José Antonio Campos Navarro as commander.

Her ideals.
In honor of the bravery and heroism of these combatants, a year later the underground movement “June 14” was organized and adopted their ideals, and a monument was erected to recognize the intrepid feat.